Overall, Pittsburgh ranks second in a list of MLB fanbases that swear in subforums. 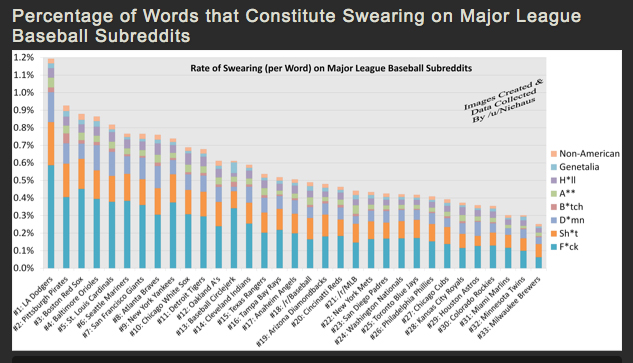 Foursquare had it all wrong a few years ago. We 'Burghers aren't rude; we're quite the opposite. We just have a little potty mouth, as evidenced by the repeated use of curse words in the check-ins (one of the criterion for the designation).

Redditor Niehaus cuts to the chase with the above rundown of Major League Baseball fanbases that have a tendency to swear in subreddits.

You'll notice that we came in second overall. We're not going to pretend we're angels or anything; instead we'll just say that this shows we're passionate about baseball. #GoBucs

If wearing black and gold weren’t enough, now you can eat it. Mrs. T’s Pierogies is partnering with the Pittsburgh Steelers to release limited-edition black and gold pierogies in time for football season. These Pittsburgh-favored delicacies, sold at area retailers, are filled with cheddar cheese and whipped potatoes and wrapped in ingestible team spirit a la colored pasta shells.