The architectural designers were married at Carrie Blast Furnaces in an ode to their passion for architectural history and adaptive reuse. 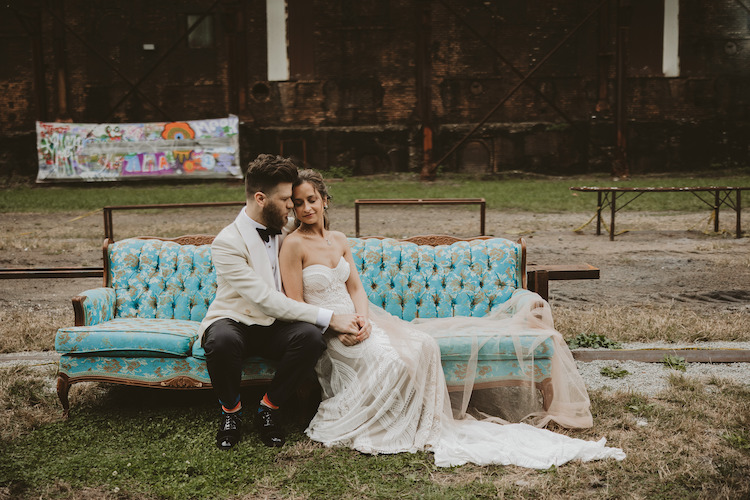 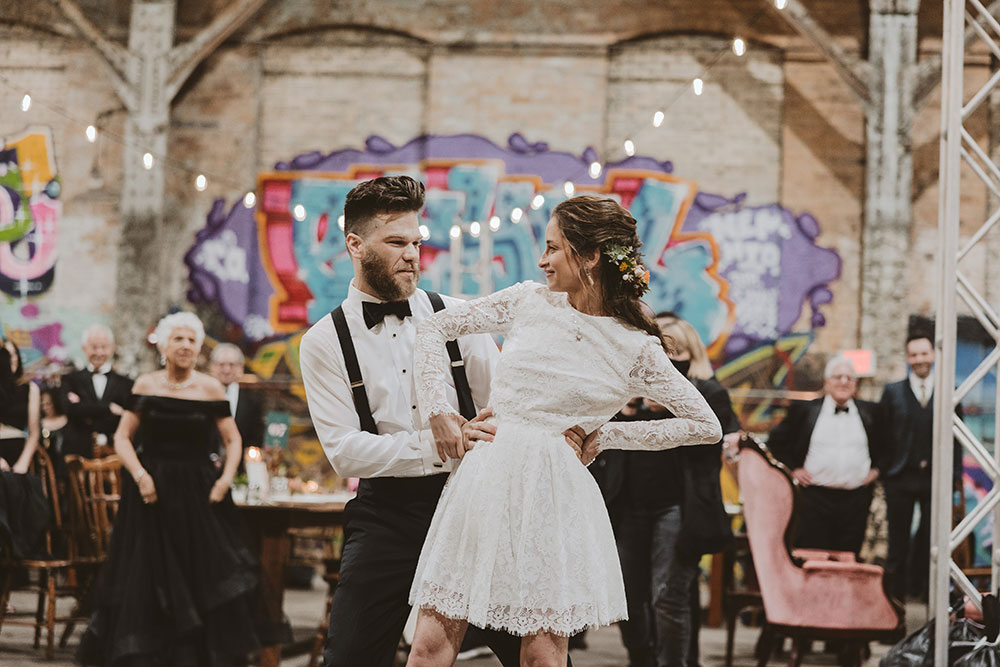 Talia Pinto-Handler and Ivan Adelson met at the University of Michigan while they were both studying architecture. When they first met is a “point of contention” as Talia remembers meeting Ivan before the events making up Ivan’s first memory: Talia passed by Ivan while he was in the middle of a conversation and said hello. He simply stared at her.

Ivan’s lack of response led her to just walk away after a moment — when she overheard Ivan call her an eavesdropper for interrupting his conversation. “It’s not the stuff of romance, but it speaks to our relationship,” Talia says. “We poke a lot of fun at each other and we’ve been that way from the start.”

They took a study abroad trip in Paris during the summer of 2010, where they say their relationship blossomed as they connected over their studies of France’s preservation of industrial architecture. 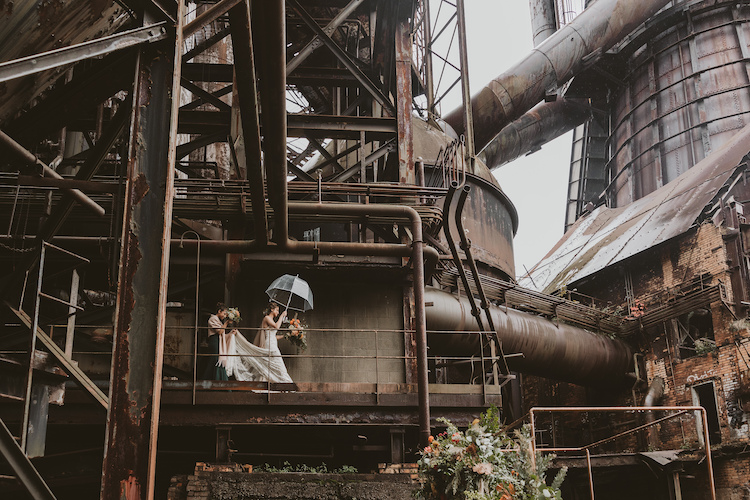 After dating long distance during their graduate studies, the couple moved to New York City. When the coronavirus pandemic hit, they moved into Ivan’s parents’ basement in the suburbs of Detroit. Ivan had designed an engagement ring with his father, a jeweler, and says the uncertainty of the pandemic propelled him to make his move — wanting to move through life with Talia was one thing he was absolutely certain of.

They returned to the University of Michigan’s Nichols Arboretum, where they had spent time together as undergraduates, for a walk with one of Talia’s friends. Ivan had scoped out an amphitheater for the proposal, but upon getting there, Talia called it lackluster — right as Ivan was getting down on one knee. Still, she said yes, and Ivan’s mom emerged from her hiding spot in the bushes after photographing the proposal while nearby college students cheered them on. 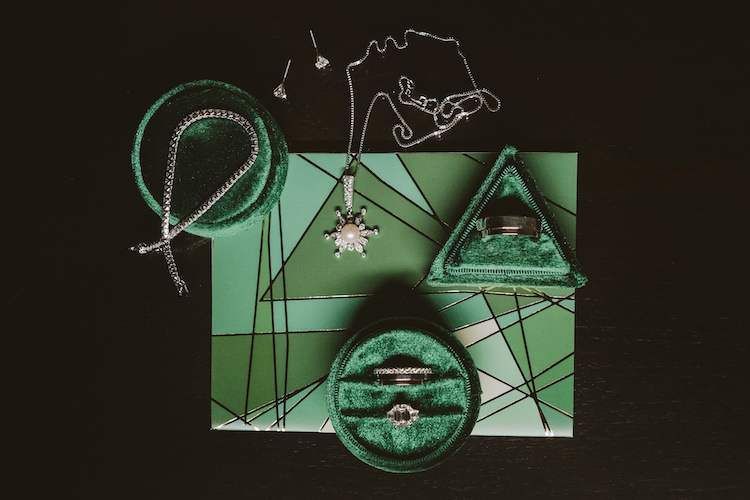 In an ode to their passion for architectural history and adaptive reuse, Talia and Ivan chose to get married at the Carrie Blast Furnaces in Swissvale — and came up with a fitting hashtag: #ivancarriestaliaway.

“We were finding ways to bring where both of us come from, our experiences in the world, our design and aesthetic interests all wrapped up in one awesome space,” Ivan says.

To honor their Jewish heritage in a way that felt authentic to them, the couple designed their own ketubah, a text reflecting their goals for their marriage, and had seven readings from family and friends in lieu of the traditional seven blessings.

For their reception at the furnace’s power house, they juxtaposed the industrial design of the furnace with a black tie event and the decay of the venue with a “pop vibe” featuring white balloons and bright colors. With Motown music playing throughout the night in a nod to the Motor City, and a small celebration for Ivan’s parents’ 40th anniversary, the couple was able to celebrate the day in a reflection of who they both are. 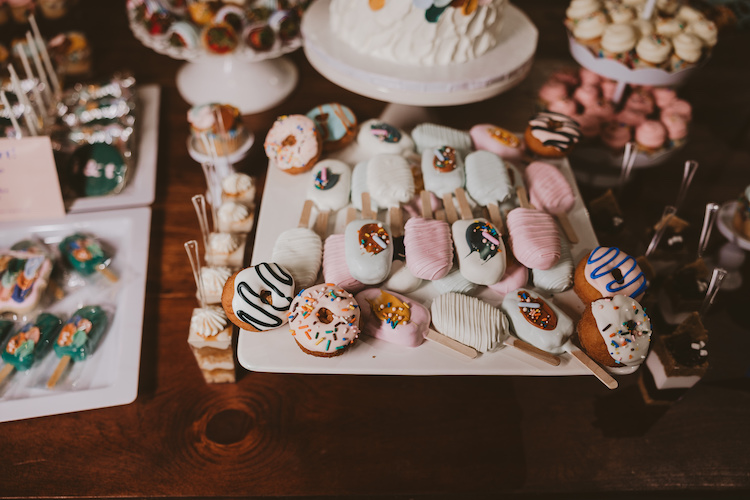 Talia and Ivan, both 34, live in New York City with their Welsh terrier, Bowie. They are both architectural designers — Talia works for Gensler and Ivan for Meier Partners — and they expect to receive their architecture licenses in the coming months. 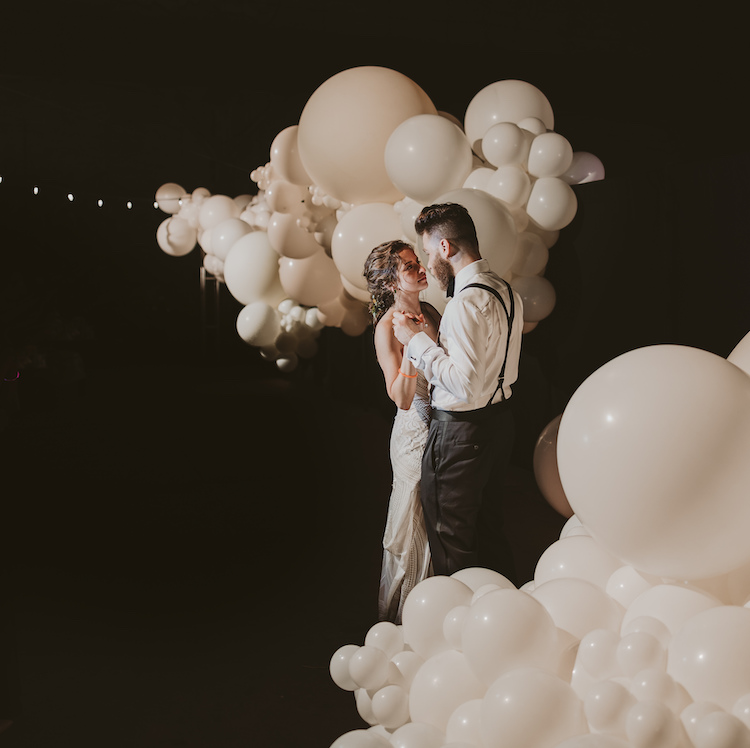