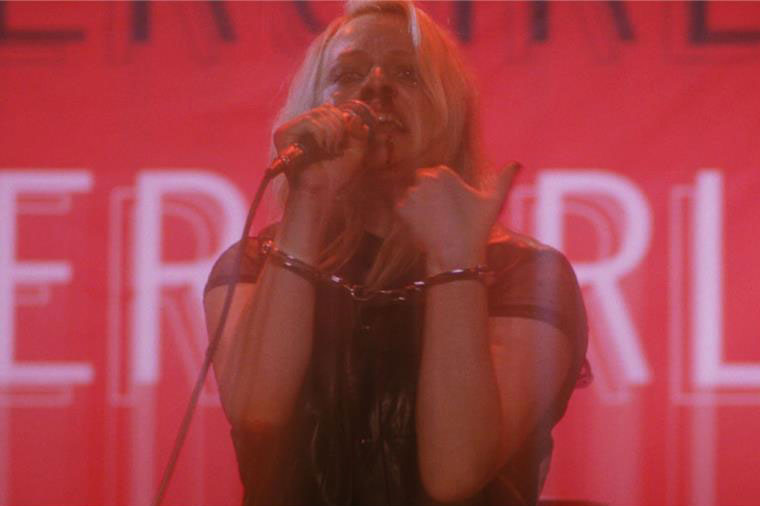 Elisabeth Moss gives an award-worthy performance as fictional rocker Becky Something, the Courtney Love-esque frontwoman of a late-’90s rock band, in the captivating “Her Smell.” Consider this the antidote to overstuffed and sanitized rock biopics: Sure, there’s a snifter of backstage excess, but the true problem for Becky is narcissism and apathy, combined with charisma — and the latter quality keeps people in her orbit in spite of her abuse. Writer/director Alex Ross Perry gives the film plenty of room to breathe; a mere five scenes (with a handful of interludes to break them up) stretch out for nearly half an hour apiece, each offering a fascinating, real-time slice of Becky’s mind and misdeeds. A strong supporting cast is lead by Agyness Deyn and Gayle Rankin as Becky’s long-suffering bandmates; a younger band that falls under the star’s influence, played by the underrated Cara Delevingne, Ashley Benson and Dylan Gelula, are fascinating in their own right. “Her Smell” is long — more than 135 minutes — and yet I didn’t want it to end. It’s a testament both to the character and Moss’s uppercut of a performance that I desperately wanted more of this story, even as it reached a fine conclusion.

“Her Smell” opens for a two-week engagement at the Harris Theater on Friday, May 3.

Dr. Ruth Westheimer, the nonagenarian sex therapist whose frank and caring guidance on sexuality and sexual health has been a television fixture for decades, is more than worthy of the documentary treatment on the basis of her remarkable career. Westheimer made her name thanks to a no-nonsense, down-to-Earth approach to topics that, at the beginning of her career, were somewhat taboo — especially on television. That attitude meant realistic, unpanicked talk about the AIDS crisis in the 1980s — long before the culture caught up to her — and decades of apolitical support for abortion access and women’s health care. Plenty of subject matter for a biography there, to be sure, but the remarkable revelations of the documentary “Ask Dr. Ruth” are what came before: Fleeing the holocaust and leaving her parents behind to grow up in a Switzerland orphanage, a brush with death while serving in the Israeli army and an uncertain emigration to America. The film, from director Ryan White (“The Keepers,” “The Case Against 8”), is perhaps a bit too long, but careful, thoughtful and remarkably detailed.

“Ask Dr. Ruth” opens for a one-week engagement at Row House Cinema on Friday, May 3. It is part of the theater’s “New Documentary Showcase” series.

Elizabeth Kloepfer, the on-and-off girlfriend of serial killer Ted Bundy, wrote an account of her proximity to the infamous criminal. (As did nearly everyone who ever encountered him, give or take.) Netflix, which has something of a Bundy cottage industry going, decided to adapt that book into a film. Trouble is, Kloepfer (Lily Collins) is obviously kind of secondary to the Bundy story, so the film can’t help but keep forgetting about her. “Extremely Wicked, Shockingly Evil and Vile” spends most of its time with Bundy (Zac Efron) himself, as he escapes prisons, charms the masses — including eventual wife Carole Ann Boone (Kaya Scodelario), who gets about as much screen time as the nominal protagonist — and denies his guilt. It’s a curious treatment of the story, but at least a well-acted one; John Malkovich and Jim Parsons stand out among the ensemble. It’s also thoroughly watchable and, for the growing number of true-crime devotees, certainly entertaining. It does seem more like an attempt to cash in on the resurgence of interest in Bundy than a film that demanded to be made, but it’ll do for a lazy afternoon stream.

“Extremely Wicked, Shockingly Evil and Vile” begins streaming on Netflix on Friday, May 3.