See why Saturday is a great time to share your love of pets underneath the city skyline. 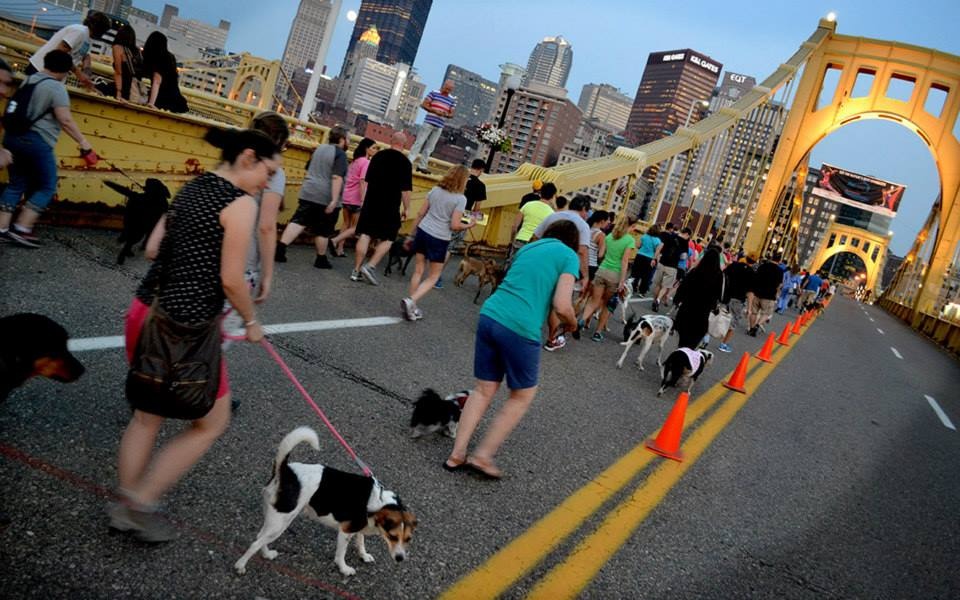 It’s claws to the concrete along the Roberto Clemente Bridge on Saturday. Bring your dogs along for the 6th annual Pup Crawl, a night filled with family-friendly festivities that will benefit homeless animals in Pittsburgh.

The city’s three largest humane societies — including the Western PA Humane Society, Animal Friends and Animal Rescue League — have partnered to make this event possible. All proceeds will benefit the three shelters.

The fun begins at 6:30 p.m. when Vendor Village and an array of food trucks open — so don’t forget to bring along a treat for your pup, too.

Registration begins at 7:45 p.m.. Pre-registration costs $25 per dog and registration on the day of the event costs $35 per dog. Humans get in free, but there is a one pup maximum per human.

At 9 p.m., the pups start their crawl along the Roberto Clemente Bridge.

“Bringing together the three largest shelters in the area to promote the importance of adoption really makes an impact on the attendees of the event,” said Hala Nuemah, managing director for the Western PA Humane Society. “Families and their furry loved ones get to also have fun in the shadow of Pittsburgh’s beautiful skyline.”

Among the pet-friendly fun at the pup crawl, there are also opportunities to adopt homeless animals in need.

Whether you’re spending an evening Downtown with your puppy or looking to adopt one, the Pup Crawl should be a doggone good time.

The 11th annual Silk Screen Film Festival kicks off at the Regent Square Theater Friday night. As always, the festival spotlights global cinema from an impressive swath of territory; as Silk Screen executive director Harish Saluja told Pittsburgh Magazine last year, “The only criteria we go by is good film.”

Highlights include: the Iraqi film “El Clasico,” to be screened on the festival’s opening night, about a transcontinental road trip; “Nawara,” a dramatic portrait of class and injustice in Egypt; and an encore presentation of “Foreign Letters,” a coming-of-age story that charmed audiences at 2013’s festival.

Tickets, including multi-film passes, are available here, along with descriptions of each film in the festival.

And while we’re talking about local film fests: Burgh Vivant host Brian Edward will skewer flicks from Hollywood’s golden age as part of a fundraiser for the Reel Q on Saturday at Bricolage. Get tickets and info for this evening of comedy here.