Pittsburgh’s first gay pride march was held in 1973, attracting a crowd of about 150. 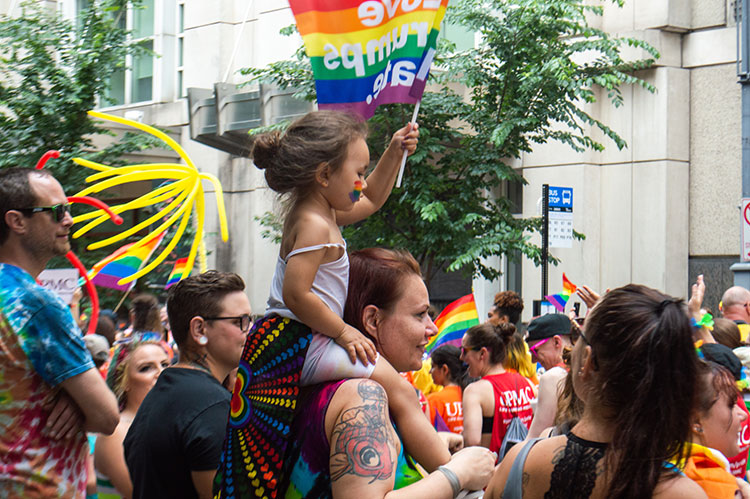 PHOTO BY JULIA MENOSKY | THE 2019 PITTSBURGH PRIDE PARADE WAS THE BIGGEST IN THE CITY’S HISTORY. IT MARKED 50 YEARS SINCE THE STONEWALL UPRISING IN NEW YORK CITY MARKED THE OFFICIAL START OF THE GAY LIBERATION MOVEMENT.

When you close your eyes and picture Pittsburgh in 1973, what comes to mind?

It may be the waning years of the city’s once-mighty steel industry, or the then-newly built Three Rivers Stadium. In that vein, maybe it’s a winning baseball team with the likes of Willie Stargell, something Pittsburghers today can only dream of, or Led Zeppelin’s historic concert that drew 40,000 fans to the stadium — and ended in a brawl.

But 1973 was an important year for the city’s LGBTQ+ community, too; it marked the first gay pride march in Pittsburgh history.

On Sunday, June 17, Pittsburgh “came out,” according to a news article from Gay News Pittsburgh, a periodical that ran from 1972 until September of 1976. Pride festivities ran from June 12-17. The “Gay Pride Week” featured, among other things, a gay cabaret, a gay dance, a symposium with speakers and workshop sessions, a lesbian/feminists night in Uptown and a march on the 17th, winding 3 miles from Downtown’s Market Square to Flagstaff Hill in Schenley Park. The march concluded with a picnic in North Park.

There was also a “queer street car” on Saturday that traveled from Market Square through Castle Shannon, Dormont and Beechview before returning Downtown.

For the city’s gay community, it marked the beginning of a new era; things were far from perfect — Pennsylvania would have sodomy laws on the books until 1980 — but for many, it was a start.

“And when we march on that Sunday in June the size of our crowd doesn’t matter. If 10 people march, it’s 10 more people than ever marched in this city proclaiming their gayness before . . . and each of those 10 marches for 100 more who can’t or won’t show,” wrote Fred Gormley in a column for the June 2, 1973 edition of Gay News.

Those in attendance would look back on the event and remember it fondly, but they also remembered the fear.

“I was scared at the first march. I don’t think we talked about the fear,” Randy Forrester, cofounder of Persad Center, told the Tribune Review in 2003. Many members of the crowd, he said, had been through anti-war marches and Civil Rights marches, and they had not always been welcome by the communities through which they trekked.

“We didn’t know what was going to happen,” he added. “Would there be sidewalk crowds that would get hostile?”

In the end, there was no hostility; the marchers were able to move freely along the route, with the biggest challenges reported being the heat and Pittsburgh’s hilly terrain. One of the marchers, according to old newspaper clippings, was carrying a pet boa constrictor on his shoulders; it died at some point along the 4-mile route. 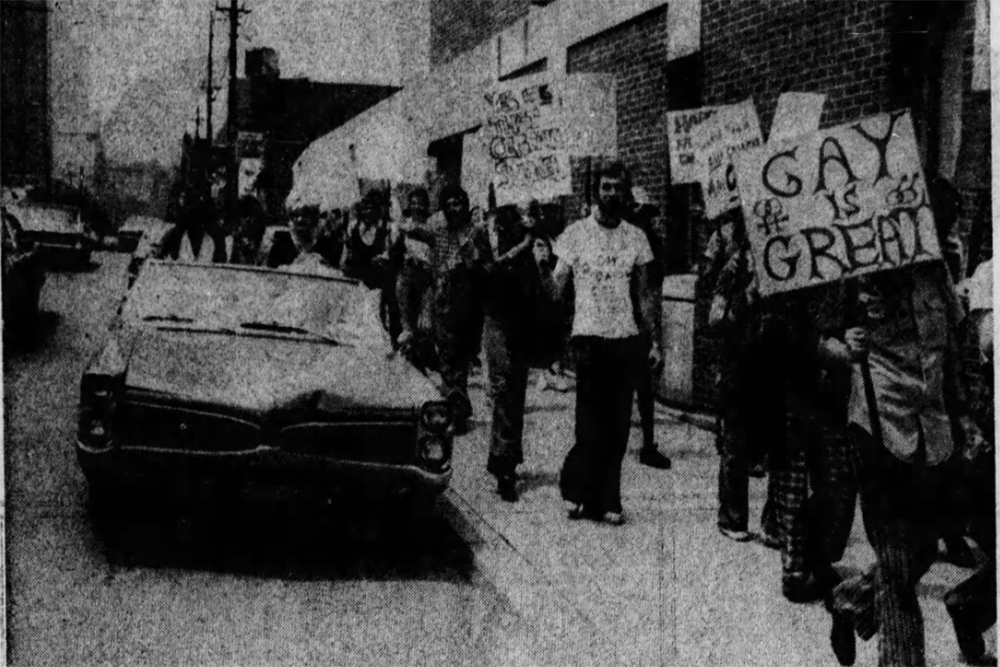 PHOTO VIA CLIO | A CLIP FROM A 1973 EDITION OF THE PITTSBURGH POST-GAZETTE SHOWS MARCHERS DURING THE CITY’S FIRST PRIDE DEMONSTRATION.

Held only four years after the Stonewall Uprising in New York City marked a watershed moment for the gay liberation movement nationwide, 1973’s march in Pittsburgh drew a crowd of about 150.

Fast forward to 2019, the 50th anniversary of Stonewall, and Pittsburgh’s march drew tens of thousands — the largest crowd in its history.

In the five decades between the two, the LGBTQ+ community saw many victories — the election of openly gay lawmakers, the U.S. legalization of same-sex marriage, the repeal of the military’s “Don’t Ask, Don’t Tell” policy and the implementation of various laws that make it illegal to fire someone for being gay. But LGBTQ+ folks and their allies are still marching, not only to celebrate the beauty of queerness and the many wins the community has seen over the years, but also to call attention to the many miles still left to go in the search for true equity.

Pittsburgh’s pride parades were put on pause throughout the 1980s. Amid a resurgence of conservatism and the burgeoning AIDS epidemic, the LGBTQ+ community was faced with an existential threat in the form of both disease — largely ignored by then-President Ronald Reagan in the early years — and legislation, which wouldn’t ban discrimination based on sexuality until 1990. (Even then, it was met with resistance from some Pittsburghers, who circulated an ultimately unsuccessful petition to reverse the ordinance.)

The march would return in 1991, with an estimated 500 in attendance traveling from the former Civic Arena to Point State Park. In 1992, that number doubled.

Pride in the 1990s was a grassroots-driven event that went bankrupt twice, but organizers managed to salvage it each time. The Pittsburgh Pirates held the first Pride Night in 2004 — an event that still continues today at PNC Park. As the years went on, Pittsburgh’s Pride March would become one of the largest LGBTQ+ pride events in the state, growing nearly every year.

Despite the parade’s success — especially as pride became chic and corporate sponsors stepped in following Delta’s acquisition of the event — trouble loomed in the form of the coronavirus pandemic. The pride parade was canceled in 2020 because of concerns surrounding COVID-19, and its future faced uncertainty once again in 2021 following the dissolution of the controversial Delta Foundation, which had put on the parade since the mid aughts.

Some in the LGBTQ+ community had accused Delta of excluding transgender and non-binary people of color and failing to represent other marginalized groups. Others had cited it for “rainbow capitalism,” or the performative inclusion of LGBTQ+ folks by corporations for the sake of profit, monetizing queerness without actually doing anything to benefit the community in the long term. Delta came under fire in 2015 for booking Iggy Azalea, a white rap artist who had posted racist and homophobic comments on social media, and for accepting a sponsorship from EQT, which allegedly had a record of donating to anti-LGBTQ politicians, in 2017. Delta was also criticized for charging fees to certain pride events, putting up what many regarded as an unnecessary barrier to access.

The parade in 2021 was taken over by the LGBTQ Coalition and Trans YOUniting, which, with help from various organizations across the region, put together an event with both in-person and virtual components to adapt to a world changed by COVID-19. Trans YOUniting is still involved in the production of this year’s event, along with Pittsburgh Pride Group, TransPride Pittsburgh and Proud Haven.

Beyond the city’s signature parade, other pride events had popped up in the years since its inception in 1973, distancing Pittsburgh Pride from the Delta Foundation well before the organization officially dissolved. 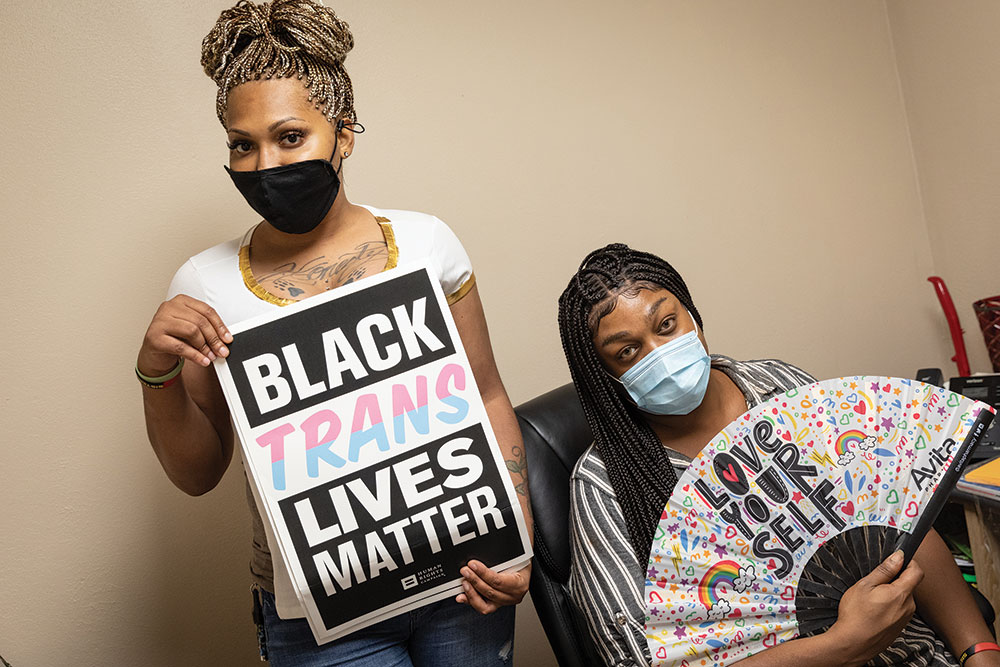 MARILYN (LEFT), A STAFF MEMBER OF SISTERS PGH, AND CIORA THOMAS, THE ORGANIZATION’S FOUNDER AND PRESIDENT, SHOW OFF TRANSGENDER PRIDE PROMOTIONAL MATERIALS IN 2020.

Pittsburgh Black Pride aims to provide educational, social, political and cultural resources to Black LGBTQ+ folks in southwestern Pennsylvania. It began in 1995 as a response to the lack of safe and affirming spaces in the greater Pittsburgh area for Black LGBTQ+ people; it’s one of the oldest Black Pride celebrations in the U.S. In its more than two decades, it has offered dance and musical concerts, health fairs, barbecues, parties and happy hours. This year, it’s scheduled for July 28-31.

People’s Pride, held since 2017 by SisTers PGH, aims to “hold Delta accountable for its historical exploitation and negligence toward our Black and Brown and trans people,” according to its website.

SisTers PGH has emerged as a leader in the city’s LGBTQ+ community, offering resources and programming along with a yearlong lineup of events to benefit queer communities and communities of color throughout the region. It also pays tribute to transgender people around the country who have been killed in acts of anti-trans violence.

People’s Pride will be held in Swissvale for the first time this year; in the past, the march has spanned through the North Side, Market Square and the Hill District.

For a list of happenings throughout the city to celebrate, commemorate and honor this year’s Pride Month, click here.