What looked like the end of an era was captured for posterity a bunch of times during and after the collapse against Cleveland. It might be a while before Mike Tomlin and the survivors find themselves smiling for the cameras again. 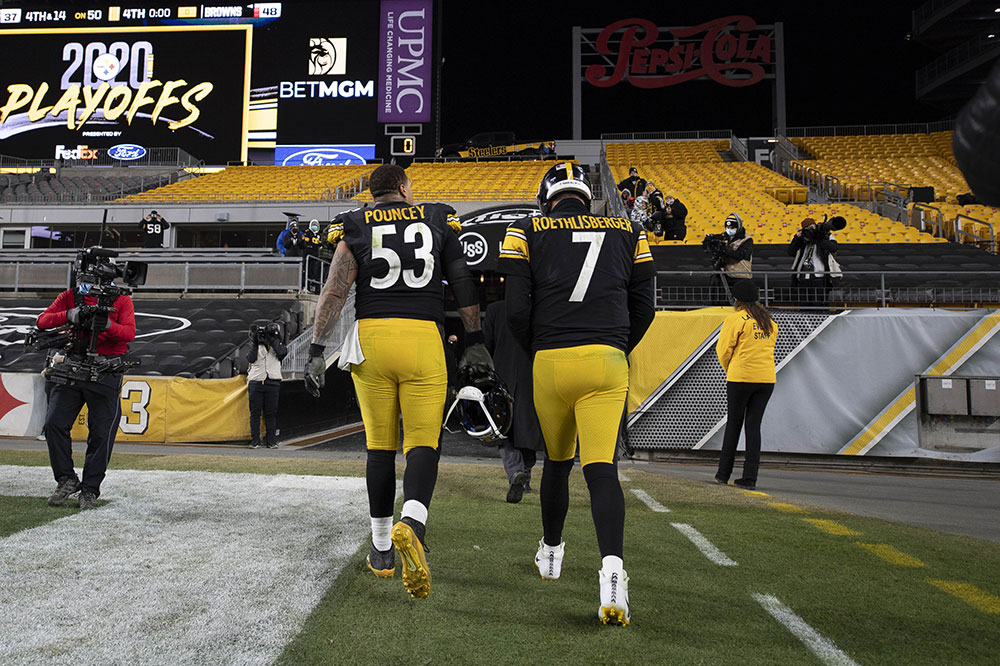 The picture was poignant enough to be unforgettable … if it weren’t destined to instead be lost among so many other images that, likewise, portrayed what the Steelers have become and where the Steelers are headed.

There was Ben Roethlisberger struggling to cover a distance of 15 yards and then seemingly refusing to recover an airmailed snap that had become a fumble on the game’s first play from scrimmage.

There was Roethlisberger flushing to his right and then throwing a pass that never should have been thrown on first-and-10 from midfield, and missing running back Benny Snell, (who wasn’t going anywhere, anyway) badly enough to be intercepted.

There was Terrell Edmunds grasping at air at the end of an attempted open-field tackle of Jarvis Landry.

There was another Roethlisberger pass, this one a little high and a little behind Diontae Johnson but still catchable, that Johnson managed to get two hands on but still not catch on the way to another interception.

There was Kareem Hunt turning a sweep that was slow in developing into a walk-in, 8-yard touchdown, in large part because Edmunds, Vince Williams, Steven Nelson and Alex Highsmith had all been completely and thoroughly blocked (Williams to the ground in this instance).

There was tight end Austin Hooper celebrating by himself in the end zone after catching a touchdown pass without the hindrance of coverage and Minkah Fitzpatrick in the vicinity, somewhat, with his palms up, the universal gesture for “What the hell just happened?”

There was plenty more where all of that came from on the way to the oblivion that was Browns 48, Steelers 37.

Every picture tells a story, don’t it? 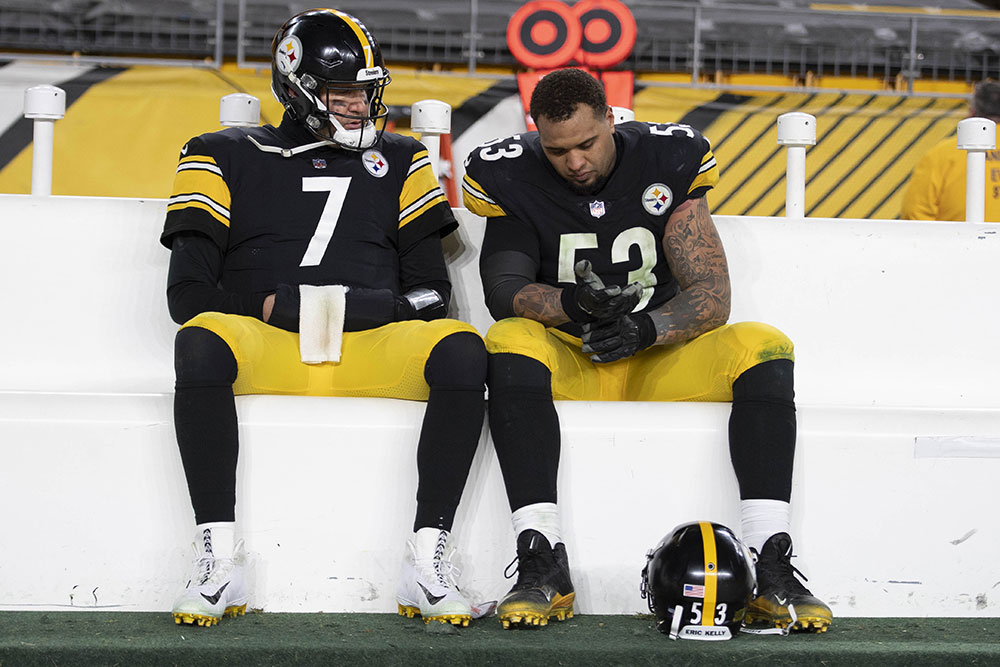 Roethlisberger and his center, Maurkice Pouncey, sitting together on the bench after the rest of the Steelers had retreated to the locker room in the immediate aftermath was just another but hardly the only snapshot of a meltdown that nobody saw coming.

How did things degenerate as rapidly and as devastatingly as they did, from 11-0 or even from 12-4 to Browns 28, Steelers 0 after 15 minutes?

The Steelers have the balance of the just-begun offseason to figure that out (they might need every available hour).

The distance traveled during the team’s individual and collective plummet, meanwhile, can be contextualized by one of those Twitter memes that are all the rage these days.

How It Started: Robert Spillane stuffing Derrick Henry in the hole at the goal line in October in Nashville.

How It’s Going: Spillane being carried into the end zone from 4 yards away by Hunt on Sunday night at Heinz Field.

That’s easily as appropriate a depiction of the Steelers’ plight as Roethlisberger and Pouncey sharing the agony of defeat.

The fallout from such a fall from grace has already begun. And with 19 unrestricted free agents to be dealt with and salary cap ramifications the Steelers might not be able to work around, it promises to be profound.

The first response by the Steelers included the revelation that three coaches would not have their contracts renewed, including offensive coordinator Randy Fichtner (a short time later it was announced tight ends coach James Daniel would be retiring).

What’s been difficult if not impossible to picture all along is Roethlisberger returning for one more season without Fichtner, his longtime coach and confidant, and tasked with having to learn a new offense and new terminology.

Are the Steelers not-so-subtly trying to tell Roethlisberger something?

It’s still hard to envision Roethlisberger standing at a podium at his retirement press conference, with photographers clicking away at a frenetic pace, his eyes watery and his voice as choked with emotion as it was when Showtime’s “Inside The NFL” microphones and cameras documented his exchange with Pouncey (“I’m sorry, brother … You’re the only reason I wanted to do this, man.”) for the masses.

Given the circumstances of COVID-19, even a seismic shift in the landscape might have to be relayed by Zoom or a tweeted press release.

But either way, life as the Steelers haven’t known it for 17 seasons and counting now is nonetheless coming into focus.