Popping the Question with Help from Man's Best Friend

Three Pittsburgh-area grooms find creative ways to have their furry friends at their side for one of the biggest moments of their lives.

Some grooms choose an intimate proposal with just their loved one, and others choose to pop the question in public or with an audience of family and friends. But here are three couples whose proposal wouldn’t be complete without their pets looking on. 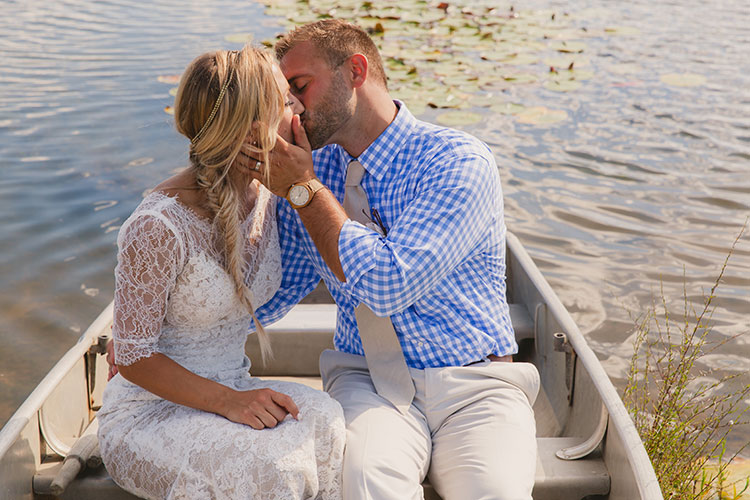 After meeting and beginning to date while students at the University of Pittsburgh, Alyssa Gaston and her boyfriend Adam Bania moved to New Jersey for work after college. One day, while driving to close on a house, they passed an animal shelter. Alyssa asked if they could go in and look at the animals for adoption, but she told Adam she didn’t plan on actually getting a dog at that point.

When she walked in, she saw a 6-month-old Pitbull/Rhodesian Ridgeback mix and learned that the dog had just been dropped off after being found tied to a bridge on the coldest night of the year. The dog jumped in Alyssa’s lap without hesitation.

As they walked out of the shelter, Adam looked at Alyssa and said, “So I guess we’re getting a dog.” 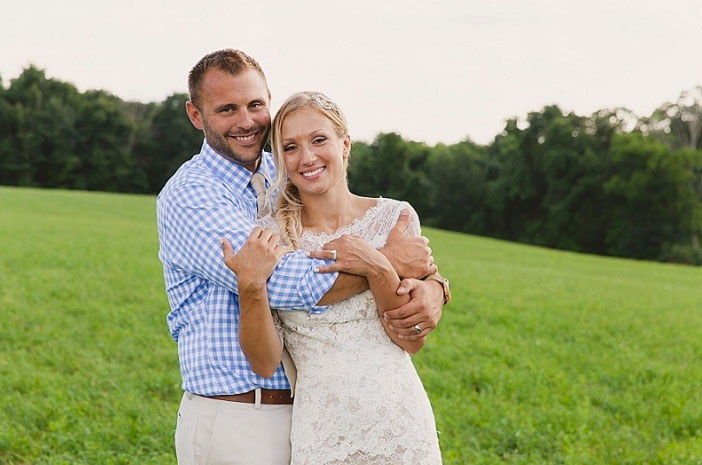 Since the couple met in Pittsburgh, as they accrued pets, they gave them ‘Burgh-related names. They named this beloved rescue “Yinzer.”

One morning in March 2014, Alyssa was soaked with sweat and rain as she walked into her house for a shower, having just returned from the gym.

As she walked in, she noticed that Yinzer was wearing a T-shirt, which didn’t seem right because she didn’t typically wear clothes. Adam suggested it was because of the rain, which still didn’t make sense to Alyssa. Then he encouraged her to read the shirt, which had the words: “Momz, will yinz marry Dadz”.

The proposal was absolutely perfect for Alyssa, who loves her dog. “She’s our first kid,” Alyssa says. 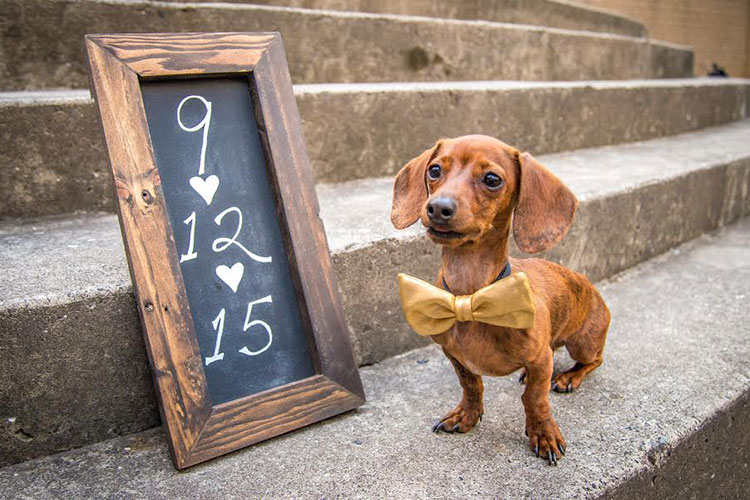 After moving out of her parents’ house, she didn’t have one of her own, but the obsession was clear — she owned everything from dachshund pillows to serving platters picturing the pup to a dachshund rolling pin.

Alex convinced her boyfriend, Daniel Torcasi, that they should get a dog, and what should it be but a mini dachshund? They decided to call him Bruce.

They found a dog online in Pittsburgh, which posed a potential problem since the couple worked in New York City and lived in Hoboken. They agreed to obtain the dog but they needed to find time to make the drive to pick him up.

One weekend, Alex left for a friend’s bachelorette party, and Daniel drove to get little Bruce — he was only three and a half pounds. 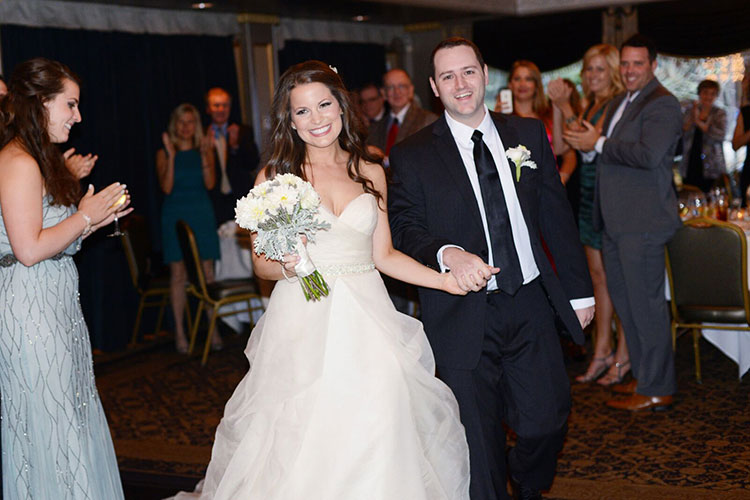 Alex, who describes herself as “a little dramatic,” says she freaked out when she saw her puppy, overwhelmed with excitement. Then Daniel told her to look at the nametag he got for the dog. When Alex picked up the pup to look for the name “Bruce,” she saw a ring instead.

Though there were signs — as her friend drove to her house to drop her off, Alex encouraged her to come in and meet her new puppy, yet her friend made “horrible excuses,” suggesting she couldn’t find parking — a proposal was the furthest thing from Alex’s mind.

“We had dated almost six years, and I was trying very hard not to be the person pressuring him,” Alex says. “I wasn’t going to try and guess when it was going to happen, so it was literally the last thing on my mind during this other big event in our lives.”

Alex loved that she was alone with Daniel in their home for the proposal. Though, of course, Bruce was there, too.

“It really was such a special moment, and then we had this cute little dog to play with,” she says.

Alex and Daniel married Sept. 12, 2015, at St. Bernard Church in Mt. Lebanon. Today, Bruce is 2-and-a-half and has his own Instagram account. 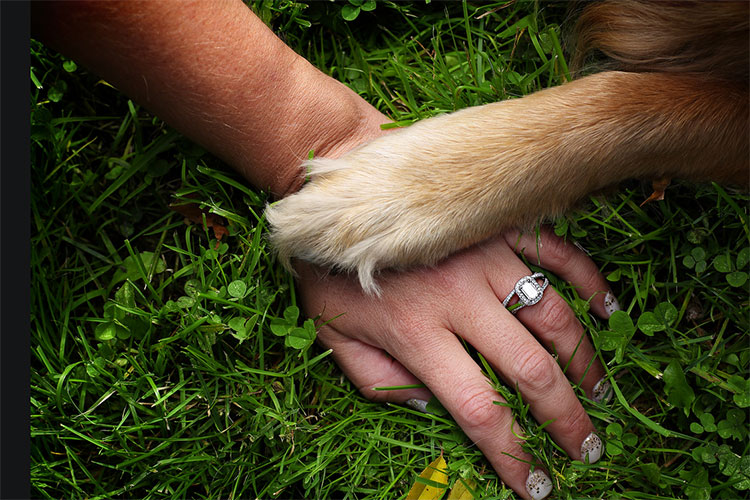 “Anything we could do with our dog so she could be there we did,” Amy says.

Bill had grown up going to Coopers Rock State Forest in West Virginia, and there’s a picture of Bill, Amy and Lucky at Coopers Rock from one of Amy’s first trips. The trio would return many times, and the couple took to calling the Shiba Inu/Collie mix “Lucky Phelps” one summer when Lucky took to jumping off their boat into the water, only to climb quickly back on board and go for another jump.

It was there, during one special trip, that Bill planned to get down on one knee. 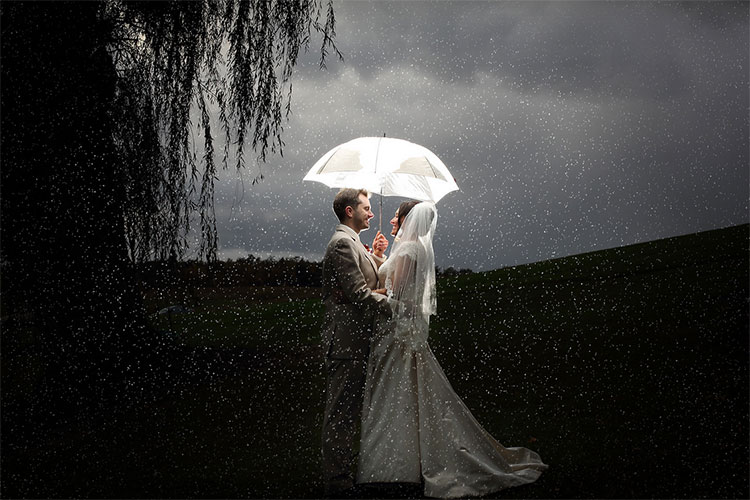 Lucky’s favorite weather was winter as she had a thick coat of fur perfect for bounding through the snow, so on one flurry winter day Amy and Bill decided to go to their cabin and hike. The snow cleared the spot of fellow travelers so Amy, Bill and, of course, Lucky, had a private moment as Bill proposed in the fresh white snow.

Though Amy decided Lucky wouldn’t enjoy attending their wedding Oct. 17, 2015 in Bramblewood at Simmons Hickory Farm — she grew afraid when there were too many noises — the pair, mom and pup, cherished a private photo shoot in Amy’s home with their wedding photographer beforehand.

Lucky typically knew to stay by Amy’s side on or off leash, but on the day of the photoshoot, she decided to take off for a run down the street. Amy had to chase after her, her veil flapping in the wind. The memory is all the more special given Bill and Amy had to put Lucky, age 12, down this past July because she had gotten cancer, but their fond memories of her persist.