A recent poll revealed that green bean casserole is the least-liked Thanksgiving dish for many Americans. So of course, PM Dining Critic Hal B. Klein set out to change minds with his recipe. 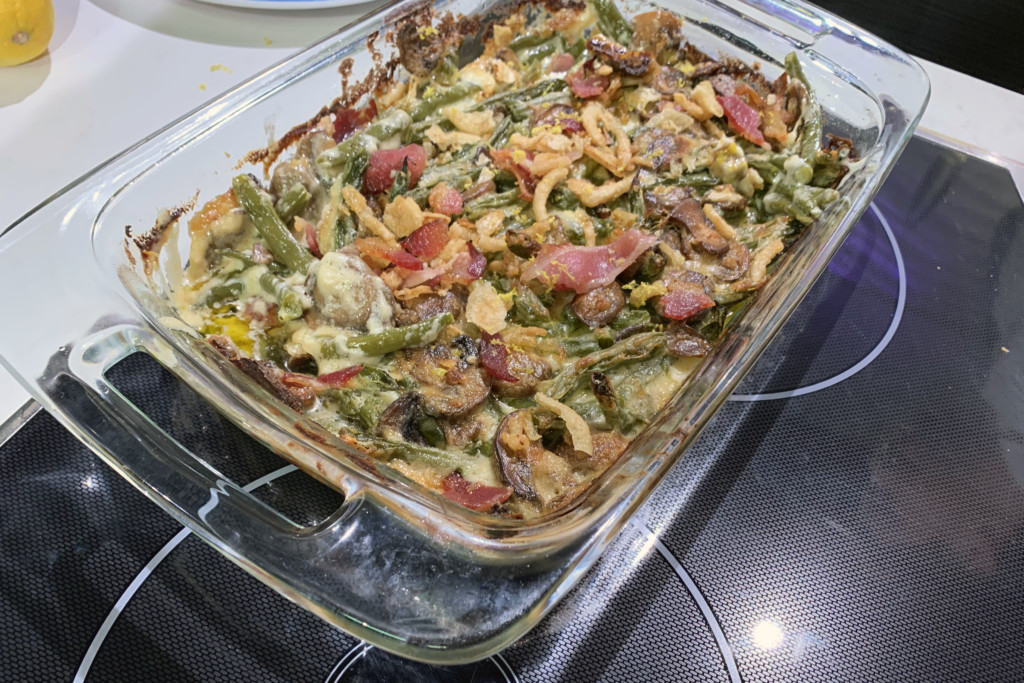 Preheat oven to 375F. Better yet, do this after you’ve pulled the turkey from the oven and it is resting (rest your turkey for at least 45 minutes).

Dice four slices of bacon and cook over medium heat until the pieces just begin to brown.

Set aside the bacon but keep the rendered fat in the pan.

Remove the stem end from approximately two pounds of fresh green beans, casting aside any beans that are overly diminished in quality.

Boil beans in salted water for three minutes. Shake off as much water as you can and beans to a mixing bowl (or, if making in advance, shock the beans in ice water, dry them and set aside).

Make a roux by melting two tablespoons of butter into a saucepan over medium-low heat. Add two tablespoons all-purpose flour and whisk.
Continue to whisk from time to time for about four minutes, until the roux just begins to turn golden and smell a little of toast. Gently stir in one cup of whole milk and three-quarters cup of heavy cream. Whisk occasionally over medium heat until the mix turns as thick as a milkshake, approximately four minutes.

Add a half cup of grated Parmesan cheese.

Taste for seasoning and add salt as needed.

Mix the green beans and the sauce.

Add the whole mix to a two-quart casserole dish.

Top with the reserved bacon and a cup of French’s crispy fried onions. Cook for three more minutes.

Remove from oven and add a sprinkling of fresh lemon zest.

Let rest for ten minutes prior to serving.