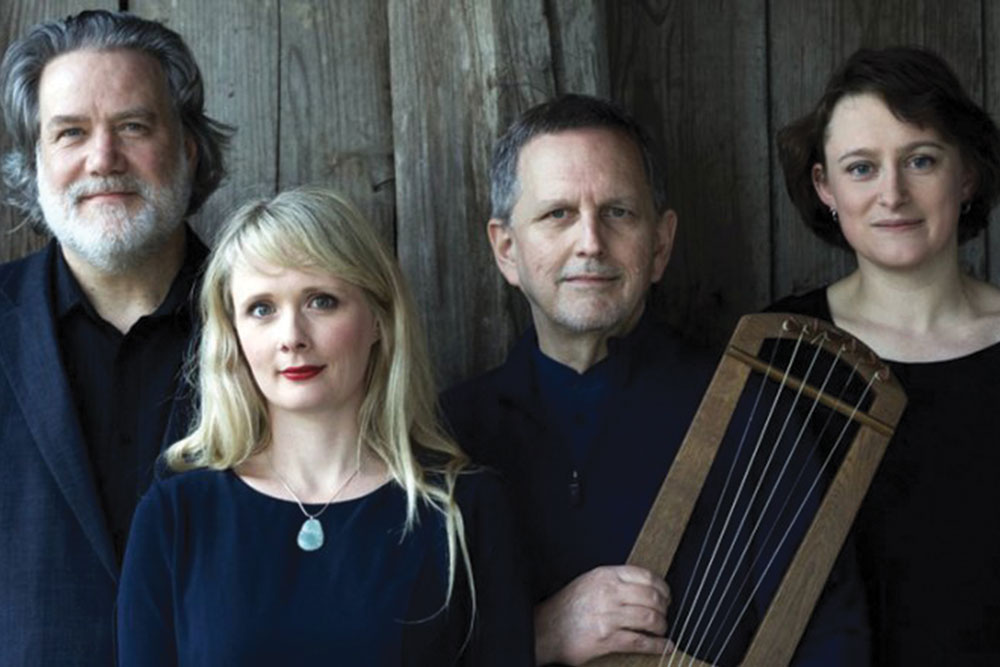 January! Harbinger of a new sense of possibility. This will be the year that all your resolutions will stick. OK, I can’t promise that, but if you choose a relatively easy one — to attend more concerts that expand your worldview and challenge your previously held convictions — here are some shows to start with.

Jan. 14 Sequentia
Chatham Baroque invites you to start 2020 with a performance described as “intense” (not exactly what you might think of when you think of baroque). Sequentia, a medieval music ensemble featuring harps and flutes made out of wood and bone, will present a night of songs pulled from Germanic and Anglo-Saxon texts. Expect songs of Pagan magic, ancient riddles and Beowulf.
Downtown: Pittsburgh Playhouse, 350 Forbes Ave. 412/687-1788, rbsp.org

Jan. 18 Ramy Essam
More interested in musical epics of the modern era? Ramy Essam has one of the most consequential musical careers in the contemporary music scene. He became famous during the Egyptian Revolution of 2011 when his music — inspired by the chants and voices of the demonstrators in Tahrir Square — became the anthem of the movement. Essam’s music is Egyptian rock accented by hip-hop and grunge; its social justice themes dovetail with his continued activism, even as he lives in exile.
Oakland: Carnegie Lecture Hall, 4400 Forbes Ave.; 412/361-1915, calliopehouse.org

Jan. 24-26 Fidelio
In 1803, Beethoven made a resolution to write an opera. And folks, he did it … a decade later. To be fair, the composer premiered two versions of the opera during that time, but it wasn’t until 1814 that the final revisions were made. Pittsburgh Symphony Orchestra will perform that final draft, “Fidelio,” this weekend, conducted by Manfred Honeck and joined by the Mendelssohn Choir of Pittsburgh. Experience for yourself the rewards of patience.
Downtown: Heinz Hall, 600 Penn Ave.; 412/392-4900, pittsburghsymphony.org

Jan. 27 Sound Series: Courtney Barnett with Hachiku
If your only resolution this year is to make no resolutions at all, and simply take it sleazy, perhaps Australian songstress Courtney Barnett is right up your alley. Barnett is known for her garage-y indie rock that conveys the feeling of an irreverent “welp” without being wilted or low-energy. Barnett is supported by dream-pop artist, Hachiku.
Oakland: Carnegie Music Hall, 4400 Forbes Ave.; 412/237-8300, warhol.org

— Here’s what else is happening in January.

You’ve popped bottles for the New Year, so continue the popping with some Pop-punk from veteran indie rockers Motion City Soundtrack at the Roxian Theatre (Jan. 4, roxianlive.com). Or pop over to Oakland to see chamber string quartet Brooklyn Rider take the stage at Carnegie Music Hall (Jan. 6, chambermusicpittsburgh.org).

Club Cafe packs its small venue with a diverse collection of shows this month, including Peter Asher: A Musical Memoir of the ’60s and Beyond (Jan. 9), bluesman Tas Cru & His Band of Tortured Souls (Jan. 16), and indie songstress Hannah Cohen (Jan. 19, clubcafelive.com).

Local renowned group Afro Yaqui Music Collective will bring its multilingual jazz to the SongSpace at First Unitarian in Shadyside on Jan. 11 (afroyaquimusiccollective.com). • Seeing a live performance of Ravel’s “Bolero!” is bonkers and fun, and the perfect January antidote. The PSO performs the work along with concertos from Liszt and Bartok (Jan. 17-19, pittsburghsymphony.org).

This article appears in the January 2020 issue of Pittsburgh Magazine.
Categories: Things To Do