Jamie and Ali McMutrie, for their inspiring bravery and selflessness while saving orphaned children of Haiti—both before and after the country’s devastating earthquake—are Pittsburgh magazine’s 2010 Pittsburghers of the Year.

One year ago, on Jan. 12, 2010, sisters Jamie and Ali McMutrie were having a typical afternoon in Haiti as they drove to the supermarket. The McMutries, originally from Ben Avon, Pa., were living in the capital city of the poorest nation in the Western Hemisphere, Port-au-Prince, for years, where they volunteered and dedicated their lives to caring for orphaned children. It was a life they loved, watching children flourish under their care and helping unite them with loving, adoptive families.

But at 4:53 p.m., their lives would undergo an unforgettable shaking. “Jamie was driving, and all of a sudden, the car started bouncing [from] side to side,” says Ali, 22. “I remember looking up at Jamie, then down at her—up, then down. And screaming.”

Jamie, 31, recalls the confusion. “At first we thought it was a bomb; I yelled, ‘They’re bombing us!’ And then I thought [there were riots]. We had no idea what an earthquake felt like.”

Ali could hardly see what was unfolding. “Because of the way the earth was rolling and buildings were just disappearing, it was hard to focus,” she remembers. “It was so strange.”

During the hours it took to get back home, they lived through horror: bloodied people stumbling against their car, screaming pleas for help and the sight of crushed, mangled bodies. Arriving at their orphanage, they found a partially collapsed house, but the dozens of children and several staff members weren’t hurt and were waiting for them in the driveway. Trying to quickly get a handle on the kids’ understanding of what they’d just been through, the pair asked, “What happened?” Two-year-old Adwildmita said, “The house was jumping.”

The 7.0 magnitude quake would leave 230,000 people dead and 1.6 million homeless. In October, it would be followed by a deadly cholera outbreak, and in November, by Hurricane Tomas, which would cause widespread flooding on the island.

The morning after the earthquake, Ali made her way to the U.S. Embassy. An official at the embassy assumed she came to arrange for the evacuation of her and Jamie alone—without the kids. “It was so silly,” Ali says. “I just laughed at him. It never occurred to us to leave without the kids.” That immovable promise (to not leave the children behind no matter what) is the hallmark of the sisters’ heroism.

The week after the quake was filled with fear, but life had to go forward. For the McMutries, it was day-to-day survival trying to find food and water, attempting to contact home, preparing each child’s paperwork for possible evacuation and playing with—and comforting—the kids.

“The kids were so well-behaved. They knew something was happening and that they had to be good,” Jamie says.

Ali remembers the closeness. “They all wanted to be held. We constantly had kids cuddling up with us, wanting to be close. I wanted that, too.” One of those cuddling up was 3-year-old Fredo, a boy with a bright smile who was already on his way to being their brother, thanks to Jamie and Ali’s parents, Sam and Diane McMutrie, who started the adoption process months earlier.

That week, the sisters spent nights alone inside the car in their driveway, calling home, planning and, finally, after being brave for the children all day, letting their emotions loose. Jamie and Ali each slept a total of three hours during the course of those seven days—something Ali says she didn’t think was physically possible—and their diet consisted almost exclusively of their grandmother’s Christmas cookies (the only food they had with them when the quake hit).

Jamie says the most terrifying moments of the week were the aftershocks. “It seemed like they just wouldn’t stop, and everyone was scared, even the 1-year-olds, because they were shaking.” To this day, loud thuds—even a child stomping on the floor—bring back that fear.

Another heart-stopping moment was during the rescue of the 54 children—the remarkable effort lead by former Gov. Ed Rendell, U.S. Rep. Jason Altmire and Leslie McCombs, of UPMC.

As the plane sat on the runway just before beginning to taxi, Jamie had the horrible realization during a final head count that Emma, whose third birthday was the day of the quake, was not on the plane. Jamie bolted off just before the stairs were raised.

“Some military guys actually picked me up and put me back on the plane, and I pretended to give up,” Jamie says. “Then, as the stairs were coming up, and the door was closing, I jumped out.” Jamie found Emma safely asleep on a chair in the embassy and arrived in Pittsburgh one day later than Ali and the other kids.

Ali and the children got to Pittsburgh on Jan. 19, Ali’s 22nd birthday. Home for the children became Children’s Hospital of Pittsburgh of UPMC, where the Rangos Conference Center was converted to an area for sleep and play—complete with sleeping bags and a large screen for showing “Sesame Street” and Disney movies. Local volunteers from the American Red Cross and Catholic Charities accompanied each child, and outside the room were changing stations and stacks of donations from Giant Eagle, Target, Wal-Mart and other stores. Throughout the day, adoptive parents who flew in from around the country bonded with their children. At press time, 42 have been adopted, and 12 have been matched with new families. Pittsburghers have fallen in love with Jamie and Ali, and the sisters say that the region’s reaction after the quake deeply moved them. “We are so proud to be from Pittsburgh,” says Ali. “We love our city, and we’re incredibly grateful for the support we’ve gotten.” 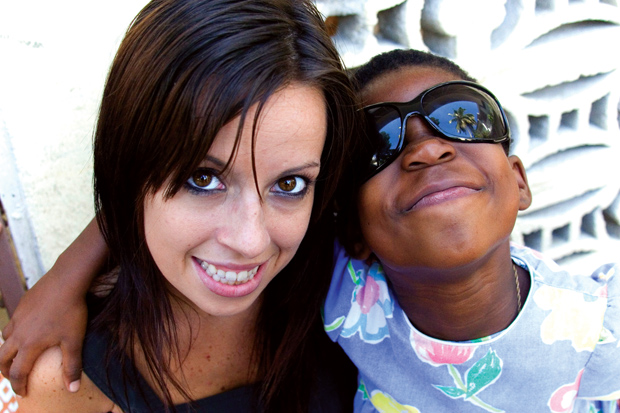 Jamie poses with one of the many orphans who wish to be close to her—and her sister—on a daily basis.


Jamie and Ali also caught the media’s attention. Hailed as national heroes, they appeared on “The Ellen DeGeneres Show” and did a photo shoot with Katie Couric for Glamour magazine.

Throughout the crisis, Jamie’s husband, Douglas Heckman, got word to Virginia Montanez (PittGirl), who reported on the crisis on her blog and tweeted updates. Montanez’s tweets were re-tweeted, and the story went viral, thanks mostly to celebrities who spread the word.

Soon, people from all over the world were reading the blog, and donations—from water to clothing to airplanes—began pouring in. Most importantly, the social-media effort caught the eye of CNN, which sent a camera crew to visit Jamie, Ali and the children, showing the world their plight.

“Through my personal interactions with Jamie and Ali since that hellish week in January, I’ve had the chance to listen to them tell their story of survival and their continuing story of helping other Haitians live better lives,” Montanez says. “I’ve seen in their eyes the impossible-to-mask, genuine selflessness and a deep love for the children and families of Haiti.”

Congressman Altmire enthusiastically agrees with the choice of Jamie and Ali for Pittsburghers of the Year. “I can think of no better choice than the McMutrie sisters,” he says. “… They represent all that is good about the people of our region.”

Gov. Rendell calls his participation in the rescue one of the most memorable events of his life and admits he still gets teary-eyed when recounting the story of the McMutries and their bravery. “I had never seen anything like it. Jamie and Ali dug their heels in and said, ‘We all go, or nobody goes.’ It was their commitment to all of those kids, their grit, their unwillingness to compromise that saved all of them,” Rendell says. “… Jamie and Ali are a symbol of all that’s right, not just with America but with the human race.”

Perhaps the group most grateful to the selfless devotion and love that Jamie and Ali gave to the children are the many parents who adopted the orphans.

“Words couldn’t express our deep gratitude to Jamie and Ali for what they did for our daughter and the other children,” says Damien McCann, of L.A., who adopted Samantha with his wife, Lorraine.

“In the worst possible circumstances and under incredible pressure, they performed brilliantly,” he continues. “… For Jamie and Ali it was, and still is, all about the kids.”

Another adoptive parent, Jean Griffith from Wichita, Kan., says, “The days after the earthquake, when there were no tents, little food, less water and panic all over Port-au-Prince, were the most terrifying of our lives, and the only solace we took was in knowing that our son, Alex, was with Jamie and Ali. Still, the odds were against them and the children. So, when I first held my son in my arms again in Pittsburgh, I knew I was holding a miracle. How do you thank the people who have given you a miracle?”

Weeks after the earthquake, Jamie and Ali established Haitian Orphan Rescue, a nonprofit organization, to fund their work in helping Haitian families stay together whenever possible, diminishing the need for parents to relinquish their children by personally providing food and supplies, teaching skills like farming or providing seeds, and providing education about women’s health issues.

It pains Jamie and Ali to watch parents give up their children because of poverty, and they are working family by family, village by village, to help alleviate the need. Their dream, though they say they know they won’t see it in their lifetimes, is for adoptions in Haiti to be necessary only for “true orphans,” those without any family at all.

Haitian Orphan Rescue, along with its partner organization, The Road to Hope (based in Colorado), helps Jamie and Ali with these efforts and care for families they’ve been helping since they moved back to Haiti last August. Also, they have leased a home, and, as of press time, have seven orphans living with them, most of whom are under the age of 2.

The sisters’ goal is to establish their own complex, one that would include not only an orphanage, but also a farm, school and clinic to serve both their needs and the community’s. This would be an expensive undertaking, and they admit it’s far-reaching. But like Pittsburgh itself—the hometown they have inspired and so beautifully represented to the world during the past year—Jamie and Ali have proved their mettle, tenacity and resourcefulness, their ability to overcome setbacks and to rise anew—stronger than before.

For their selfless dedication to the neediest of children and families, their bravery and resourcefulness in the face of post-earthquake hell, for their commitment to the future of Haiti and its children and for the pride they brought to us all in the way they represented Pittsburgh to the world, Jamie and Ali are Pittsburgh magazine’s 2010 Pittsburghers of the Year.

For more information on how you can help, log on to the McMutries' nonprofit, Haitian Orphan Rescue, at haitianorphanrescue.org, or visit The Road to Hope, a nonprofit dedicated to helping the children of Haiti, at theroadtohope.org.

Jonathan Wander is a contributing writer for Pittsburgh magazine who covers a variety of subjects including technology, collectibles and architecture. He first wrote about Jamie and Ali in Pittsburgh magazine’s January 2009 issue in the story  “Love and Haiti.”

This article appears in the January 2011 issue of Pittsburgh Magazine.
Categories: Arts & Entertainment