At the time of its opening in 1971, the 64-story U.S. Steel Tower was the tallest building in the United States between New York and Chicago. 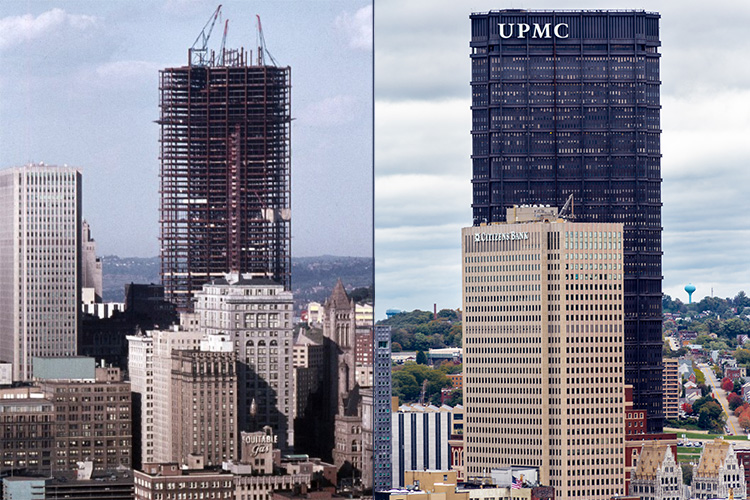 Pittsburgh’s tallest building has had several names in its nearly 50-year history. The 841-foot tall building, located at 600 Grant Street and designed by Harrison, Abramovitz & Abbe, was first called The United States Steel Building when it opened in September of 1971. The tower changed its name to USX Tower in 1988 until early 2002 when its name changed again to U.S. Steel Tower. Today, the skycraper’s two main tenants are U.S. Steel and UPMC.

It was constructed with U.S. Steel’s specially made CORTEN Weathering Steel, a product that gives the skyscraper its rusty brown color. The building has eighteen structural columns filled with a half a million gallons of water and antifreeze. In the event of a fire, the liquid solution would dissipate its heat by convection allowing the columns to resist flames for four hours.

The building is shaped like a triangle to reflect the shape of Downtown’s Golden Triangle. The Top of the Triangle restaurant occupied the 62nd floor for 30 years before closing in 2001. A Pittsburgh landmark, the building appears in several Hollywood movies including “Dogma,” “Sudden Death,” “Striking Distance,” “Jack Reacher” and “The Dark Knight Rises.”