Franco Harris’ No. 32 jersey should have been retired years ago. But it’ll have been worth the wait if the occasion serves as a reminder that the 1970s should never go out of style. 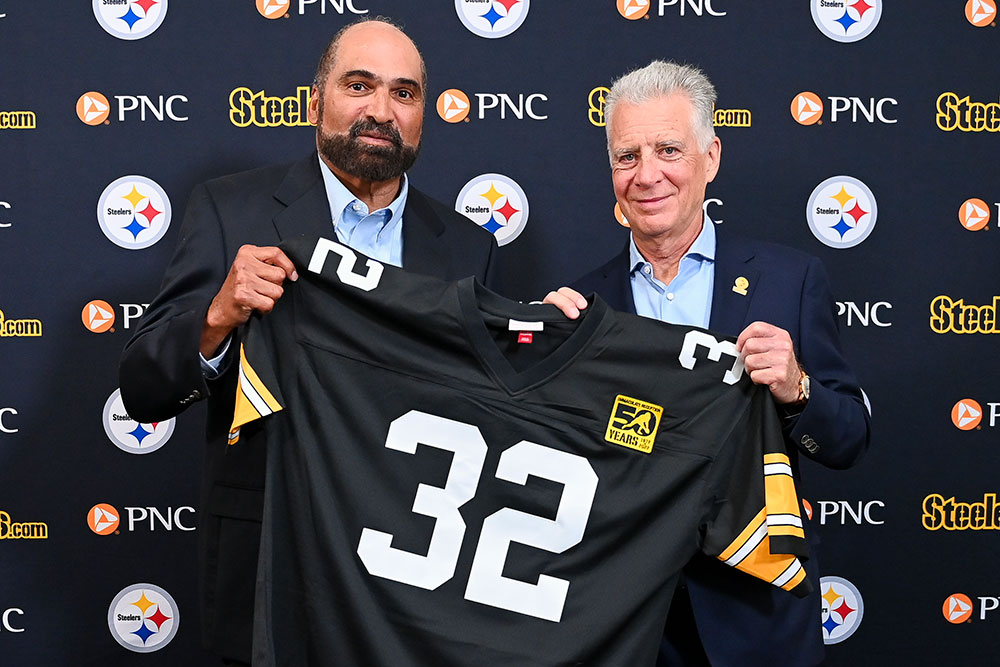 Editor’s Note: Franco Harris died Wednesday, Dec. 21 at the age of 72. On Sept. 8, 2022, PM Sports columnist reported on the Steelers’ plans to honor Harris by retiring his No. 32 jersey.

His words were measured, as words sometimes become for 72-year-olds, and the microphone could only do so much to amplify them.

But Franco Harris was still larger than life.

He was that and more on the South Side this week when the Steelers announced they finally intended to get around to retiring his No. 32 jersey.

Nobody has worn that number since Harris played the last season of his incomparable tenure with the organization in 1983. But the ceremony the Steelers plan to stage at halftime when they host the Raiders on Dec. 24 will make it official once and for all.

Only Ernie Stautner (No. 70) and Joe Greene (No. 75) have been previously recognized in such a fashion by the Steelers.

And it’ll be a while until it happens again (Terry Bradshaw’s No. 12 should be next when the Steelers eventually decide it’s time, but that’s another story for another time).

They have their Hall of Honor.

And there’s a museum in Canton, Ohio that’s doing a pretty good job of recognizing Steelers’ history and its place in the game.

But retiring numbers is something the Steelers, for whatever reason, do grudgingly.

None of that was lost on the author of the Immaculate Reception, the 50th anniversary of which (Dec. 23, 1972) coincides nicely with the Steelers’ decision to at long last bestow sartorial immortality on Harris.

“This is so big it’s hard to grasp, this moment and what we had during the 1970s,” he insisted.

“Still, when I think about it today, it just seems like a dream.

“You just shake your head and say ‘wow.’”

The humility Harris expressed right about then was as genuine as the career that earned him the highest honor the Steelers can bestow was legendary.

It was also apparent as Harris continually steered mentions of his individual greatness into references to the 1970s, about how special a time that had been and about how so many had contributed.

Of course he mentioned Chuck Noll and Greene, among other players and coaches, but Harris also made sure he included the trainer (Ralph Berlin), the equipment managers (Tony Parisi and Rodgers Freyvogel) and even the PR guy (Joe Gordon).

The fans and their unique expressions of admiration for the 1970s Steelers (“Franco’s Italian Army” and “Dobre Shunka,” in honor of Jack Ham, were two Harris remembered), likewise, weren’t forgotten.

There was a time when the Steelers and their legions of rabid fans were accused of being stuck in the 1970s.

And there was a time such accusations were justified.

A joke illustrating as much used to maintain it took four Steelers fans to change a lightbulb (one to actually change the bulb and three to talk about how great the 1970s were).

It was, after all, a long time ago.

But ever since the 2005 Super Bowl and the one that followed in 2008, such remembrances seem to be much more about celebrating a storied past than taking up residence there.

You can do the former without succumbing to the latter.

And the former should be done.

The 1970s, personified by the larger-than-life presence of Harris and Greene, among others, remain worth celebrating.

And they will be 50 years from now, regardless of whether or not the collection of Lombardi Trophies grows.

Commemorating Harris, as the Steelers did Wednesday and will again in December, is a fitting and timely reminder.

“No one saw the Steelers of the 1970s coming,” Harris maintained. “Nobody saw that.

“It probably was beyond all expectations and all dreams.”

For the guy whose jersey they plan to retire, in particular.