Pittsburgh Portraits Adorn the Riverwalk Beneath the Fort Duquesne Bridge

The project, called “Black Flowers,” aims to celebrate the beauty and royalty of Black faces. 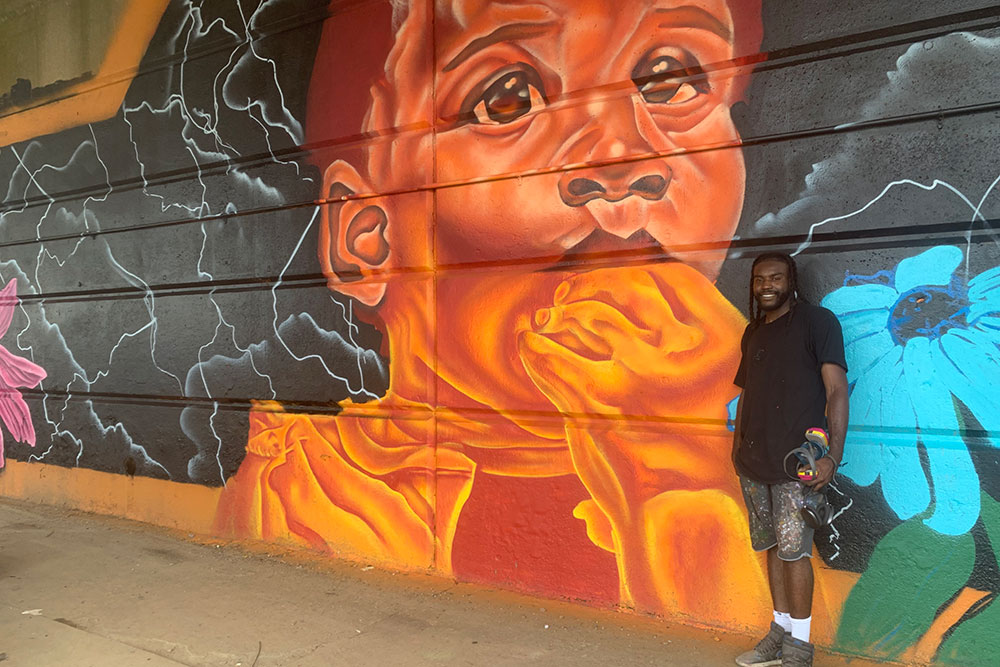 An artist, a wall and 215 cans of spray paint: It’s a recipe for something big.

And big is exactly what Camerin “Camo” Nesbit has in mind.

Beneath the Fort Duquesne Bridge, his sprawling mural is alive with a rainbow of familiar faces, and even though it’s still a few days away from completion, it’s striking enough to catch the attention of passersby along the Riverwalk.

“These are 12 underrepresented Black faces of Pittsburgh,” says Nesbit, a Pittsburgh native from Homewood. “Of course, there’s hundreds of faces that also could be on the wall. I just felt it was a good start.”

The goal, he says, is to craft a space that’s both safe and celebratory.

“I’m just trying to create an environment that’s beautiful for everyone, but safe for Black bodies and Black individuals of all statures to come down and feel comfortable to be inspired, be uplifted, be encouraged,” he says.

Nesbit is a resident artist for Riverlife, a nonprofit that organizes activities and events that celebrate the city’s riverfronts. With the striking detail of his work, one could assume Nesbit’s art has been a lifetime in the making, but in reality, he’s only been painting for about six or seven years.

“I started with sneakers. As a kid, I really wasn’t too into art. Everybody drew Dragon Ball Z and Pokemon and stuff. I was kind of into that wave,” he says. “But I took it seriously after college, and it has grown me to an individual that I’ve really come to love.”

The location of Nesbit’s mural is across the Allegheny River from PNC Park, overlooking a walkway frequented by Pittsburghers out for a stroll, bike ride or boat trip. But it wasn’t only picked for its opportune location; it’s a wall with a storied history stemming from the protests that followed the murder of George Floyd in Minneapolis in May 2020.

In June 2020, amid a national wave of protests against police brutality, a group of guerrilla artists painted the words, “Black Lives Matter” on the wall, covering up a 2015 mural called “Adjutant,” which depicted various forms of plant life in silhouettes. But controversy erupted over the BLM mural because no Black artists were involved;  Black voices were left out. Nesbit was critical of the mural last summer, and he promptly recruited and paid 25 Black artists to revamp it. The Black Lives Matter mural was repeatedly vandalized as it was being redesigned. He chose the portraits because he does not think they will be vandalized.

“We’re just trying to figure out a way to stop [vandalism] and keep it fresh here, and keep the message solid and not political or slighted or any bias toward negativity,” he says. “Portrait work is a very respected art form, and I just felt that would give a space where it allotted no vandalism and allotted a space that had care put into it.”

While Nesbit has been a resident artist on the site for almost a year, the portrait painting began about three weeks ago, and Nesbit, who says he works fast (and had the help of a few assistants who have since gone back to school), is planning on wrapping it up by the weekend. And even though the mural hasn’t been exceptionally long in the making, it’s a project with a deep significance in which Nesbit takes great pride.

Even the project’s title is imbued with deep meaning.

“The project’s called Black Flowers,” Nesbit says. “People may not get their flowers for God knows how long … I’m just trying to give them their flowers now.”