A regal, curious bird at the national aviary is one of the north side's longest-tenured residents. 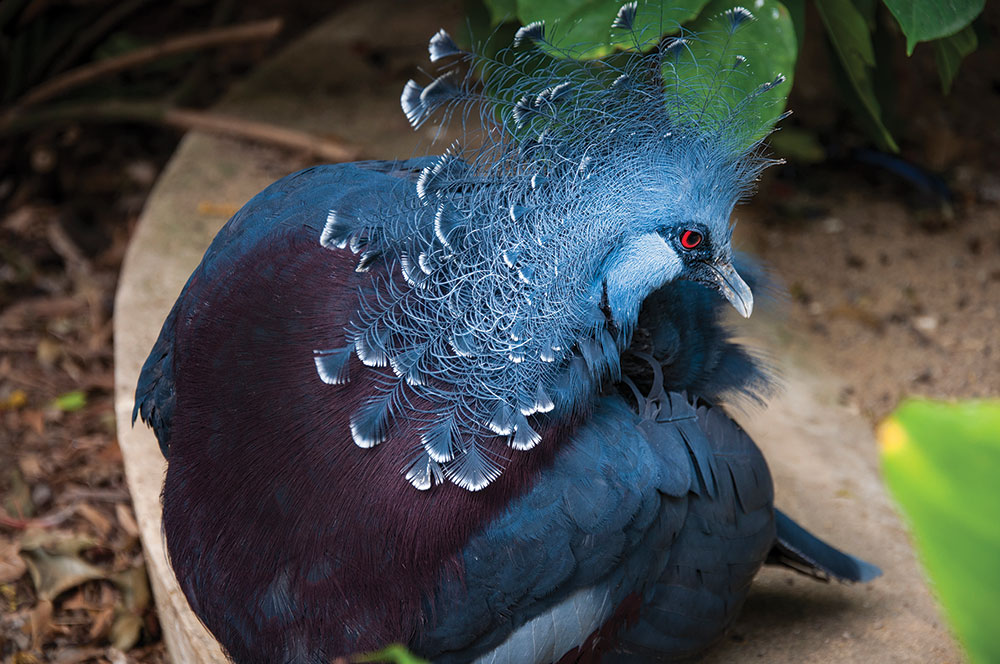 This is a bird with things on its mind.

As you enter the National Aviary’s impressive Tropical Rainforest habitat, a Victoria crowned pigeon will likely serve as your greeter. The room is home to four of the large birds, and they often hang out on the deck, eyeing up visitors.

They’re comfortable around people — and inquisitive. One will take a few pigeon-dance steps toward you, cocking its head to the side. It’s sizing you up. It is considering you.

The Victoria crowned pigeon, a New Guinea native distantly (but identifably) related to the common variety, also has a bit of wanderlust. While it’s a very content bird, it is curious; as such, the crowned pigeons at the National Aviary will often make a break for the neighboring Canary’s Call habitat if a door is left open. An errant pigeon is not there to cause trouble; it will glance around, evaluate things and return home.

This is such a frequent occurrence that the Aviary is making a show of it. In the “Royal Stroll,” the Victoria crowned pigeons will be permitted to process — regally and legally — through the neighboring room.

You’ll suspect that the large bird — nearly the size of a Canada goose — weighs more than its 4.4 pounds. Many guests mistake them for members of the peacock family due to the ostentatious feathers of their crowns, according to Teri Grendzinski, the National Aviary’s supervisor of animal collections, as well as their size. Visitors are not used to seeing a pigeon of quite this scale — perhaps because the biggest pigeon isn’t around anymore. 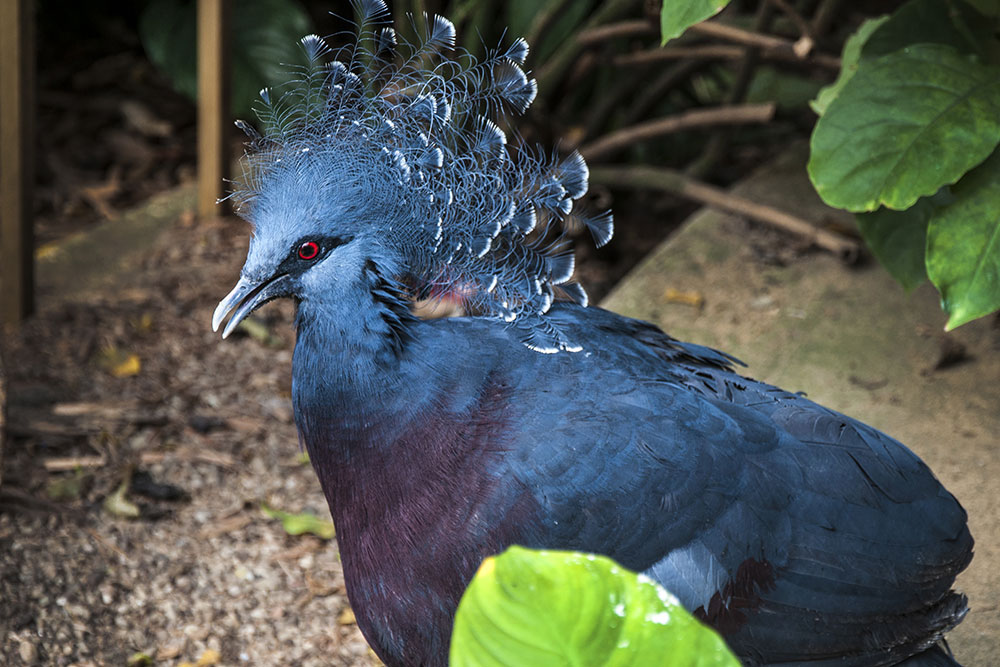 “There was, historically, one pigeon bigger — and those were dodos,” Grendzinski says. The extinct bird is a distant relative of the Victoria crowned pigeon; the closest relative of the dodo, the Nicobar pigeon, can also be found in the Tropical Rainforest exhibit. While the latter bird — an impressive, frilly fellow himself — is a closer relative, “Victoria crowned pigeons are as close as you’re going to get, size-wise,” Grendzinski adds.

Their relation to perhaps the most famous extinct bird is the Victoria crowned pigeons’ global claim to fame; locally, the birds occupy a notable role in Aviary history. When the earliest incarnation of the current Aviary opened in 1952, the current Tropical Rainforest habitat was the entire complex. From day one, a crowned pigeon was part of the exhibition.

In one room on the North Side, then, generations of this rare bird have occupied the same space for more than a half-century.

The pigeon that greets you will likely lose interest, heading off to find something to eat. (“Blueberries are one of their favorites,” Grendzinski says.) As you watch it depart, however, you’ll see how similar its gait is to the birds that coat Downtown streets. Many of us have negative thoughts on the fearless American pigeon, for a variety of reasons; meeting their royal cousins, however, may well change your mind.

Even if your estimation of those workaday pigeons does raise, however, they will still pale in comparison to the beauty of the Victoria crowned pigeon, which cannot be overstated. Fortunately, you can easily encounter the long-tenured birds at their North Side home; one will probably step curiously toward you, allowing an up-close encounter.

For a moment, anyway. Then it will move on. It has things to do.

This article appears in the January 2020 issue of Pittsburgh Magazine.
Categories: Things To Do