The Primanti Bros. sandwich is going nationwide. Do we want to share? 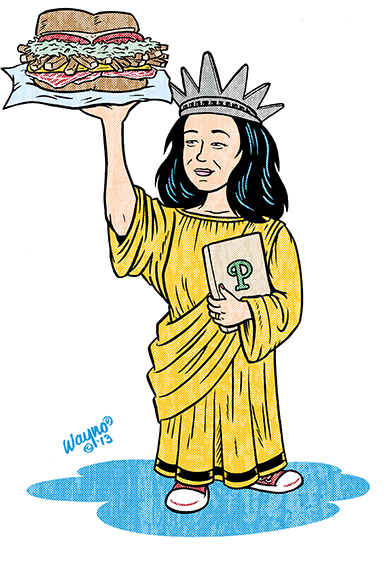 That noise you heard in the middle of winter wasn’t the din of the mayoral vote being split into three as Michael Lamb joined the race. No, that was the sound of numerous Pittsburghers collectively gasping as they learned Primanti Bros. had acquired an investor that would take the sandwich seller nationwide.

There are few things as ’Burghy as a Primanti’s sandwich. In fact, there are two things you can safely bet on seeing during any nationally televised home Steelers game: (1) an aerial view of the Point and (2) an action shot of a Primanti Bros. sandwich being expertly assembled.

To many in the world, that’s what Pittsburgh is — football, steel, rivers, Primanti’s.

That the sandwich many consider to be as much a part of our identity as the Terrible Towel will soon be available all over the country isn’t sitting well with some ’Burghers.

“A chain restaurant? The beginning of the end for Primanti’s,” said one local.

Before we make up our minds about this development, it would be wise to examine it more closely. So let’s set aside our angry Yinzer attitude as we go point/counterpoint on the subject.

POINT
“You can’t get Mancini’s in Iowa,” one reader commented on Facebook. And that’s just the start for many, as they worried that the bread will change, the quality will suffer — and, before long, it won’t be true to the original recipe, causing a once-unique Pittsburgh flavor to become a diluted copy.

COUNTERPOINT
As reader Daniel Casciato wrote, “How difficult is it to mess up two slices of Italian bread, coleslaw, fries and a slab of meat?” He’s right. Coq au vin this is not.

POINT
As VH1’s Jim Shearer (a Pittsburgh native) asked, “Who and what will go on the wall in Philadelphia?” An Eagle? A [gag] Flyer? And what about Boston — Tom Brady?! Let’s not forget that the Bible has prohibitions against Tom Brady’s face appearing on the wall inside of a Pittsburgh-famous sandwich shop. It’s right after the scripture that says, “Thou shalt not ask for a Pitts-Burgher with ‘fries on the side.’”

COUNTERPOINT
There is no counterpoint. Under no circumstances shall the likeness of any current or former Flyer, Cowboy, Eagle, Patriot, Raven or Bengal be displayed on a wall inside of a Primanti Bros. shop. Can we get President Obama to sign an executive order saying as much?

POINT
We’re no longer going to be in the dark about how many fat grams, carbs, calories and cholesterol units are in each menu item. It’s easier to order a Kielbasa Egg and Cheese when you can fool yourself into believing you’re not consuming a two-month supply of Weight Watchers Points in one sitting. A national chain will need to publish the nutritional facts, and you and I are going to be faced with the artery-hardening truth.

COUNTERPOINT
Again, there is no counterpoint. No good can come from knowing. Either we take the “La-la-la-la, I can’t hear you!” route, or we start running ultra-marathons in the thousand-degree Australian outback to work off caloric content in the quadruple digits. I’m pretty sure you can guess which route I’ll be taking. *plops down on the couch*

POINT
Now you’ll be able to get a Primanti’s anywhere. Ugh.

COUNTERPOINT
Now you’ll be able to get a Primanti’s anywhere! Ex-pats, rejoice!

POINT
The original Pittsburgh locations are going to lose their notability.

COUNTERPOINT
I disagree. Sure, they might not remain the tourist magnets they are today, but they will be as special as we make them. Primanti’s will still be the place where we made memories — and where we’ll choose to make new ones. No pristinely clean, salad-offering, franchised Primanti’s in Phoenix with a wall painted full of Arizona Cardinals is ever going to change that.

… one nation, under God, with french fries and coleslaw for all.

This article appears in the March 2013 issue of Pittsburgh Magazine.
Categories: From the Magazine, Hot Reads, PittGirl