PittGirl: Yikes! Imagine This Instead of a Fountain at the Point

City leaders considered many options for Pittsburgh's confluence including something that looked like it was designed by the Jetsons, or an absolutely bonkers, batpoop insane idea by the one and only Frank Lloyd Wright. 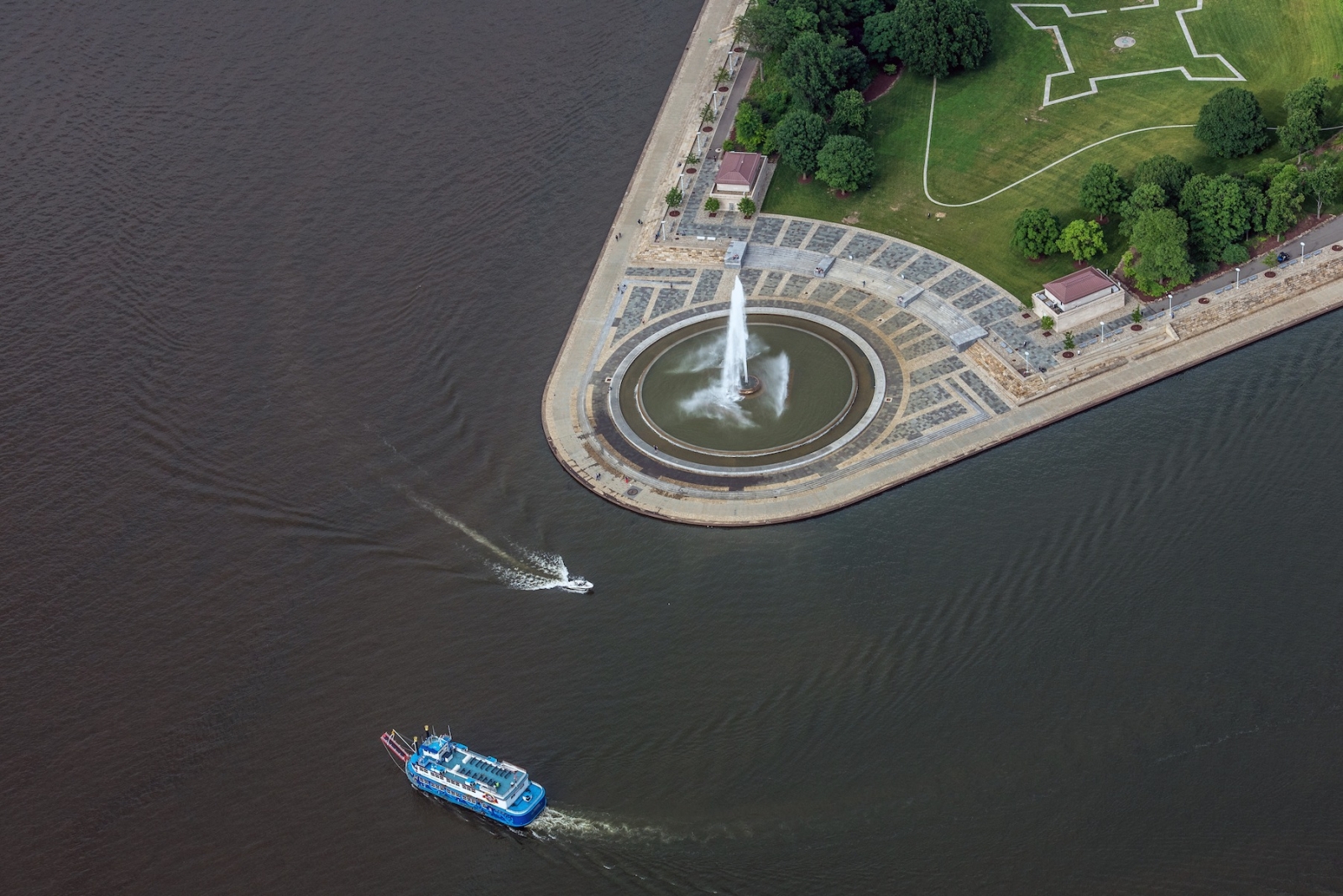 But seriously, let’s talk about the confluence (drink again!). The Golden Triangle. The Point. The eye-catching, river-embraced spot from which Pittsburgh’s skyline spreads.

Since 1974, the Point has been the location of our glorious fountain, gathering water from the fourth “river” (really an underground prehistoric aquifer) and blasting it over 100 feet into the air.

I love the fountain, and it has become an iconic representation of Pittsburgh. But what COULD have been there? And not only that, other than railroad tracks and trees, what else one occupied that small point of land?

In a previous post, I showed you this proposed alien-spaceshippy trilon of DEAR GOD NO: 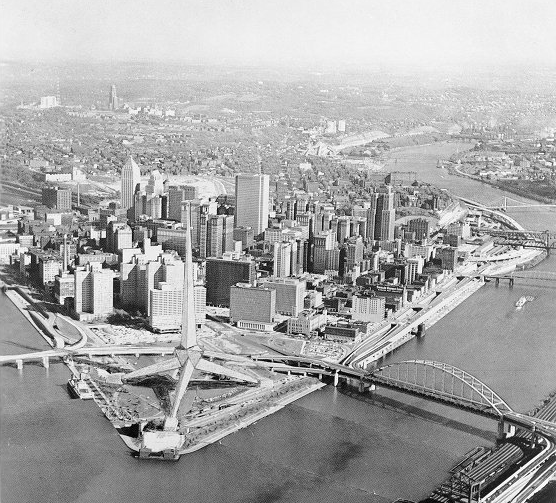 PHOTOS VIA THE HISTORICAL SOCIETY OF WESTERN PENNSYLVANIA

And I’ve shown you this enormous 1916 proposed statue of William Pitt, who never visited Pittsburgh, looking out on the confluence (ahem): 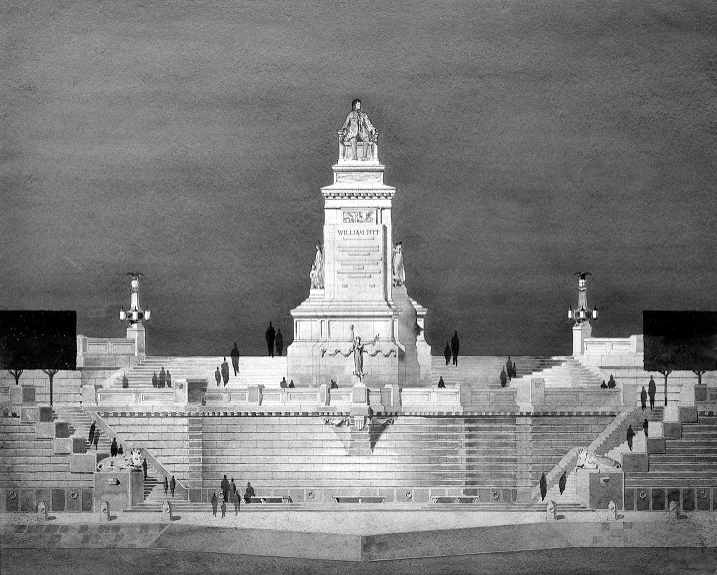 Recently, with the help of the John Heinz History Center (which should hire me to sit in a room and sift through historical Pittsburgh stuff while screaming “EUREKA!” at regular intervals) I learned of another statue that was proposed for the Point around the same time the fountain idea was taking shape. 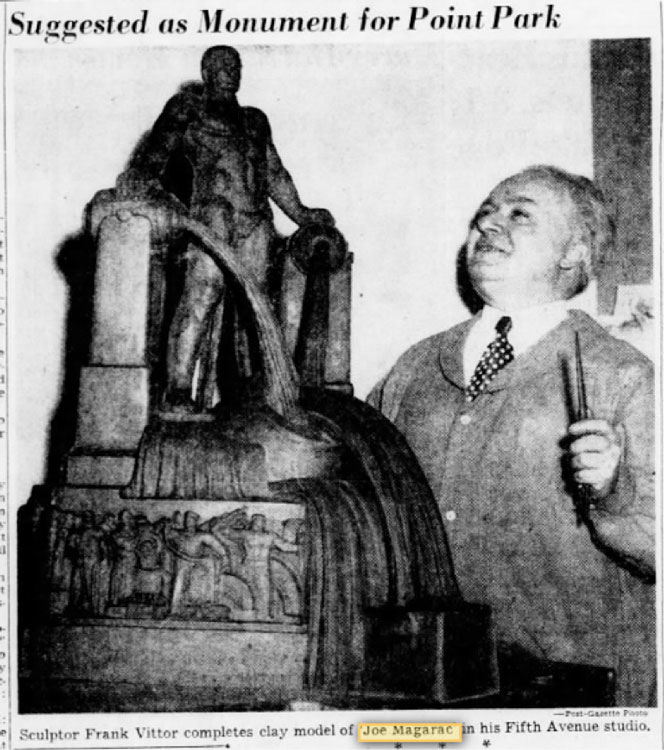 Vittor’s statue would have been made from Pittsburgh steel and would stand up to 120 feet tall. One hundred and twenty feet! That’s just five feet shorter than Rio’s Christ the Redeemer statue.

Not only that, but the entire statue description from the Post-Gazette’s piece is a bit mind-boggling:

“Each arm of the massive figure would rest on upturned steel ladles, which, in turn, would pour simulated streams of molten steel into a third ladle. That typifies the joining of the Allegheny and Monongahela Rivers to form the Ohio.

Around the base of the statue, Vittor proposes that 40 10-to-12 foot figures be carved to show how production of steel in Pittsburgh affects the cultural, social and business life of the city.

On the outer rim of the statue, Vittor has designed a system of water fountains. They would draw water from both the Mon and Allegheny and project it into 50 to 100-foot streams around the statue.

The whole monument would be lighted at night, giving color to the water. The molten metal streams would glow, day and night.

Beneath the statue, Vittor has designed a room, at least 100 by 70 feet, to serve as a museum, aquarium, or industrial display space.”

Incidentally, when the fountain was proposed, residents began petitioning to have this statue erected instead. In one report, they had gathered 1,000 signatures in support of Vittor’s idea, but as you know, their efforts were futile and the fountain won out.

I’ve learned so much about Vittor’s contributions to art in Pittsburgh that I’ll probably write a separate post exploring that in more detail at some point (Drink! … Wait.).

Back in 1913, famed Pittsburgh bridge designer Stanley Roush presented this concept for the Point, featuring a large pillar with an eagle on top. 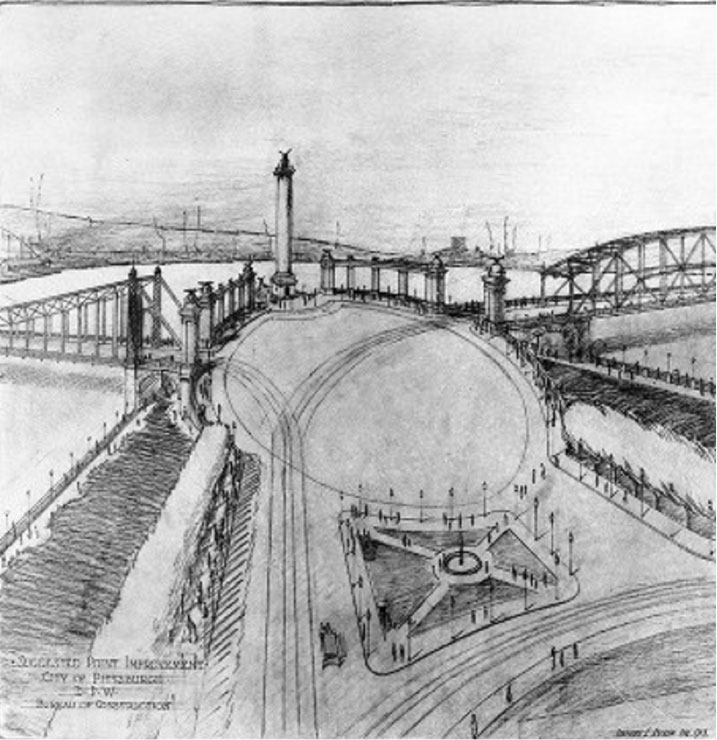 This pillar design is extremely similar to the war memorial pillars you’ll see at the entrance of the Boulevard of the Allies today – pillars which were designed by – Frank Vittor!

This year, Pittsburgh will be celebrating the bicentennial of its incorporation, but back in 1958 and 1959, Pittsburgh celebrated the bicentennial of Forbes naming the city and constructing Fort Pitt. To celebrate, the city erected three floating stages on barges at the tip of the Point, which could be viewed from a 2,500-seat amphitheater that was built where the fountain now rests.

An open-air amphitheater at the tip of the Point!

Called the Bicentennial Gateway Amphitheater, it was constructed specifically for a musical play the city produced about Pittsburgh’s history. The play, The Golden Crucible, was an elaborate nightly production featuring a cast of 70 individuals. (You can read the entire bicentennial souvenir booklet here which includes a great deal of detail about The Golden Crucible such as cast, writer, choreographer, scenes, photos, etc.)

Hunting down a photo of the amphitheater was much harder than I anticipated, but then I took a second look at that freaky trilon picture and there it is: 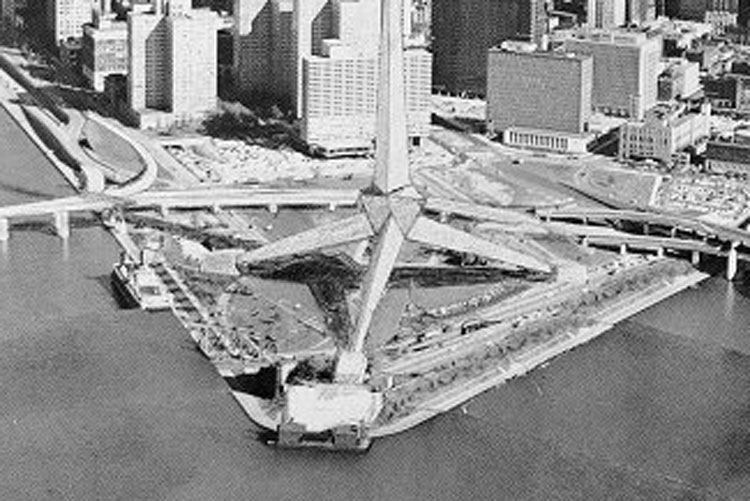 But that’s not a very clear image and I wasn’t satisfied with that being the best I could do for you, readers.

Then I discovered the Brady Stewart Collection, which features so many fantastic pictures of Pittsburgh’s history through the eyes of two generations of photographers. Their collection of 1959 skyline pictures is exactly the jackpot I was hunting for: 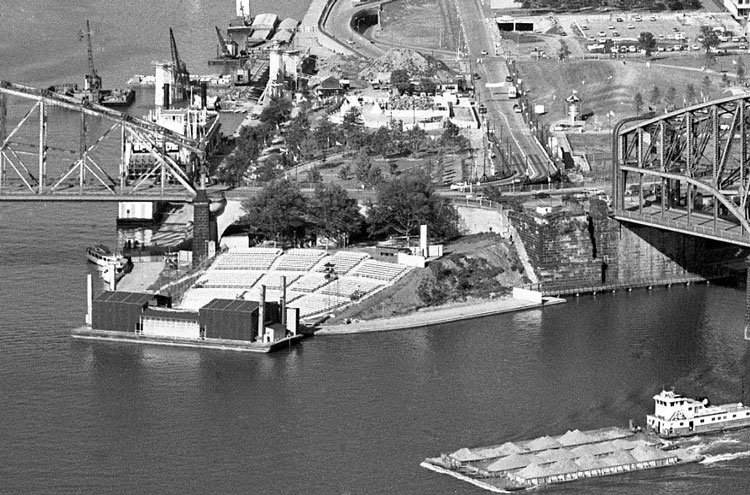 While I was down this amphitheater wormhole, I discovered who was supposed to be the first act to take the stage weeks before the Golden Crucible opened, but was unable to due to the fact that the theater wasn’t finished in time … FABIAN FORTE. Fabian was 16-years-old and performing as “The Fabulous Fabian.” He now lives in the Pittsburgh region with his wife Andrea Forte, the publisher of Gladys, a locally produced national women’s magazine.

And finally, we have this absolutely bonkers, batpoop insane idea for the Point by the one and only Frank Lloyd Wright:

My only additional comment on this design is as follows:

God bless the fountain at the Point, for it is the least insane, most beautiful of all the ideas ever presented for the confluence.

This article appears in the January 2016 issue of PittGirl.
Categories: PittGirl