Pirates' New First Baseman: ‘Never Give An At-Bat Away’

Pirates leadoff hitter John Jaso is ready for the challenges that come with a new team and a new position. 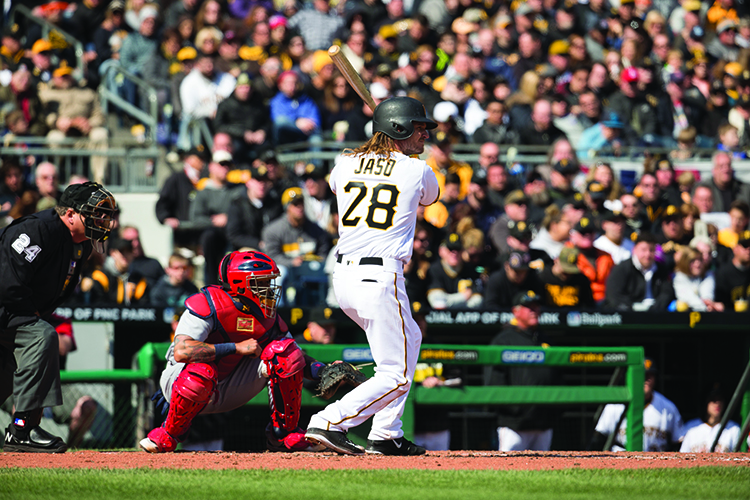 On a distressingly cold April 3, the Pittsburgh Pirates trotted onto the PNC Park field not only to begin their own campaign, but also to throw the first pitch of the 2016 season across all of Major League Baseball. The nationwide audience that tuned in to this opening tilt between the Bucs and the St. Louis Cardinals saw many of the same Pirates who had suited up for 2015’s opening contest: Andrew McCutchen, Gregory Polanco, Starling Marte, Francisco Cervelli.

At first base, though, a 32-year-old, dreadlocked Californian was making his first regular-season appearance for the Pirates.

John Jaso is the Pirates’ eighth opening-day first baseman in as many years. Even as much of the lineup has solidified by way of maintained success, the Pirates’ quest to place an effective fielder with an impactful bat at first has continued for close to a decade.

So what might separate John Jaso from the conga line of bygone first basemen who preceded him? Why should Pirates fans expect that he’ll do better than (take a deep breath, now) Pedro Alvarez, Travis Ishikawa, Gaby Sanchez, Garrett Jones, Lyle Overbay, Jeff Clement or Adam LaRoche?

“I heard a quote from Pete Rose which I think kind of sums it up — he never wants to give an at-bat away,” Jaso says. That translates to a career on-base percentage of .360; among Pirates with ample appearances, only McCutchen and Cervelli topped that mark in 2015.

Jaso’s ability to tenaciously work deep into counts and draw walks helped to make him an alluring solution for the Pirates, who signed him as a free agent in December. Manager Clint Hurdle began the season with Jaso batting leadoff; despite lacking some of the speed typical of a leadoff hitter, Hurdle wanted to increase the likelihood that McCutchen and new third baseman David Freese would come to bat with a Pirates player already prowling the basepaths.

“I’m looking for him just to be the on-base guy that he’s been in the past,” Hurdle says.

First is not Jaso’s natural position; with the Tampa Bay Rays, Seattle Mariners and Oakland Athletics, he appeared mostly as a catcher. Injuries drove him away from the position; he experienced difficulty recovering after concussions suffered as a result of balls fouled into his mask. His recovery brought him to Pittsburgh long before he joined the Pirates; he was treated by Dr. Michael “Micky” Collins, the director of UPMC’s Sports Medicine Concussion Program. “He was just giving me a lot of very sound advice,” Jaso says. “And data that he’s collected has helped me process what I’m going through and what my brain is going through.”

Despite playing more at first during the Pirates’ opening game than he had in his entire career to that point, Jaso approached his new position with mellow confidence. Former Bucs first baseman Kevin Young mentored Jaso through the spring, helping him to change tendencies that had become second nature over years spent behind the plate. The goal, he says, was simply “breaking [old] habits and getting to where I’m comfortable setting up like this. Not even thinking about it.”

A glance at the season results for two of Jaso’s recent clubs will reveal some similarities with his new team. The Athletics lost a Divisional-round playoff series in 2013 and a Wild Card game in 2014, just as the Pirates did. The Rays bowed out in Divisional series in 2010 and ’11. Jaso has seen young, smart teams succeed and qualify for the postseason — without making it to the World Series.

Reflecting on those experiences, Jaso does not bemoan opportunities lost; rather, he remembers those successes as exciting and encouraging. He says the reward of October baseball provides plenty of motivation, regardless of the result. “It’s just a challenge as a group and a great accomplishment as a group to have that feeling,” he says. “You want it again. It gives you something to play for.”

This article appears in the May 2016 issue of Pittsburgh Magazine.
Categories: Pirates