Perspectives: The Gift of Practice

I love this word, “practice.” It is an exercise, a pattern, a rhythm to set your weeks to ... and it's cheaper than therapy. 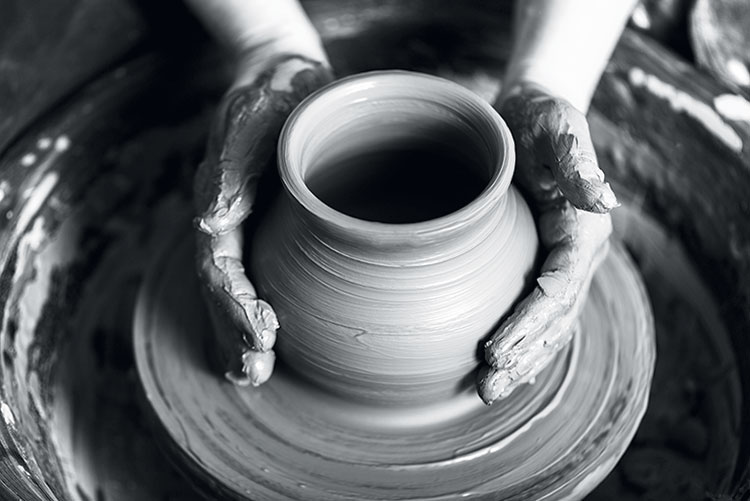 I was 10 years old, fresh from seeing the movie “Ghost,” when I first started thinking about ceramics. It was so perfect as I pictured it. I’d sit at a wheel, my hands covered in wet clay and, hopefully, Patrick Swayze’s naked torso curling around my back. And while this fantasy included a heavy dose of pre-teen sexuality, it also tapped into something very real for me — a deep desire to hone a craft. I imagined it would be solitary, serious and sexy. Back then I didn’t think much about the reality of making a living through art.

By the time I got around to taking a ceramics class, I was an adult and a full-time writer. I justified adding the cost of the class to my already-tight budget by telling myself that I could offset the cost of Christmas gifts by making beautifully glazed platters, vases and serving bowls for my family. As it turns out, it took me months to make the thing I thought I would begin with: a mug. The walls were uneven, the bottom impossibly thick, the glaze drippy. I gave it to a friend whose partner calls it “the bludgeoner.” It holds coffee, sure, but it would be put to better use as a weapon.

My lack of instantaneous talent didn’t matter; the struggle itself began to change me. I learned that if I wanted the clay to comply, I had to meet it with mental quiet — no story pitches tumbling around in my head, no interview subjects to track down. In the studio, my focus became this: keep the breath steady, keep the hands steady, keep the pot steady.

It was intoxicating. As deadlines loomed and new edits came in, I began to want to spend all my time at the studio. I wanted to escape. It wasn’t conscious, but it came tumbling out one cool, dark night, sitting on a porch with another writer, drinking beers and reassessing our skill sets. We agreed that this writing gig was way too hard, too unforgiving. New lives came up shimmering. “I’ll be a yoga teacher!” she said. I laughed, deliriously, at the financial reality of the situation. But I had my own wildly unsustainable alternative: “I’ll be a potter!”

We swigged our beers and wilted into deep sighs — nothing we cared about was profitable. In the morning, we turned back to our line edits, our book-babies. But as the objects I made in the studio were beginning to approach reasonable functionality, I began to return to that wild idea. If I could get a little better at this, maybe I could actually make a small amount of money off of it. A store on Etsy. A table set up on my stoop. Just enough to offset the cost of the studio time. This is what I’ve done with writing, after all. The craft of writing sustains my life — why shouldn’t this other craft at least sustain itself?

But when I went into the studio with this possibility in my mind, the clay seemed to know it. Pot after pot crumbled under the slightest pressure to be good. An error became a problem, experimentation a risk, everything measured by potential profit or loss. That day, ceramics lost its core gift to me: the gift of pure practice.

I love this word, “practice.” It is not a job, not a thing you do for someone else, not an effort towards pleasing. It is an exercise, a pattern, a rhythm to set your weeks to. And even if it doesn’t sustain itself financially, it is, as another potter said to me, cheaper than therapy.

When I return to the studio, it is to the practice that I return. I ask questions of my peers only when I am truly lost, when I’ve exhausted my own resources of figuring it out. Someone more expert than I always offers gentle advice, perfectly limited in scope, just enough to get over the hump. And then I go back to why I’m really there: My own quiet, solitary rhythm of fumbling.

Katie Booth’s work has appeared in Harper’s Magazine, The Believer, WHYY’s The Pulse and Vela, among other publications. She was a 2017-18 John W. Kluge fellow at the Library of Congress, and her first book, “The Illusion of Miracles,” is forthcoming from Simon & Schuster in 2020.

This article appears in the September 2019 issue of Pittsburgh Magazine.
Categories: Collier’s Weekly, From the Magazine