Perspectives: So, How’s the Drive on the Southern Beltway?

Before we deal with the necessity and cost of the new highway, let’s decide if it’s a pleasant drive. 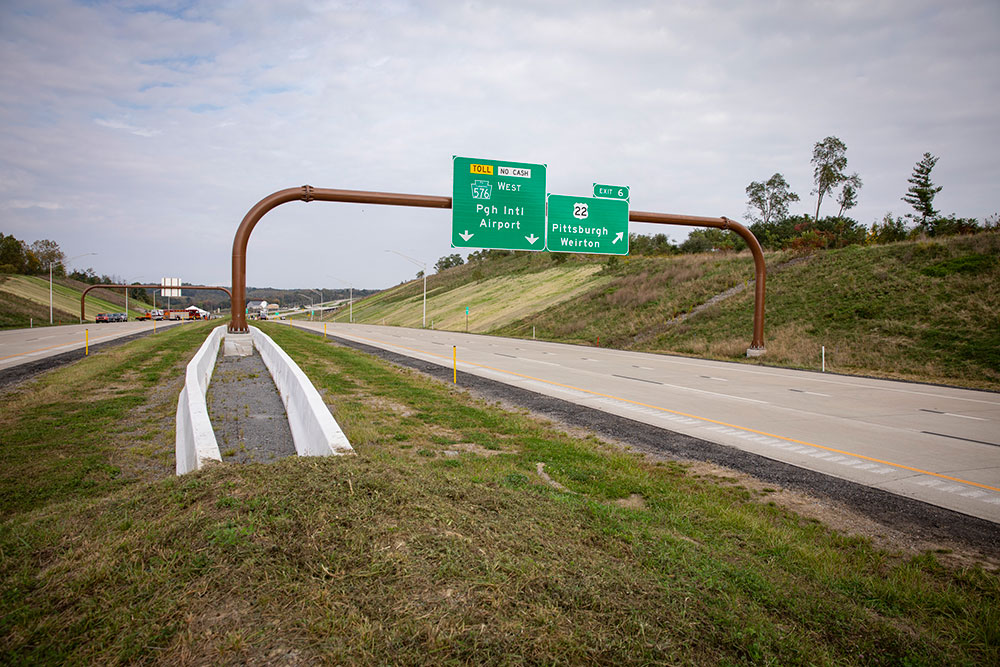 Amid the blend of fanfare, confusion and grousing that has accompanied the opening of Pennsylvania Turnpike 576 — colloquially, the Southern Beltway — one question has gone unanswered.

Is it, you know, nice to drive on?

While not everyone pays attention to how pleasant a given roadway is, it can make a big difference. Going southbound on Route 51, for example, is a start-and-stop nightmare of variable speed limits and sudden lane changes, only occasionally broken up by a place that sells fudge. Interstate 79 North, on the other hand (at least once you’re past Cranberry), is a placid, easy-rolling journey; you can zone out for what seems like a minute and realize you’re already at the Grove City Outlets.

I made the westbound journey on the new road — a long-developing project mandated by the state legislature decades ago — from its terminus on I-79, a bit north of Canonsburg, to its most prominent destination, Pittsburgh International Airport. The drive took about 16 minutes.

It’s a gentle, rolling road with a handful of lovely views, including a nice panorama of McDonald, which sits just to the north of the highway. In a state full of roads badly in need of repair, it’s lovely to be on fresh pavement that never once rattles my tires. And, on a cool fall evening, the southern beltway feels like a proper journey (albeit a short one) — a nice trip from one place to another. My good mood may have been aided by the knowledge that I was headed for the Robinson Cracker Barrel once my trip was completed — who doesn’t love a very hearty breakfast for about nine bucks — but still, it’s a nice drive.

Also among the nice points: There was nearly no one on the road.

This is where it gets complicated.

Under current conditions, the Southern Beltway doesn’t exactly offer much in the way of access or convenience. If you live or work off of one of the exits, it probably saves you a few minutes here and there. But even its nominal shortcut — getting from points south, such as Canonsburg and Washington, to the airport — is at best a mild time saver. Without traffic, there’s only about a half-mile (about a minute) of savings in taking the beltway versus following I-79 north to the parkway. Yes, that’ll stack if you happen to be headed to the airport during rush hour, although rush hours around here have never recovered to pre-COVID levels (although that change, of course, couldn’t have been anticipated during the 40-year planning period).

And while that shortcut may or may not save you time, you’ll trade cash for your minutes; with an EZ-Pass, the full sweep of the road costs $3.90. That fee doubles for those of us (myself included) who are still too lazy to sign up for an EZ-Pass.

Even in heavy traffic: Is saving 15 minutes on the way to the airport worth nearly eight bucks? Or even four? I might just leave earlier. (Though I’d be glad for the shortcut if packing got away from me.)

Saving Washingtonians 10 minutes en route to Orlando isn’t the real point of the road; the point is to attract investment and development along the highway. Time will tell on that goal; there are certainly plenty of highways in this state and beyond that hoped to spur development, only for business never to come. It could be the case that, 10 or 20 years from now, the road is bustling.

I hope it is. Because if that doesn’t come to pass, then the state just spent 40 years and close to a billion dollars on an admittedly pleasant drive to nowhere in particular.