Hockey, friends and sushi helped the pair find one another. 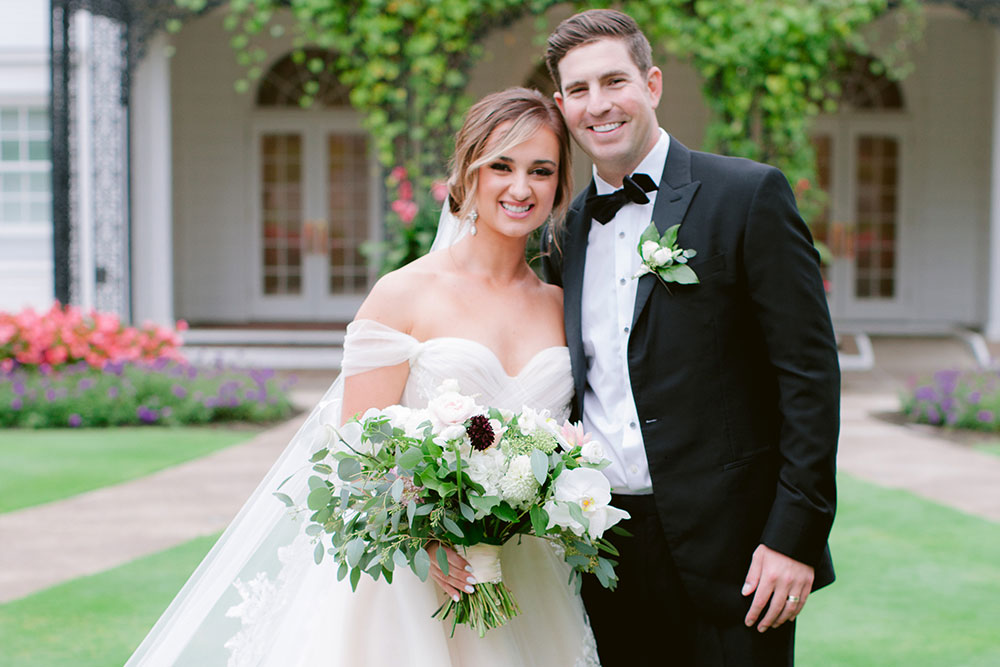 Emmy Award-winning television personality and KDKA-TV Pittsburgh Today Live reporter Celina Pompeani is a familiar face in Pittsburgh, especially at PPG Paints Arena. As the in-arena host for the Pittsburgh Penguins, she spends most of her evenings from the fall into the spring announcing home games.

Those evenings changed her life forever when a Penguins coworker and his cousin worked to set her up with the cousin’s friend, Mac Mathison, asking if she’d be interested in meeting him for a date in 2018.

“I trust those two so much,” Celina says, “so I had a good feeling from the get-go.”

She gave her friend permission to share her phone number with Mac. Once the two started texting, she searched his name online. Mac didn’t have any public social media accounts, however, and the only thing she could find about him was a single company photo ­— Mac works in the financial services industry. 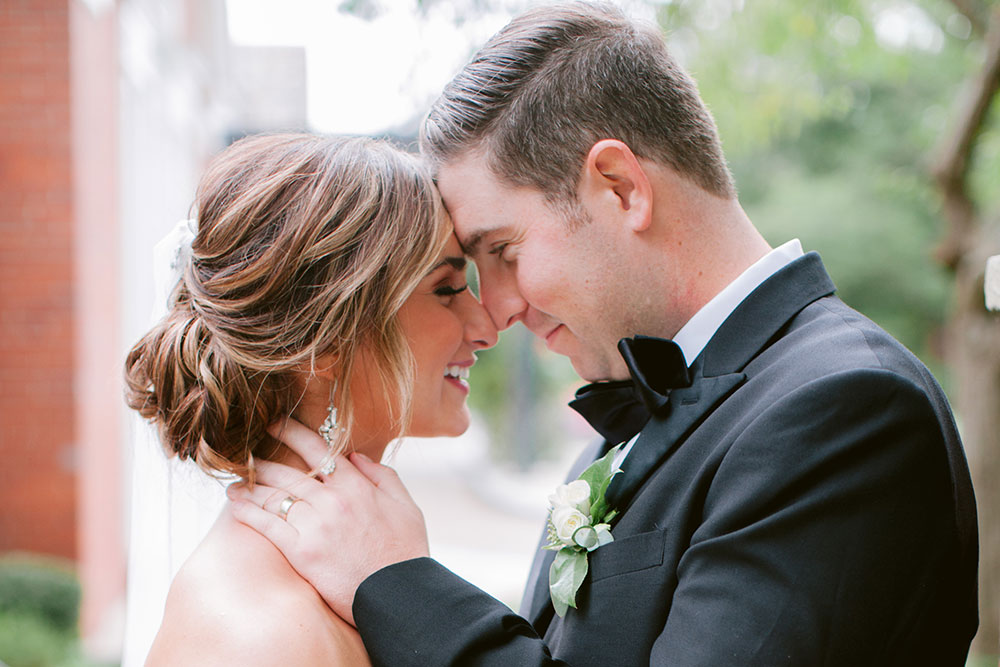 Mac asked her on a date to Little Tokyo Restaurant in Mt. Lebanon because he knew she loved sushi. When they first met, he was as captivated by Celina as she was him.

“I walked into Little Tokyo, and I have to admit,” Mac says, “I was a little bit intimidated. She was dressed in a big fur coat with high heels on, and she just really, really looked beautiful.”

They got lost in conversation about friends, families and their shared Christian faith.

“We were having such a nice time on our first date,” he says, “then all of a sudden, we heard the door close and lock … We looked up, and we were the only people remaining in the restaurant.”

Any anxiety Mac felt melted away once that first date ended.

“She was such a warm, good-hearted person,” he says. “As soon as we met for the first time and really got to know each other … I felt relaxed from that day forward because of the way that she makes you feel. She makes me a better person.”

Celina called their first date at Little Tokyo a “blessing” and  says it proved to her that she was right about everything she said when she first laid eyes on his photograph.

“I was like, ‘Oh my God, this is crazy,’” she says. “I made a list of what I wanted in my husband, and I prayed to God every night for as long as I could … It was like God delivered Mac to me.”

Mac and Celina soon introduced each other to their childhood friends over food at the former restaurant Nola on the Square in Market Square. After a successful dinner, they met each other’s families, which sealed the deal for the couple.

“From that moment on,” Celina says, “I was like, ‘I don’t need any more confirmation. This is it for me.’” 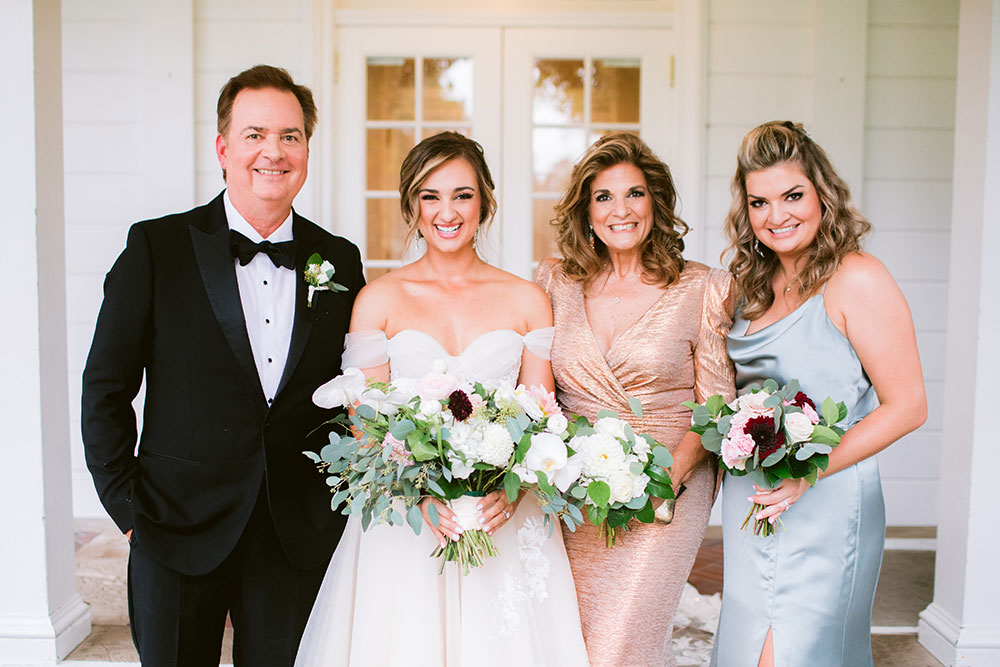 When Celina’s parents, Bob and Lisa Pompeani, met Mac, they didn’t need any more confirmation either.

“He just stands out,” Lisa says. “He just exudes kindness, which is really, really a good quality to have. He’s very sincere in his ways, too, which was very impressive.”

Just like Celina, Bob, the sports director at KDKA, could tell that Mac was a kind, genuine man from looking into his eyes.

“My wife has always told me you can tell a lot about a person by looking at their eyes,” Bob says. “When I saw his eyes, I knew we were talking about a responsible person and a caring person … We saw all those qualities, and humility, and most of all, real love for my daughter.”

Mac and Celina spent the following year and a half growing their relationship, traveling together to Toronto, Aruba and The Breakers Hotel at Palm Beach.

“At The Breakers Hotel,” Celina says, “we were having dinner at a place called Seafood Bar, and we were just having such a great time. We said to each other, ‘I know you’re my person. I want to marry you.’”

When they returned home, Mac was determined to give Celina a romantic proposal. They planned another vacation to The Breakers Hotel exactly one year later, and he reached out to Celina’s parents to get their blessing

“They gave it to me, which was such a vote of confidence,” he says.

He picked out an engagement ring with the help of Celina’s mom and her sister, Chelsea. When their second trip to The Breakers rolled around in July 2020, he carefully hid the ring in his carry-on and wrote “Engagement ring, please be discreet” on its outer box to keep airport security from accidentally revealing the surprise.

Celina suspected he might’ve been up to something, but she helped plan the vacation, which made her doubt that Mac would propose. On their way to dinner, Mac told her they needed to stop outside the restaurant first to say hello to his mother’s old coworker.

There was no coworker waiting for them. Instead, Mac led her to a grassy bank near the ocean, which was surrounded by photographers hiding in bushes.

“This whole time, I’m a nervous wreck,” Mac says. “But she went along with it. We got to this perfect spot that was overlooking the ocean with beautiful palm trees everywhere, and I got down on one knee and asked her to marry me.” 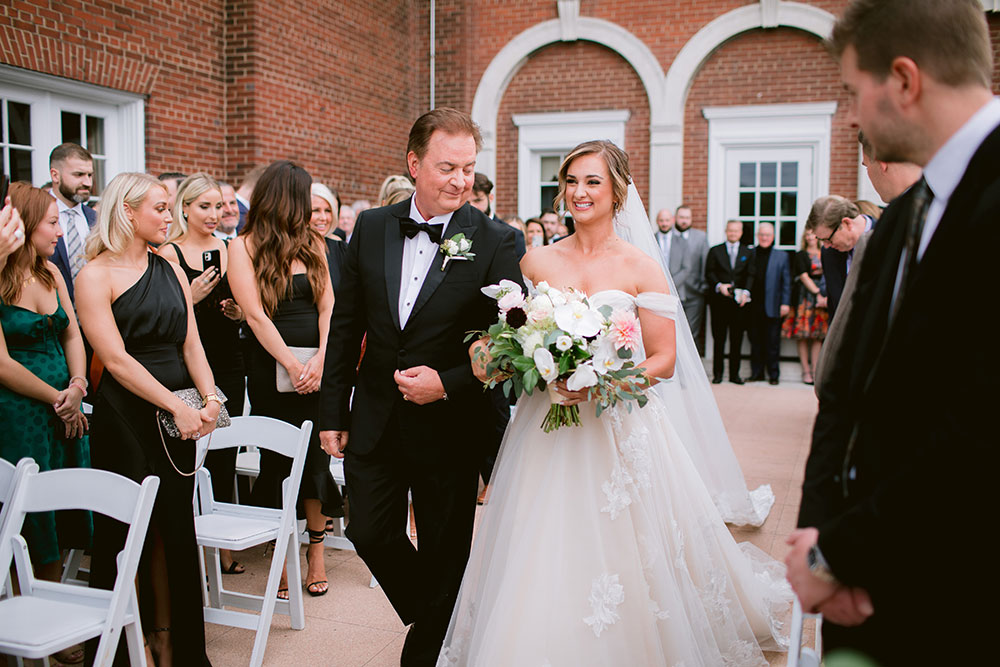 Little did he know, Celina was more than ready and had already reserved her dream wedding venue, Fox Chapel Golf Club. She heard from a friend that the venue’s 2021 schedule was filling up quickly due to COVID-19 rescheduling and wanted to ensure they could get married on the date they wanted.

They began planning their wedding as soon as they returned to Pittsburgh, and their families were eager to help.

“We were so fortunate to be able to lean on Celina’s parents, my own parents, Celina’s sister Chelsea, and my sister Kathleen,” Mac says. “They just made our lives so much easier. And I think it speaks to a character trait that Celina and I both have: we’re slow-burn individuals. We really don’t get too overwhelmed or stressed out … We were just happy to be engaged and to be getting married.”

The couple held a private ceremony with family on Friday, Sept. 24, officiated by Bishop David Zubik at St. Paul Cathedral in Oakland before their rehearsal dinner at LeMont Restaurant on Mount Washington. The next day, they held a larger ceremony, officiated by Pastor Doug Rehberg, who had officiated Celina’s sister’s wedding, and a reception with family and friends at Fox Chapel Golf Club.

Mac says that now, a few months after the wedding, “our relationship is just as strong if not stronger. It just makes me feel like everything is right in the world now.”

Celina tears up when she recalls her wedding weekend.

“My dad made us cry so hard [with his speech],” she says. “My sister’s speech was amazing, and Mac had two best men, Mike and Eric, and they gave such a beautiful speech as well. … My first dance was to “Wonderful Tonight” by Eric Clapton. … It was just so special dancing with [Mac] knowing that we made it, and this is my husband.” 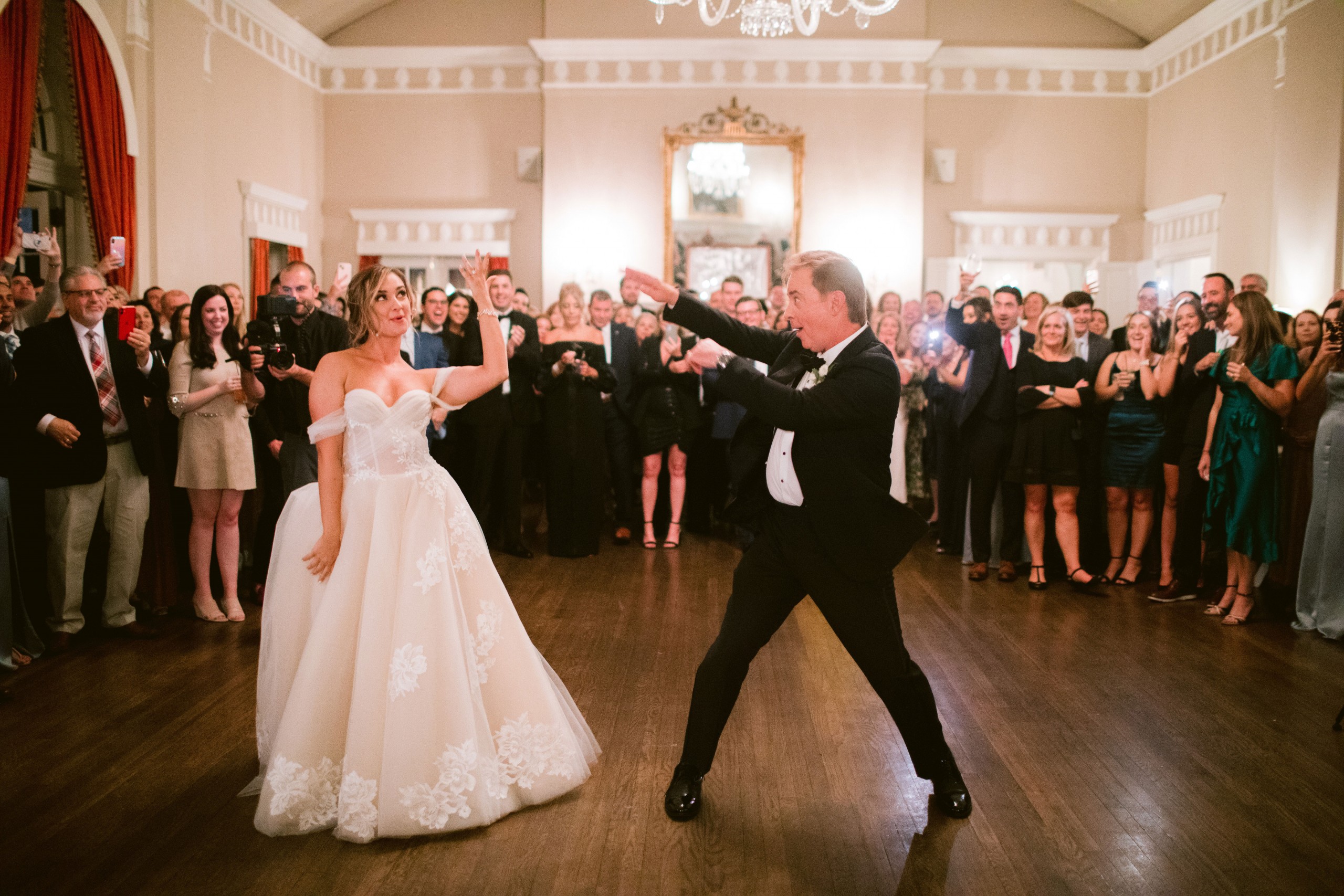 She also bought dancing lessons for her dad and choreographed a hip-hop routine for their father-daughter dance as a thank you for all of the work he put into the planning.

“It was a fun moment,” Bob says. “And I enjoyed the steps along the way, with learning [the dance]. Because I think as you’re getting older, you start appreciating the steps, the entire journey, not just the day of, but all the things that happened leading up to it. And, man, that’s the fun part of it.”

Celina and Mac add that no matter how you plan a wedding, it’s what comes after that matters.

“The end goal was to marry my favorite person in the entire world,” Celina says.

This article appears in the February 2022 issue of Pittsburgh Magazine.
Categories: From the Magazine, Hot Reads, Weddings