“Our Lady of The Parkway” Gets Landmark Status 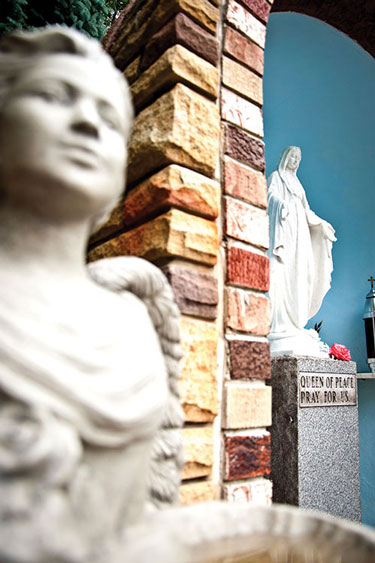 If your daily commute involves a drive on the Parkway East, you might have said a quick prayer a few times in your life. If you looked heavenward in Oakland as you said those prayers, you may have noticed  “Our Lady of the Parkway” high on the cliff watching over you.

The Shrine of the Blessed Mother in South Oakland was officially recognized as a historic landmark by Pittsburgh’s city council after a recent vote. Affectionately dubbed “Our Lady of the Parkway” by locals and volunteer care-takers, the outdoor statue has watched over the highway for 64 years.

Pittsburgh’s Planning Commission in August recommended that city council officially commemorate the space as a historic landmark. The altar faces Downtown and is surrounded by flowers, benches and walking paths.

“The shrine was created by a diverse group of community members from the South Oakland neighborhood in the 1950s and its location offers architectural and geological features that celebrate this unique and diverse Pittsburgh fellowship,” Mayor Bill Peduto says in a statement.

Created in 1956, it has always been maintained in an unofficial manner by volunteers. The Catholic Diocese of Pittsburgh owns the land where the shrine stands, but not the land up for historic recognition, which is owned by the city. Regardless of its ownership, the shrine serves as a place of prayer and meditation for community members.

According to Councilman Bruce Kraus, the shrine will continue to be cared for by volunteers. He would like a commemorative plaque or sign to be installed on-site and is pursuing the fundraising and research necessary for that endeavor himself.

“The shrine’s highly visible location has historically provided a place of cultural significance to those who pass it — including the steelworkers along the river who could look up and see her during the grueling day,” Peduto says.