Our 50 Years: Love for Imperfect Pittsburgh

Hidden within a 38-year-old essay collection, former Pittsburgh Magazine contributor Evan Pattak may have perfectly summed up the Steel City. 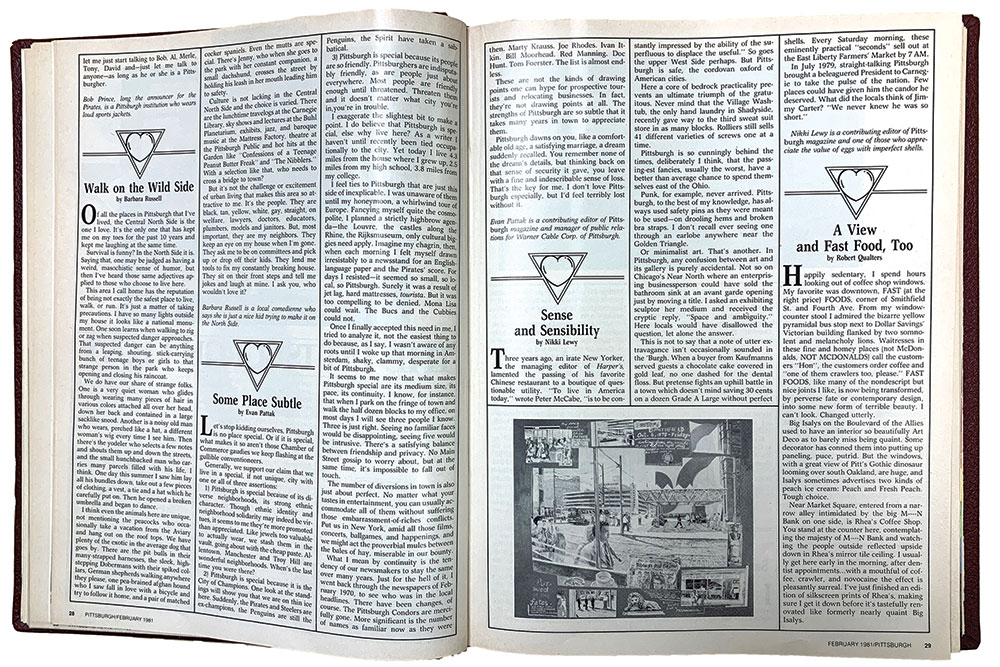 In an essay published in our February 1981 issue, then-contributing editor Evan Pattak wrote five words I was stunned to find in our archives.

It’s standard operating procedure for a city magazine to offer takes on the general character of a place. Some of the essays that appear in our present-day “Perspectives” feature take this approach, and I’m glad for them; in an era of increasing homogenization, it’s good for regional publications to remind why a specific place remains distinct, unique, remarkable.

I’m more interested, however, in essays that offer nuanced assessments of Pittsburgh. I’m drawn to those opinions that, rather than simply cheering for the gridiron and pig-iron laurels of our region, encourage it to be ever improving.

Like, say, Pattak’s thoughts. The occasion was a series of Valentine’s letters to the city. “The Pittsburgh I Love,” as the collection was called, was an omnibus of Pittsburgh analysis, opening with an amiable recollection from legendary Pirates broadcaster Bob Prince. (He managed to invoke Heinz, Westinghouse, U.S. Steel, Alcoa and PPG in the same paragraph, which has to be some sort of record.)

Pattak, however, had a different tone.

“If [Pittsburgh] is special,” he wrote, “what makes it so aren’t those Chamber of Commerce gaudies we keep flashing at the gullible conventioneers.” Or, to update the point dramatically, those we put into a sizzle reel for Amazon.

“It seems to me now that what makes Pittsburgh special are its medium size, its pace, its continuity,” Pattak wrote. “I know, for instance, that when I park on the fringe of town and walk the half dozen blocks to my office, on most days I will see three people I know. Three is just right. Seeing no familiar faces would be disappointing, seeing five would be intrusive.

“The number of diversions in town is also just about perfect,” Pattak said. “No matter what your tastes in entertainment, you can usually accommodate all of them without suffering those embarrassment-of-riches conflicts.”

I enjoyed an essay by Mary Rawson, as well — then credited as a producer of WQED-TV’s “Lyceum,” now known primarily as a fine local actress. “I love Pittsburgh for its faults,” she began, enumerating how the city’s character is more easily captured in its contradictions — “The mass transit is dependable — not to be mass and not to be transit. The liquor stores have made it their business to encourage depression without the use of alcohol” — and how its foibles become charms. “The only love worth its salt accepts imperfection as the stuff of character. Hence my love for Pittsburgh.”

I keep returning to Pattak’s essay, however. If you’ll forgive a bit of retrospective bait-and-switch, the five words that began this piece were taken well out of context. I think that the complete final paragraph of Pattak’s essay actually represents as true and perfect an encapsulation of the city as I’ve found in our archives — and a perfect way to conclude our year-long look at Pittsburgh Magazine’s 50-year history.

“Pittsburgh dawns on you, like a comfortable old age, a satisfying marriage, a dream suddenly recalled. You remember none of the dream’s details, but thinking back on that sense of security it gave, you leave with a fine and indescribable sense of loss. That’s the key for me. I don’t love Pittsburgh especially, but I’d feel terribly lost without it.”

This article appears in the December 2019 issue of Pittsburgh Magazine.
Categories: From the Magazine, Hot Reads, Then/Now