Only in Pittsburgh: The Blast Furnace Wedding Venue

Carrie Furnace is one of three intimate, uniquely Pittsburgh wedding venues that can accommodate every style from homestyle to rock-and-roll. 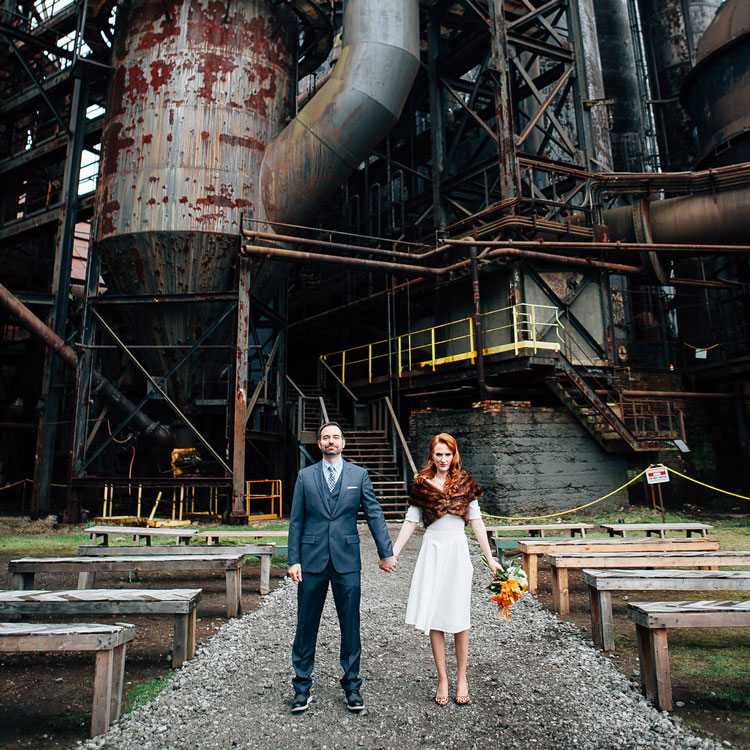 The pair had worked with Carrie Furnace, a national historic landmark that is home to the only still-standing, nonoperative blast furnace in the nation, on projects through their work in architecture and arts management, and they loved the site, especially the Carrie Deer sculpture. Their ceremony took place near the art piece in front of 100 of their friends and family members. 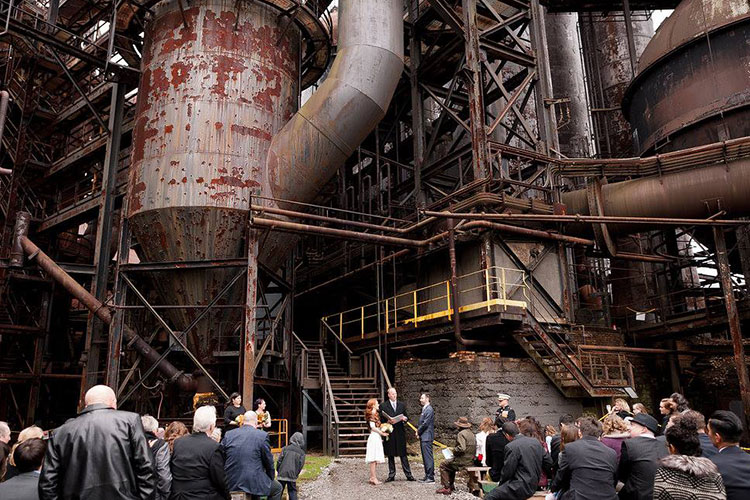 The ceremony, held on April 1, 2017, was very “barebones,” as Kathryn describes it, as they wanted it to be “raw and personal,” something that reflects the couple’s nature. They brought in their own lighting and decorations, as well as a band Kathryn put together of her friends.

Kathryn and Jonathan followed their ceremony with a reception at the Serbian Club with an Eastern European feast via Apple Harvest Catering of chicken paprikash, pierogi and haluski.

“From the date to the ceremony/reception locations, from the hotel to the Friday reception, from the food choices to the playlists — everything about this wedding has a connection to our relationship, and to Pittsburgh’s fascinating industrial heritage and history,” Kathryn says. 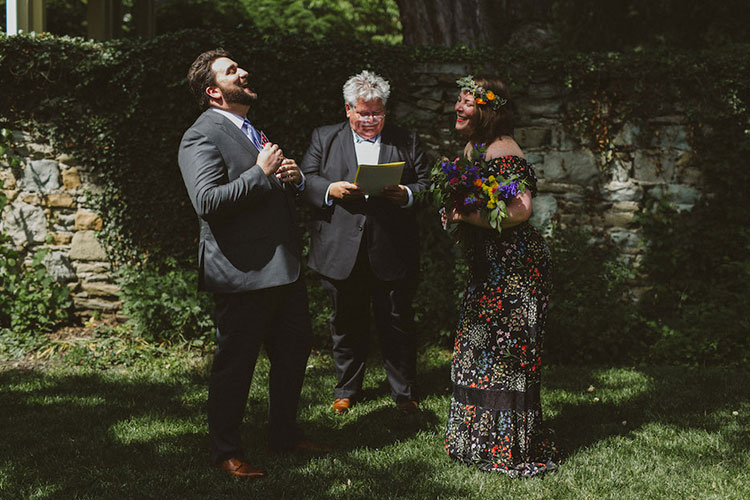 Annie Ranttila and Zavo Gabriel struggled to find a venue to fit their vision for their wedding on June 18, 2016: a budget friendly, family- and food-oriented day. Until they found Point Breezeway (pointbreezeway.com).

“I never had that fairytale idea of a wedding with a white dress,” Annie says. “We were looking for a comfortable place to bring our families together and eat good food.” 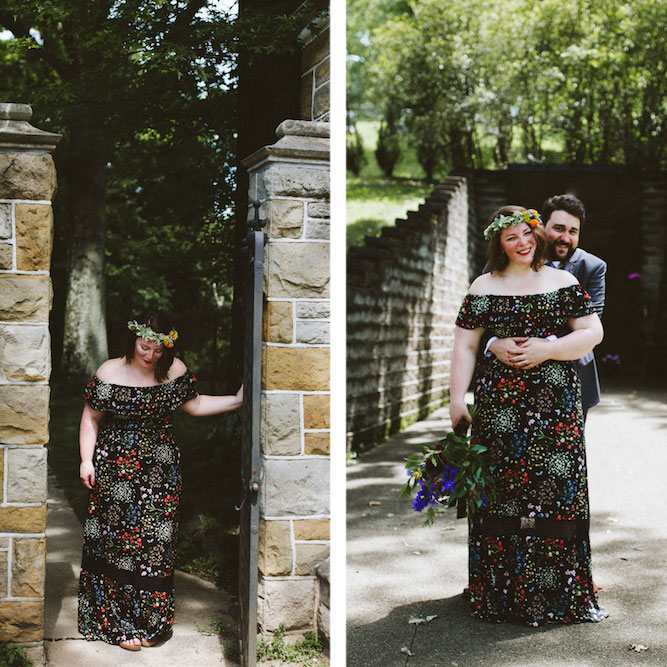 Originally built in 1880 as a utility barn, Point Breezeway has been transformed over the years from a barn to a speakeasy to a grocery market. After it was taken over by Lauren McMillen and her father in 2014, the space added: family-owned wedding and event space to its long list of functions. Inside the hidden-in-plain-site structure on Reynolds Street in Point Breeze is an intimate tea room with handmade craft tables and floor-to-ceiling French doors and a speakeasy setting that resembles an early American tavern. There’s also an intimate backyard space. (Bonus: it’s a short walk from Frick Park, a popular spot for wedding photos.)

The couple had been looking at more “typical” venues, but everything seemed to be out of their budget. At Point Breezeway, they were able to bring in their own food, which allowed them to stay in budget and choose exactly what they wanted to serve their guests: the ultimate comfort food, pizza and beer they brewed themselves.

“It became super family-oriented, which was very unexpected, but a great benefit of the flexibility [at Point Breezeway],” Annie says.

Annie and Zavo had a self-uniting ceremony where they made vows to each other, to the state and to their family and friends, and Annie says Lauren made their non-traditional wedding feel normal.

“There was no judgment in wanting to do anything different,” Annie says. “I would consider her a friend, not just a vendor I worked with.” 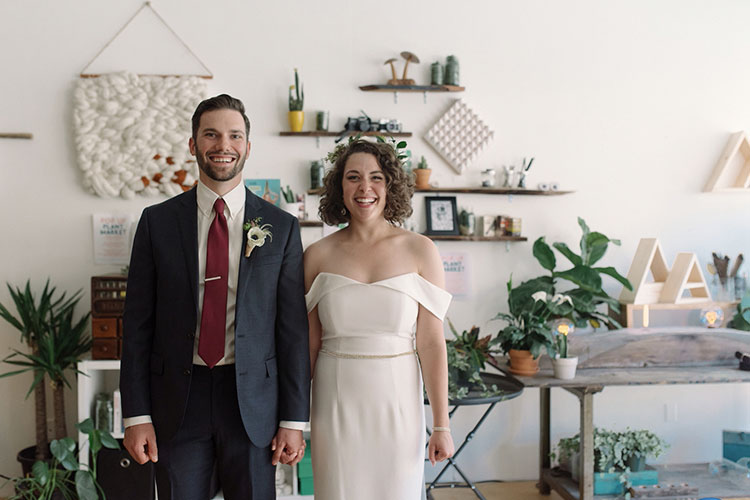 Pick up your pencils and paint brush, Workshop PGH (workshoppgh.com) is calling all DIY brides. Workshop originated eight years ago in San Francisco, and when co-founder Kelly Malone, who grew up in Ligonier, moved back to the Pittsburgh area, she decided to open a workshop in Bloomfield. The venue offers couples a custom wedding space, giving them a chance to get creative. Or, if you’re like Adam Richman and Marissa Kaplan, giving couples their dream DIY wedding in a space perfectly outfitted for their needs.

“I was really excited to marry Adam, but I wasn’t invested in what color napkins we had and the rest of the details that come with planning a wedding,” Marissa says. “I wanted it to be about the people who came rather than the stuff.” 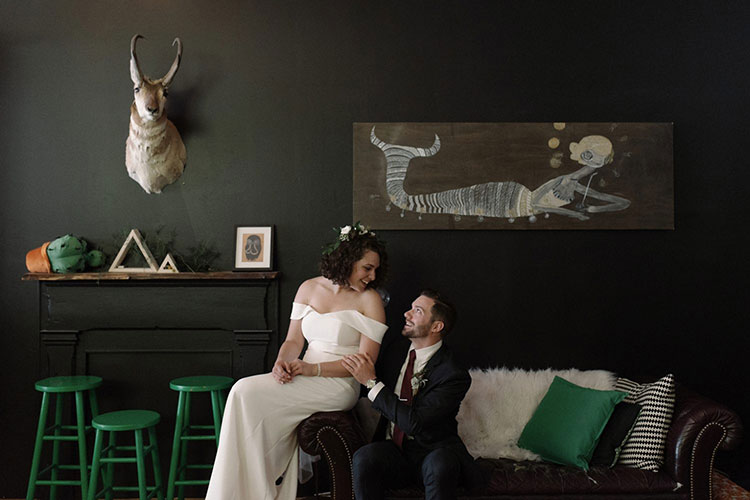 The couple was looking to show off their love for Pittsburgh, and after having enjoyed previous visits to Workshop, they decided it would be the perfect place to gather their 30 guests for a “cake and punch dance party” following their ceremony at Frick Park on May 20, 2017.

Kelly designed a custom wedding space, as she does for each couple, that accentuated the work space Adam and Marissa loved so much.

“She was pumped about our wedding and was able to accomplish exactly what we were looking for,” Marissa says. “And we didn’t have to stay up late nights scrambling to get everything done.”

Kelly and her team designed and decorated everything from the lights, to the handmade cutting boards and planks used to cut and serve the cake, to the flower crown that Marissa wore. The bride says Kelly was willing to go as far as paint the floors if they wanted.

“We had an idea, and she took her expertise and made suggestions we ended up loving,” Marissa says. For example, the couple didn’t want a traditional guest book, so Kelly designed a DIY craft station for guests to create personal cards.

“They were super nice, really professional and went way beyond what they had to do,” Marissa says.