The owner of one the neighborhood’s oldest houses is moving to New York City. 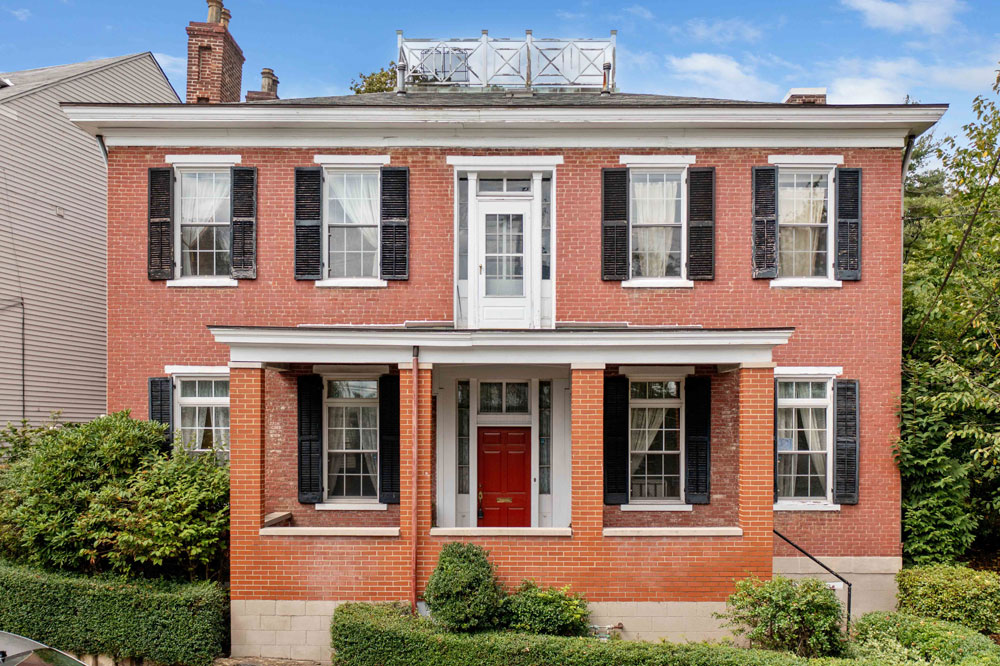 When Shirin Fozi and her husband, Thomas, moved to Pittsburgh from Chicago in 2013, they hoped to take advantage of the hilly terrain by finding a property with great views of Downtown.

When they discovered 1208 Haslage St., they found the views were just as spectacular as in other parts of the city more famous for its vistas. Considered one of the oldest homes in Spring Hill, the brick, two-story Greek Revival-style home has four bedrooms, a charming kitchen and classic, original touches.

“It was love at first sight,” Fozi says of the home. “It was built during the Civil War.” 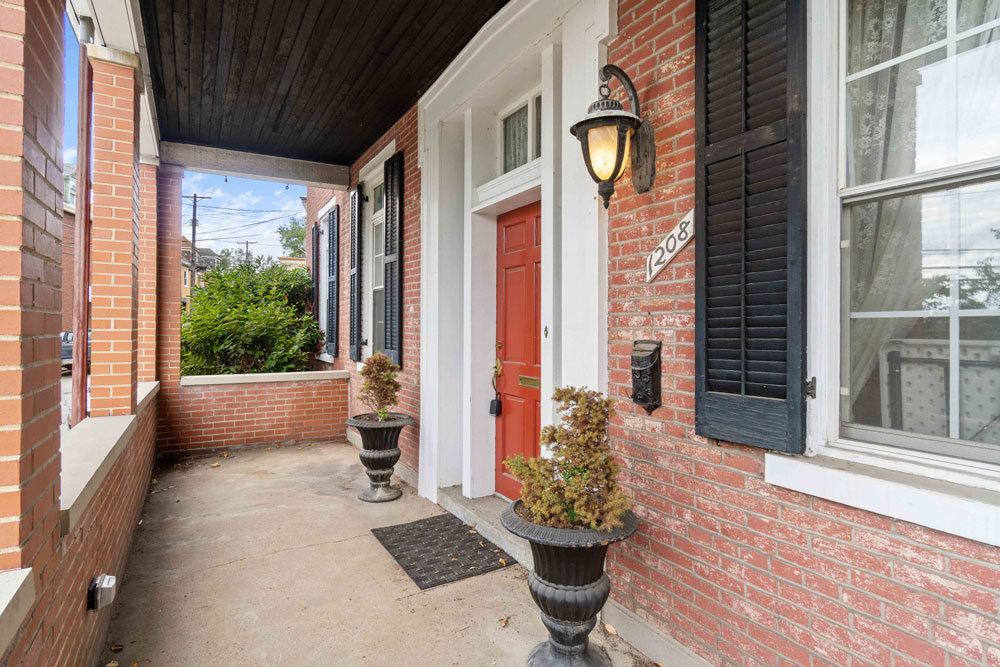 A former professor in medieval and renaissance studies at the University of Pittsburgh, Fozi recently was offered a position at the Metropolitan Museum of Art in New York City as the associate curator in the Department of Medieval Art and The Cloisters.

“It is a once-in-a-lifetime opportunity, and the only thing that could have pulled us out of our home,” she says.

Late Pittsburgh house historian Carol Peterson documented the history of the property for former owners David Russell and his wife Cynthia May Russell, who purchased the home in 1991 and oversaw the original restoration of the building. 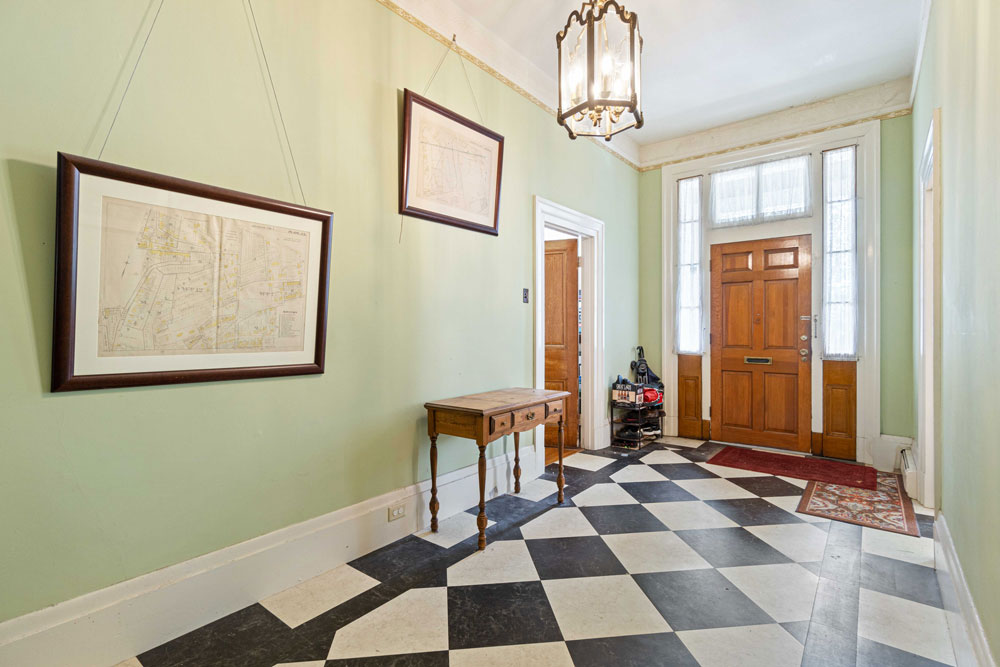 Her inventory showed the home was built between 1854 and 1858 for Adam Reineman, an active real estate speculator who, at the time, was considered one of Pittsburgh’s wealthiest residents. The home originally was part of a 44-acre tract Reineman owned in Reserve. Besides subdividing portions of this property, records show Reineman purchased 267 pieces of property and sold 783 parcels during his lifetime; Many were subdivisions of his original purchases.

At the Haslage Street home, the welcoming front porch leads to a 34-by-8-square-foot entryway, where a black-and-white checkered linoleum floor plays beautifully against the soft green walls. It is lit by a brass lantern fixture, one of the home’s many special lighting fixtures. 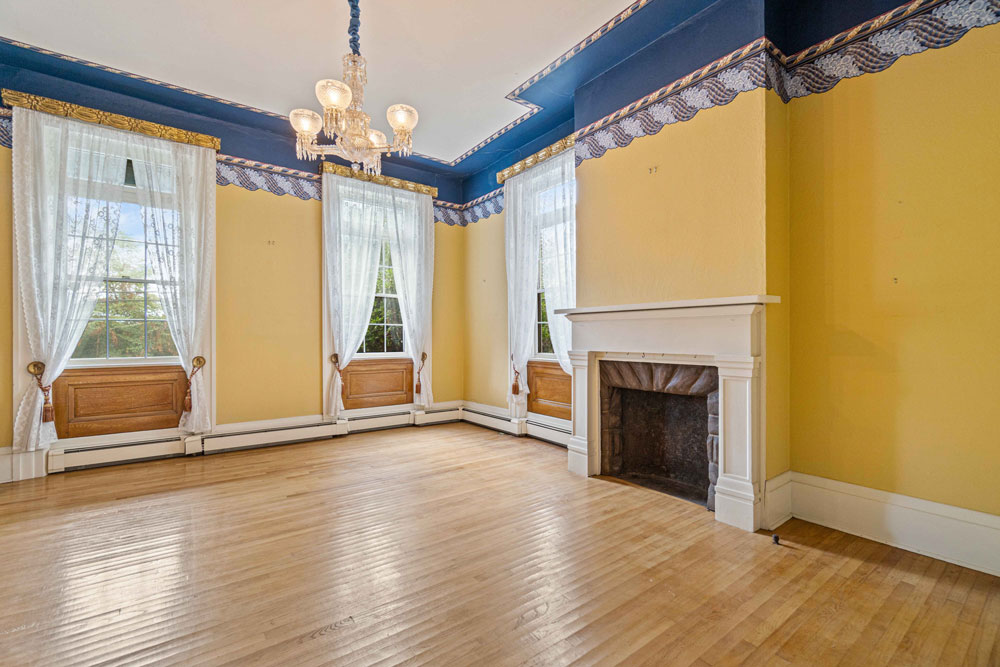 To the left of the center hall, the 16-by-15-square-foot parlor features hardwood floors, original fireplaces and a sunny disposition aided by cheerful yellow paint paired with a period-appropriate wallpaper border in shades of blue. The open-arm chandelier with glass bowls and crystals is accented by a ceiling medallion.

Through a pair of large French doors is a formal dining room of equal size that features complementary blue-and-white floral wallpaper and an even larger ceiling medallion that’s painstakingly painted in gilded golds and blues; from it hangs a tiered chandelier. 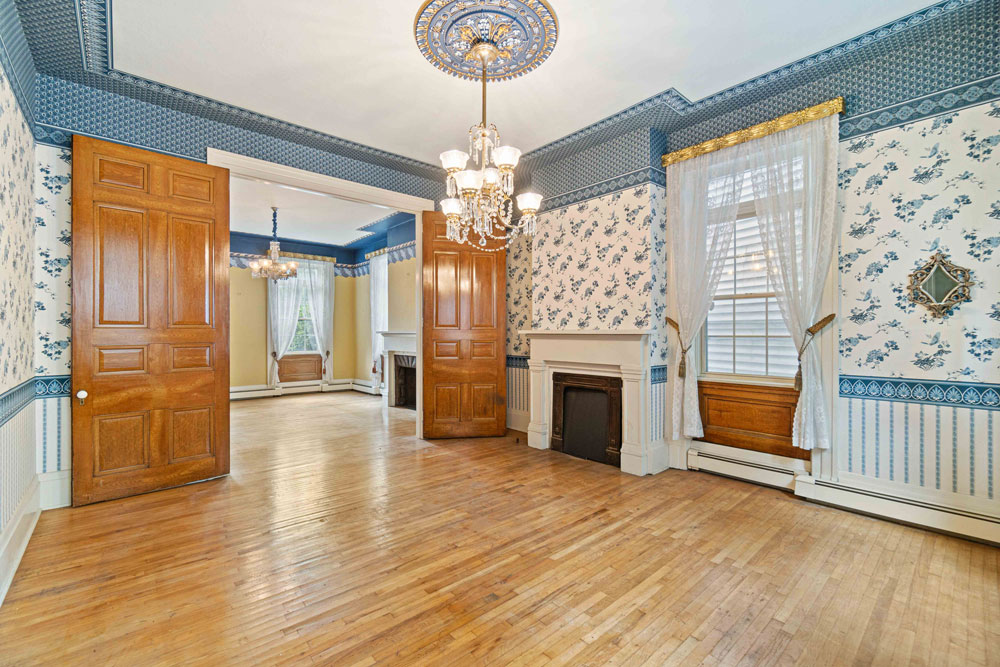 To the right of the center hall, the 17-by-15-square-foot formal living room is outfitted in red-and-white wallpaper with green accents.

The original restoration of the kitchen included a white tin ceiling decorated with scrolls and large embossed panels. LED spotlights make things bright, and an original whale chandelier was rewired and hung over the island.

The white cabinets, deep yellow-gold walls, red-tile backsplash and classic black stone countertops give the whole space a welcoming feel. Unlike when the home was built, it has modern appliances.

“When the home was built in the 1850s, it had outdoor plumbing,” Fozi says. “The kitchen was added on later.” 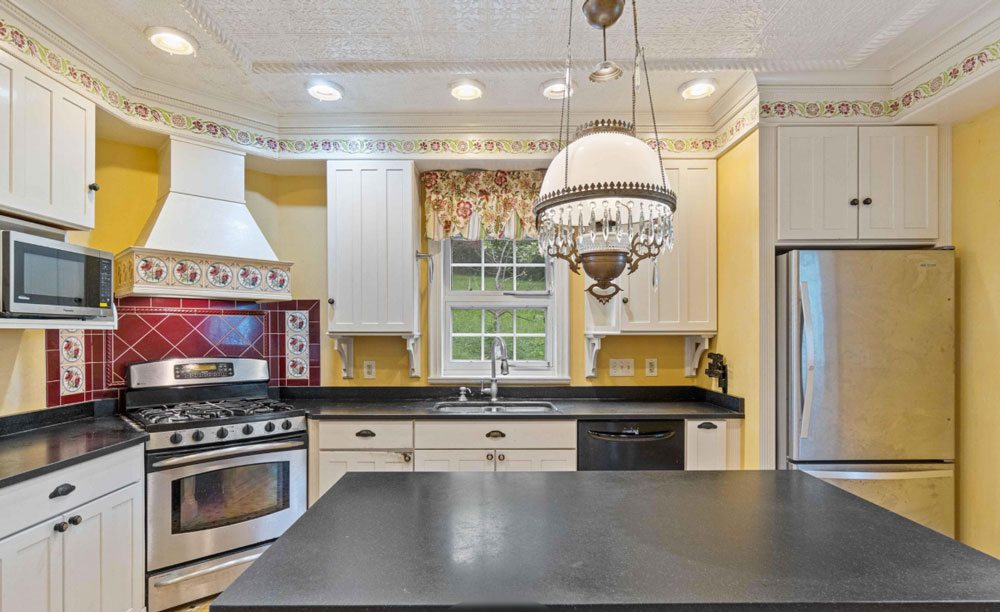 There also is a ton of storage space, thanks to the home’s original butler’s pantry. It features large, oak doors with carved pillar details, a mirrored backsplash and generous drawers. Painted a deep terracotta, it blends beautifully with an adjoining room that can be used as a breakfast space or private dining room.

That room features more era-appropriate wallpaper and a white, arched-marble fireplace topped by a large mirror. In the corner, a false wall panel door opens to a century-old room outfitted with the original wallpaper; It’s a great conversation starter. 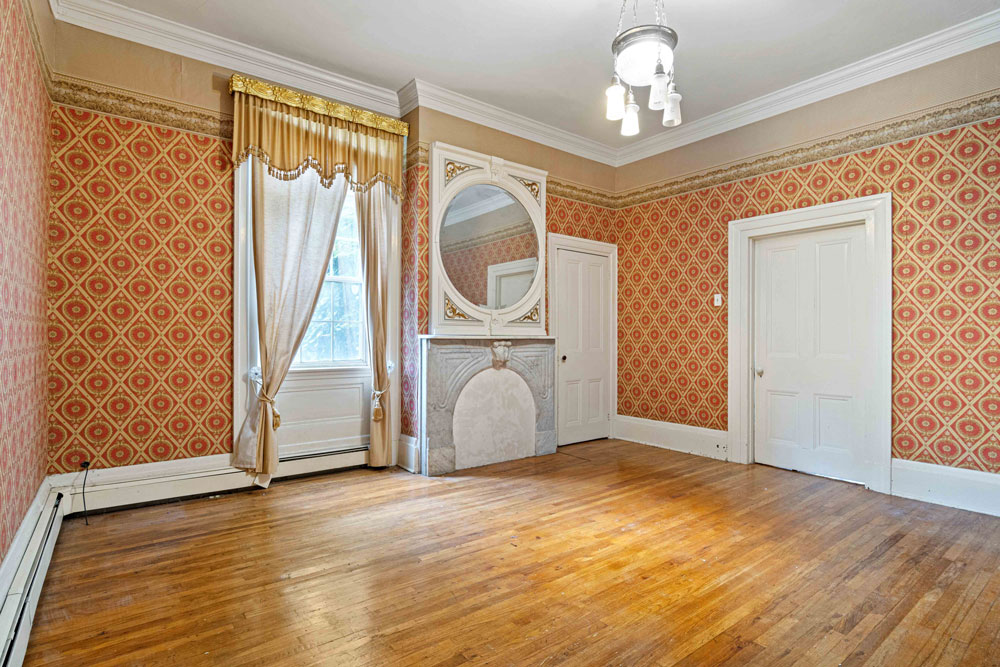 Upstairs are four bedrooms, a bathroom and a convenient laundry room. The bedrooms all measure 16-by-14 square feet, except for one that is a tad smaller. The primary bedroom has a grand fireplace with the original carved pillars, a mantel mirror and green tile surround. Some of the rooms have carpet, although a few have the restored original floors.

Interestingly, when the indoor plumbing was brought in with the kitchen, it also was run upstairs to the new bathroom and laundry.

“All of the running water in the house is in that addition,” Fozi says. “It makes it very easy if there is ever an issue.” 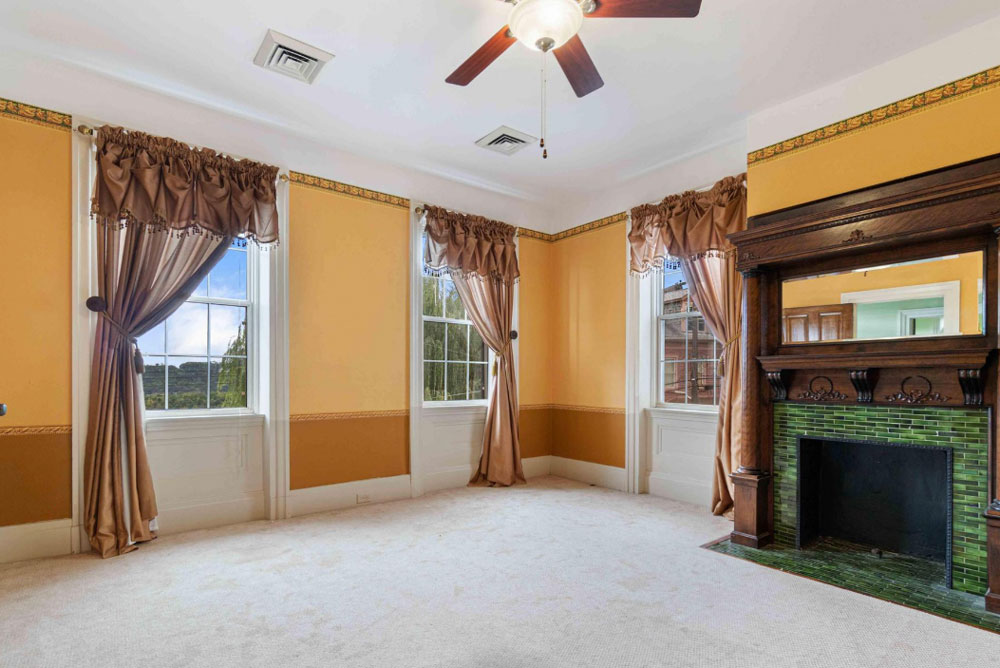 The roomy bathroom features a claw-foot tub, a separate shower and single vanity. The laundry room is enclosed, but attached to a separate smaller, utility-type room with a tin ceiling.

Featuring a tile floor and stone walls, the basement is surrounded by the original stone foundation and contains massive wood timber beams. 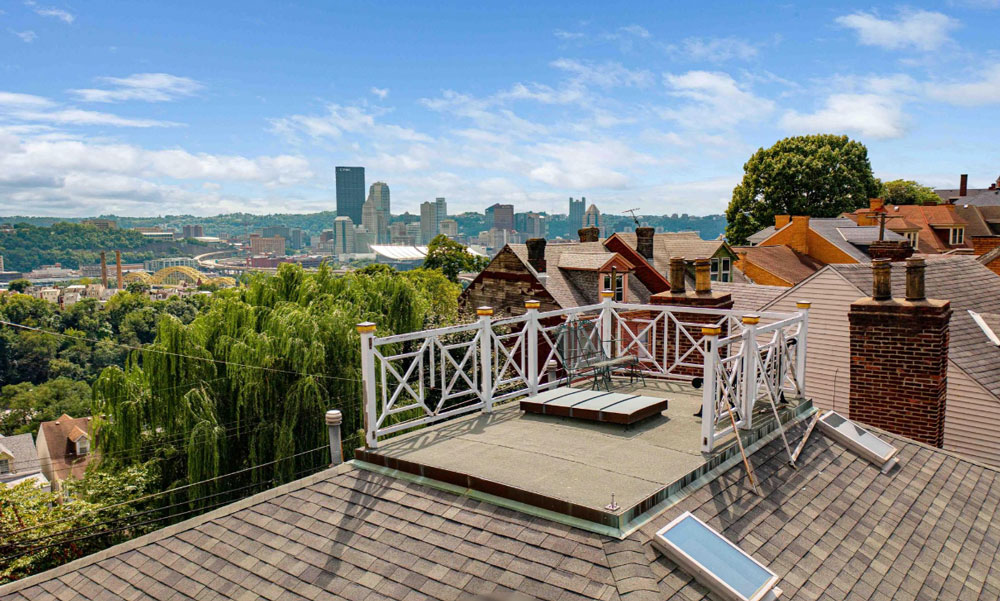 On the third floor is a cool bonus space with a ladder and hatch that leads to a rooftop observation deck offering spectacular views of Downtown’s skyline. The rear yard hosts a stone patio with remarkable plantings.

“In the wintertime, we went sledding in the backyard with the kids,” Fozi says. “There are fruit trees; We have one old and one new pear tree. Last year, I was making a pear cobbler once a week.”

There’s also a honeycrisp apple tree, blackberry bushes and two dogwood trees that bloom with white and pink buds in the spring. There are also dozens of daffodils planted throughout the property.

Fozi can’t help but get sentimental about the home.

“We will never live in a house like this again,” she says. “I am really going to miss the view.”

About: Spring Hill
Population: 2,648
Planes, Trains & Automobiles: A 30-minute commute to the airport. Daily transport via Pittsburgh Regional Transit, rideshare. On-street parking.
Schools: City of Pittsburgh (pghschools.org)
Neighborhood: Historic, eclectic and vibrant, the Pittsburgh neighborhood reached its peak residency in the 1950s. Neighborhood rejuvenation, along with a new appreciation for the city’s north hilltop neighborhoods, have helped make this a highly desired area.

An Affordable Home in Squirrel Hill? Yes, It's Possible

Hot Property: Why It's Still a Good Time to Buy a Home

The Front Porch Welcomes You Into This Mt. Lebanon Home