The Tree of Life Tragedy: One Year Later 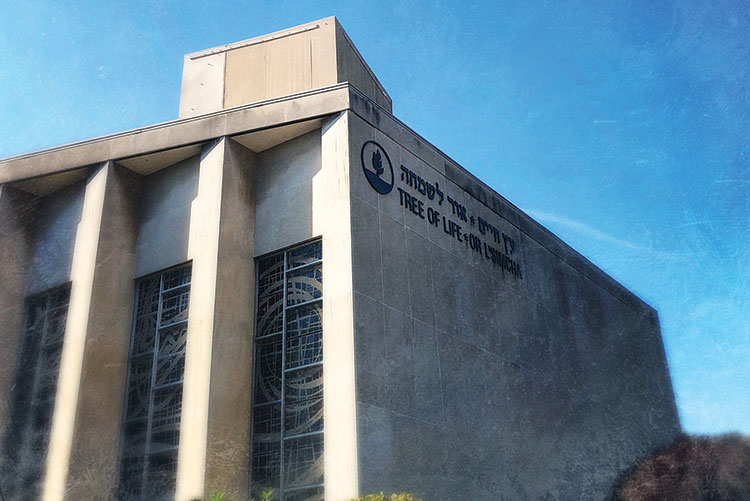 Sunday, Oct. 27, marks one year since the deadliest attack on a Jewish community in U.S. history, when a gunman killed 11 and injured six at Tree of Life or L’Simcha Congregation in Squirrel Hill.

The synagogue has been closed since the attack, but as the community moves forward with a slate of events to remember the victims, Tree of Life has announced plans to return to its property at the corner of Wilkins and Shady avenues and pledged to fight anti-Semitism and discrimination in Pittsburgh and beyond.

“We are poised to become an incredible center for Jewish life in the United States,” says Tree of Life Rabbi Hazzan Jeffrey Myers. “When we reopen, and we most certainly will, I want the entire world to say, ‘Wow. Look at what they have done.’ To do anything less disrespects the memory of our 11 martyrs.”

“We will rebuild and we will stay on-site,” says Sam Schachner, the synagogue’s president, who was voted into his position just five months before last year’s shooting. “That’s not a question in our minds. We just want to do it right. So our next steps will be to engage with individuals and organizations in the community. We are tremendously thankful for the support we’ve received. Now, we want to bring life back into the community, to show that love conquers hate.”

Before the shooting took place, the synagogue, built in 1953, was home to Tree of Life or L’Simcha Congregation, New Light Congregation and Congregation Dor Hadash. Now plans for the building include expanded space for other congregations and organizations, such as the Holocaust Center of Pittsburgh, as well as a memorial to the 11 people who died.

It’s a strategy that dovetails with Tree of Life’s current “metropolitan model,” in which the three congregations share space, expenses and programming. Since the shooting, they’ve been worshipping at Oakland’s Rodef Shalom Congregation.

The Jewish Federation of Greater Pittsburgh’s Victims of Terror Fund, which closed in March of this year, raised more than $6.3 million for victims of the attack. Of that, an independent committee disbursed almost $5.4 million in compassion payments to those most directly affected, including the victims’ families, those who suffered injuries in the attack, people trapped inside the building during the shooting, people outside the building who were named in the committee’s report and injured police officers.

Payments were divided equally based on the number of victims in each category, with $500,000 set aside for the injured police officers. The remaining $950,000 was split between providing victim support and aiding community healing. Congregation Dor Hadash and New Light Congregation each received $100,000, and Tree of Life or L’Simcha Congregation received $450,000 in recognition of its ownership of the building.

The last $300,000 was dispersed as seed money for memorial, commemoration and education efforts in the community. According to Shachner, Tree of Life continues to receive donations on a regular basis and plans to form an independent committee to determine how that money will be used.

In the immediate future, Tree of Life and the Jewish Federation are planning a day of reflection and service, culminating in a community gathering at the Soldiers & Sailors Memorial in Oakland. The official event schedule is as follows:

Community Service. The public can come together for a variety of service opportunities, from giving blood to writing thank-you notes to delivering cookies to first responders. A full list of events can be found at pittsburghoct27.org/event/community-service.

Torah Study. Participate in an afternoon of Torah study from 2 to 4 p.m. at Rodef Shalom Congregation, 4905 Fifth Ave. Topics include “How Jewish Tradition Can Help Us Grapple With Injustice,” “Remembering and Connecting With Our Loved Ones,” “Algorithms of Loving Kindness,” “Jewish Texts on How We Heal” and more. RSVP at pittsburghoct27.org/event/torah-study.

Community Gathering. A public memorial honoring the 11 community members who lost their lives in the attack, this service will take place at the Soldiers & Sailors Memorial at 4141 Fifth Ave. It will involve readings, music, prayers, remembrances and video. If indoor seating is full, the service will be broadcast on video screens outside. No registration required. A livestream will be available at livestream.com/mediaquest/pittsburghoct27
For more information, click here. (pittsburghoct27.org/event/community-gathering)

Pause With Pittsburgh. Sign up to receive a text at 5 p.m. on Sunday that will contain a video with a prayer of mourning and the names of the 11 victims, as well as a link to join Pittsburgh’s memorial service and the option to submit a message of solidarity. It’s a way for those around the world to join the community in remembrance. Sign up at pausewithpittsburgh.com.