One for the History Books: A Cathedral of Learning Proposal

This groom-to-be popped the question at new heights, potentially making him the first person to propose on top of the University of Pittsburgh’s signature structure. 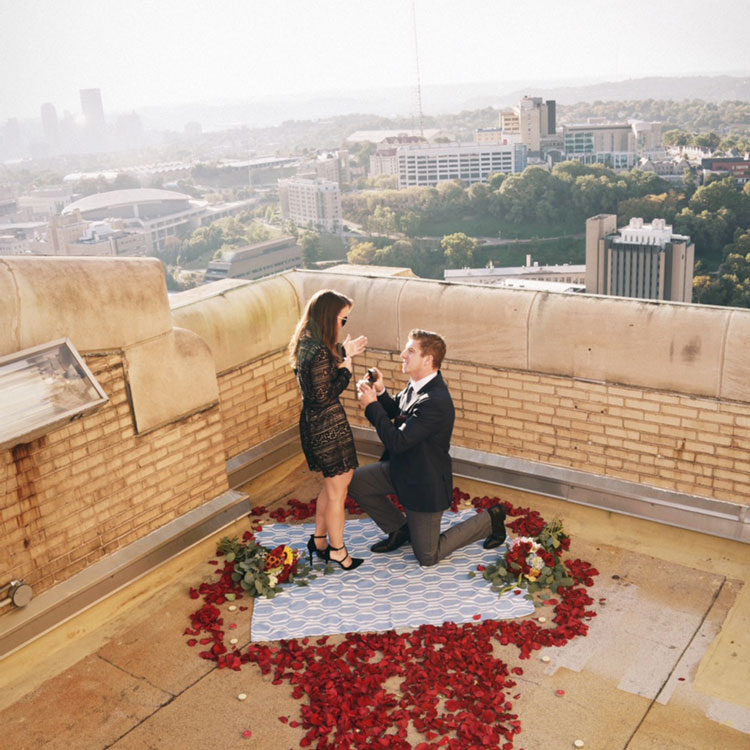 When Matt Vendeville and Kimberly Ciotti began talking about getting engaged, Kimberly emphasized that the proposal spot would have to have a view.

The Cathedral of Learning at the University of Pittsburgh (both Matt and Kimberly are graduates of Pitt’s Graduate School of Public Health) would prove to be the perfect spot.

“We met at Pitt, it’s where our relationship blossomed,” Matt says. “It grew throughout the whole city, and I wanted something that showed that part of our story.”

Matt and Kimberly met at a social that the graduate school was hosting in January 2016, and they have been together ever since. After Matt got the idea to propose on top of the cathedral, it was all about getting a team of people together to make it happen, because as far as Matt knows, no one had ever done it before.

Matt started by approaching Chancellor Patrick Gallagher, whom he had met before, at a football game and asking him if the proposal would be possible. The chancellor referred Matt to a member of his staff who could help, and from then it was all about coordinating the logistics of the proposal, since public access to the top of the cathedral is restricted. Phil Hieber, who works in facilities management at Pitt, became crucial in securing access to the cathedral. 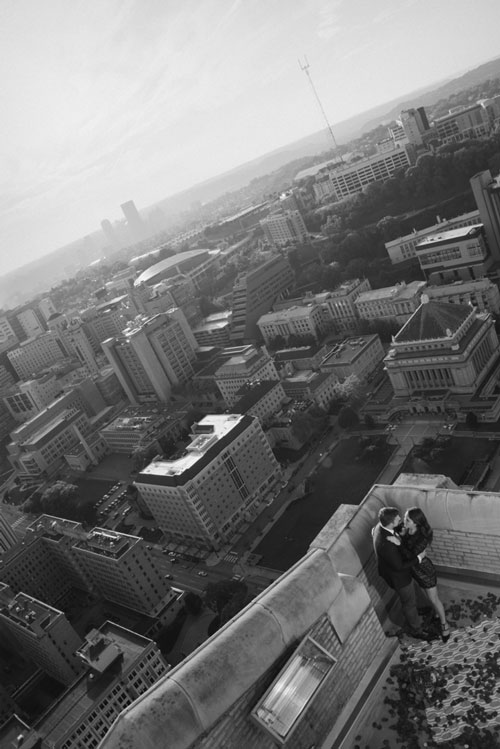 Once the idea was approved, Matt put an elaborate plan into place to surprise Kimberly. One of Matt’s mentors sent him a fake invitation to attend a charity gala in the student union, which served as a way for the couple to get dressed up for the proposal without it being suspicious. When Matt and Kimberly arrived, there was no gala in the student union, and Matt called his mentor in a pretend panic; his mentor told him that the gala had been moved to the cathedral.

Matt and Kimberly arrived at the cathedral to find a fake invitation list with their names on it. Hieber was there to take them up to the “event” at the top of the cathedral, leading them on a roundabout route to get to their destination.

When the couple reached the top of the cathedral, they turned a corner and Kimberly saw roses had been set up with a view overlooking the city. Matt, his sister Cara, and Kimberly’s best friend Megan Nicely all helped with the setup.

Of course, Kimberly said yes, and all of Matt’s efforts paid off.

“She usually catches my in my surprises,” Matt says. “I was really glad she didn’t this time.”