New Venue Added to Pittsburgh's Cinema in the Park Series

See what's playing this summer in a Pittsburgh park near you. 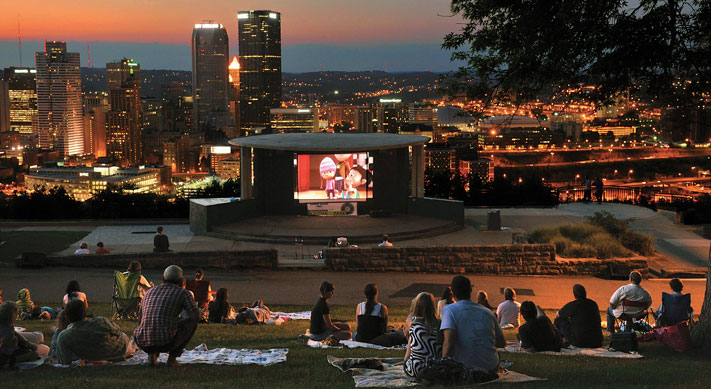 Anyone who has been to a Drive-In knows that a blockbuster under the stars is a great way to spend a summer evening. Thanks to the city’s annual Cinema in the Park series, you can even get the experience without a car. (And without paying for tickets.)

The schedule for the annual series of outdoor screenings has just been released, detailing the lineups for nine locations throughout the city. That tally includes a new venue for 2018: McBride Park in Lincoln Place.

Seven of the Cinema in the Park venues — Schenley Plaza, Highland Park, the Elliott Overlook in the West End, Brookline Memorial Park, Arsenal Park, Grandview Park on Mount Washington and McBride — focus on recent family-friendly hits. Highlights include the Oscar-winning “Coco,” Disney adventure “A Wrinkle in Time, the crowd-pleasing “Despicable Me 3” and the charming stop-motion animation “Early Man.”

The remaining two parks feature slightly more grown-up fare (although all features bear ratings no harsher than PG-13). At Riverview Park and Flagstaff Hill, the lineup will include superhero hits such as “Black Panther,” “Wonder Woman,” “Thor: Ragnarok” and “Spider-Man: Homecoming,” as well as ’80s favorites “Ferris Bueller’s Day Off” and “Dirty Dancing.”

Those two venues also include a trio of films presented as part of the Spark! Film Series, intended to provoke cross-cultural dialogue.

The full schedule of films and times is available now on the city’s events webpage. It’s also not a bad idea to keep an eye on that office’s Twitter and Facebook accounts, where inclement-weather cancellations will be posted.