Goodman inherits the challenge of overseeing the care of more than 8,000 creatures and improving the 77-acre facility in Highland Park. 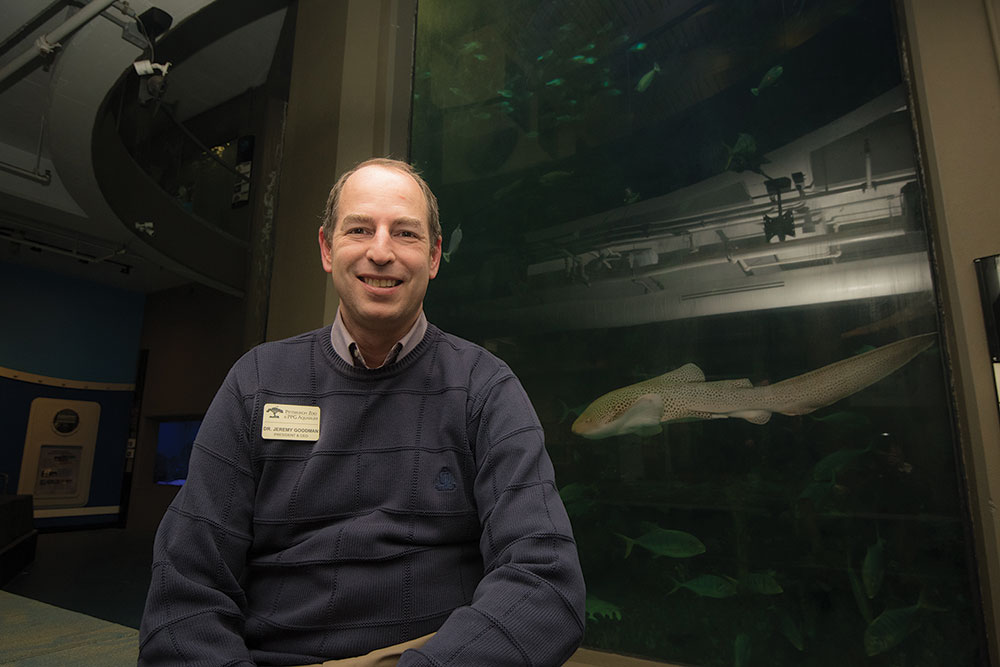 Dr. Jeremy Goodman seems to be that rare ornithological creature: both night owl and early bird. It’s a helpful combination of traits for someone tasked with running the 124-year-old Pittsburgh Zoo & PPG Aquarium.

“He is a workaholic,” says Ron Patalano, deputy director of operations at the Roger Williams Park Zoo in Providence, Rhode Island, where Goodman served as executive director for eight years. Goodman began the job as president and CEO of Pittsburgh’s zoo in early October.

“There were times I was sending out emails at 4:30, 5 o’clock in the morning, not expecting to get an answer [right away]. Lo and behold, within a few minutes I’d be getting an email back,” Patalano says.

Animal similes aside, Goodman, 51, has to be fast on his feet in adapting to a new, larger environment. His predecessor, Dr. Barbara Baker, retired after 31 years last summer (but will serve as president emeritus until the end of 2022).

Goodman inherits the challenge of overseeing the care of more than 8,000 creatures and improving the 77-acre facility in Highland Park, as well as managing the 1,000-acre International Conservation Center in Somerset County that focuses on the zoo’s African elephant breeding program. His former home, Roger Williams Park Zoo — the nation’s third oldest — has 800 animals on 40 acres.

He’s been on the run since arriving in Pittsburgh. In addition to meeting with staff, supporters, the zoo board, the media and City of Pittsburgh officials, he’s been dealing with the budget, union negotiations for a new collective bargaining agreement, working on some of the  newer animal programs and reviewing the breeding programs.

“So it’s a little bit of everything,” he says. “What I love about this job is that it’s never ‘normal.’”

There’s been a learning curve, in some ways as steep as the pathways around One Wild Place. Goodman was renowned for his forward-thinking capital improvements in Providence; that zoo last year completed the first part of an ambitious 20-year master plan. The showcase was the opening of a “Faces of the Rainforest” exhibit.

His vision for Pittsburgh will be tempered by what he learns about his new home. “It’s not my zoo; it’s the community’s zoo,” he says. “I want to understand what the community wants and needs. I don’t make assumptions of, ‘this will work for me here because it has worked elsewhere.’”

He will start surveying and meeting with stakeholders, politicians, foundations, local businesses and visitors. “I want to develop a plan that will have everybody’s buy-in, where we can move forward as the staff, as the board, as the community, building something.”

That is classic Goodman, Patalano says. “He is very thorough, and I will tell you this: Jeremy will be out there learning until he figures it all out.”

“Dr. Goodman is an accomplished gamechanger in the advancement of city zoos and has a track record of success to bring to Pittsburgh’s unique combination zoo and aquarium,” Donna Hudson, Zoological Society of Pittsburgh board chair, said in a statement. 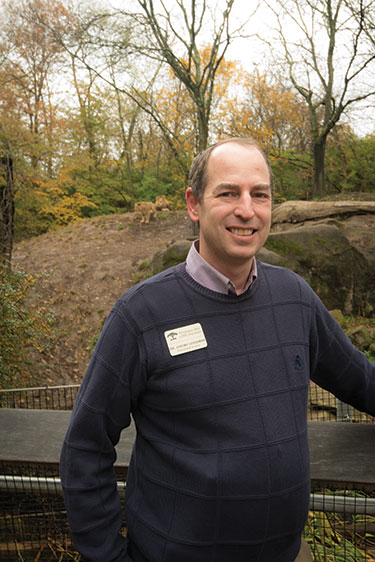 Like so many other public venues, Pittsburgh’s zoo was hit hard by the pandemic. A third of the staff of 140 full-time employees was furloughed in April 2020 when COVID-19 began its spread through the community. All cultural institutions were greatly affected, but “zoos really got hammered,” Goodman says.

When the theater doors are closed, you can walk away from it. With a zoo, you still have to feed the animals.

A fiscally cautious 2020 helped maintain financial reserves. “Fortunately,” Goodman says, “being a mostly outdoor facility, and with the people’s desire to get back out there once they felt a little more comfortable, and their ability to get vaccinated, we’ve bounced back nicely this year … This was almost a normal year for us.”

Staffing remains a challenge and not just for peak daylight hours. Like other major zoos, Pittsburgh attracts visitors at nights and off-hours through events such as the Asian Lantern Festival, Zoo Lights Drive-Thru, weddings, birthday parties and college reunions.

The zoo also has come under scrutiny with safety concerns in recent years. In 2012, a Pleasant Hills toddler was mauled to death when he fell into an African painted dogs enclosure. In 2002, a handler died after being pinned by a 20-year-old mother elephant during a regular morning walk around the zoo.

In 2017, a premature elephant calf had to be euthanized after it failed to thrive in its early months. Animal rights groups have been critical.

Goodman says he is well aware of these issues and that he believes in research. What do visitors think of the zoo? A study of surveys over the past 20 years offers some insight.

“We have a lot of information about trends and favorability,” he says. “The number of haters, that hasn’t changed at all; it’s the same [8-10]%. It’s just that that average person has questioned a bit more. That’s gone up.

“But there is nothing wrong with questioning. We should be questioning ourselves, to be getting better.”

Zoos should evolve, Goodman says. “It’s good to push the envelope … [For example], what was acceptable for a cage size for a lion [50, 60 years ago] is not what we do now.”

Among Goodman’s more immediate priorities is having the zoo re-accredited by the Association of Zoos & Aquariums.

The zoo leases land from the city. That lease mandates it must be AZA accredited. Baker in 2015 ended the AZA membership because she disagreed about an AZA safety policy at the time that limited unprotected contact between elephants and handlers.

The Pittsburgh Zoo & PPG Aquarium has accreditation from other organizations, which is great, Goodman says. But the AZA has particularly high standards. Beyond animal care and veterinary care, “the AZA looks at your finances; are you financially stable? As well as patient programs, conservation work, the quality of items in your gift shop. Is your food up to par? No stone goes unturned.”

Goodman — who is a member of the AZA program management committee — says the AZA application might well include the zoo and African elephant breeding program in Somerset County, which would require it to meet the strict elephant handling policies.

It is not a stretch to say Goodman is living a lifelong dream. From the time he could walk, he was fascinated by animals. “If you asked my parents, they would say I was 2 when I said I wanted to run a zoo. That’s all I ever wanted.”

He was that outdoors kid — collecting turtles, frogs and snakes growing up in Parsippany, New Jersey. Much of it was catch-and-release, but a few of the creatures came home. There were also more conventional pets: gerbils, chinchillas, birds, hermit crabs. But no dogs or cats.

No surprise then, that over the years, more than one person has gifted him copies of Dr. Seuss’ “If I Ran the Zoo.”

After earning a degree in animal science from Rutgers University, Goodman obtained his doctorate of veterinary medicine at the Cummings School of Veterinary Medicine at Tufts University. The plan was to be a zoo vet “until my body wouldn’t let me anymore” due to the extreme physical demands of the job. But opportunity presented itself not long after he began working as a vet and assistant director at the Potawatomi Zoo in South Bend, Indiana.

“As luck would have it, a director job opened up at the [Turtle Back] Zoo I grew up in New Jersey … it just sort of accelerated plans a bit more.”

After nine years at Turtle Back, he was hired by Roger Williams Park Zoo, where he enacted bigger changes. Branding a zoo goes beyond attracting people or teaching them about conserving the animals. Roger Williams Park Zoo grew through well-considered chances; for example, taking over the commission of a nearby carousel, which created a new revenue stream. Establishing a train ride for kids and food truck nights also proved popular.

“I’m the type of person who really puts my heart and soul into everything,” he says of both tenures at Turtle Back and Roger Williams Park. “At Roger Williams, I loved the staff there, they were just the best people in the world, and leaving them was very difficult … The good thing is, I knew I left the zoo in a much, much better place when I found it, and they are financially secure.”

As an Orthodox Jew, he says his faith inspires his work. “Saving animals for the sake of biodiversity and preserving nature are incredibly important things. When you also view it as helping preserve God’s world, it helps to even further elevate the importance of the work I do.

“I never project my beliefs on others I work with; they are very personal and help to motivate me. My faith also teaches me to be kind, fair and honest, which are all important traits for a leader.”

His family — wife Marina, sons David and Jack and a daughter, Dina — joined him at their new house in Squirrel Hill in December. He’s still learning the mysteries of Pittsburgh roads. “You’re on one road and you think you’re still on it and then you are off it, so it makes no sense,” he says, laughing.

The natural world and the creatures in it leave him in awe, Goodman says. But he can’t play favorites. At Roger Williams Park Zoo, everyone wore name tags that declared “My Favorite Animal Is…

“It was a nice conversation starter,” Goodman says. His merely read: “A Happy and Healthy One.”

Maria Sciullo is a Pittsburgh journalist who has written about everything from football to film and television criticism. Her favorite animal is whatever sighthound is snuggling next to her on the couch.