Brought together through music, these couples incorporated that passion into their special days. 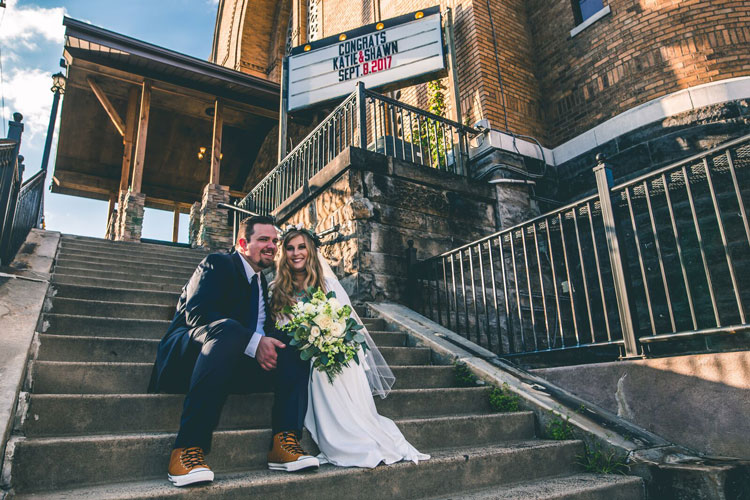 On a Friday morning in 2015, Katie was listening to WDVE in her car when she heard Paul Luc’s music for the very first time. She learned that he was playing at the Strip District Music Fest the next day, and Katie decided to get some of her friends together to go. They heard a lineup of musicians, including Clinton Clegg from a new band called The Commonheart.

About a week later, The Commonheart was having their premier show, and that’s where Katie first saw their drummer, Shawn McGregor, when she yelled out, “Awesome job,” in his direction. But it wasn’t until a few days later that they met. She was attending Harris Grill’s annual Groundhog’s Day party when she saw Shawn and Clinton and waved, so the men walked over.

“We spent the whole night talking to each other,” says Katie. 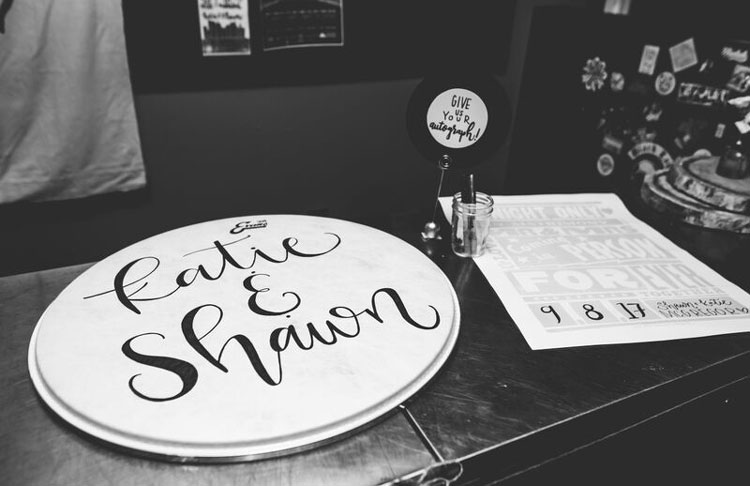 They connected with each other through Facebook, and Shawn reached out to Katie to make sure she purchased tickets to his upcoming show at The Pittsburgh Winery, since there were only a few left.

On the day of the show, Shawn saw Katie walk in, and he sat with her and her friends before the show started, making them laugh the whole time.

The next day was Valentine’s Day, and Katie’s old boss was playing a show at The Pittsburgh Winery. Katie volunteered to help sell merchandise for the show, and Shawn wanted to tag along. After getting him on the guest list, Katie and Shawn had a perfect night where they truly felt they were brought together through music, something that was important for the both of them growing up. 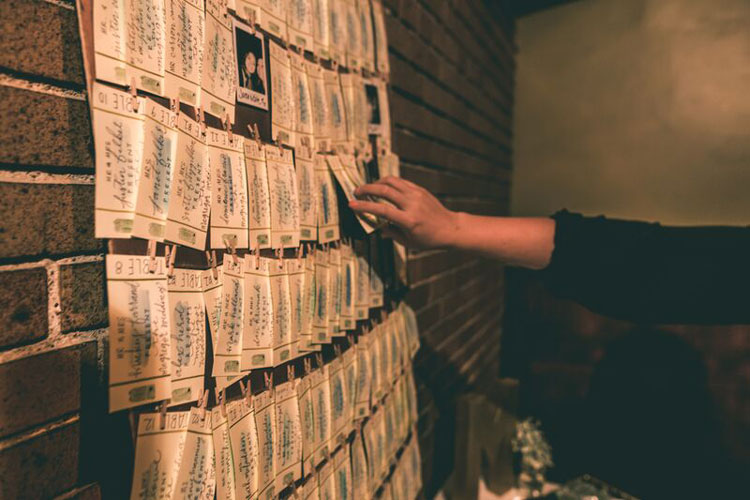 During an online search for a venue, Katie and Shawn stumbled upon a familiar place they almost didn’t recognize at first: Mr. Smalls Theatre. Shawn has performed there many times, and they had both been there often as concert-goers, but it was decorated for a wedding much differently than they had seen it for concerts.

“We saw it and thought, ‘That’s it,’” says Katie. Getting a date was a bit challenging for them since they had to work around performances at the theatre, but they managed to get a one in September 2017. 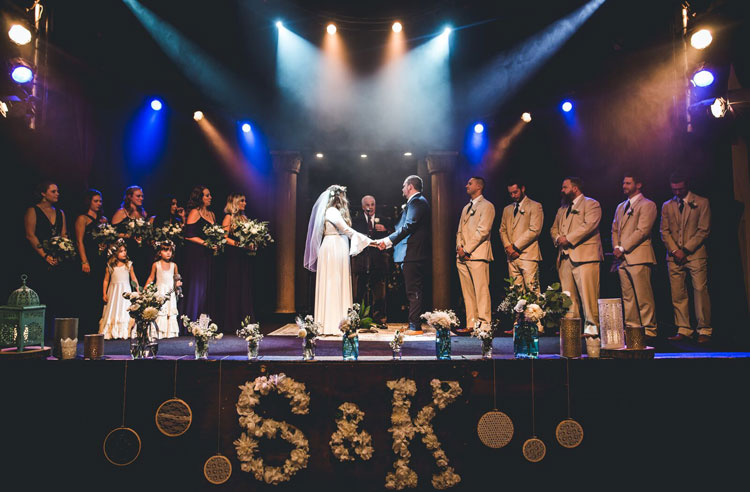 The ceremony itself was short, but both Katie and Shawn wanted their wedding guests to feel as if they were at a concert. When guests arrived, they found their seats on a board with concert ticket stubs. Shawn’s bandmate Mike DeLuca sang during the ceremony, City Dwelling Nature Seekers played during the cocktail hour, Bill Deasy of The Gathering Field sang the first dance song and other local musicians played during the reception.

Still playing off the music theme, the couple replaced traditional wedding favors and created their own “wedding merch booth.” Here guests could pick from stickers made by Commonwealth Press and pins with designs of things they love, like pierogies. As a guest book, Katie and Shawn used a drum head and a poster that looked like a band’s poster.

“Nothing was done because we felt like we needed to,” says Katie. “It was all us.” 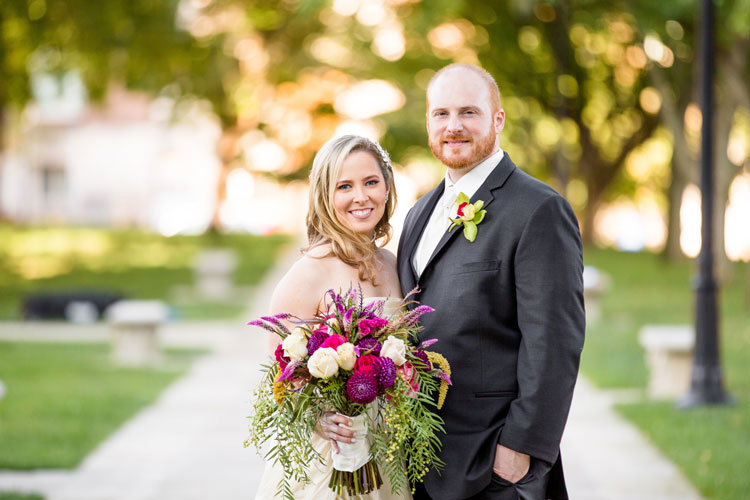 In the era of MySpace back in 2006, Bethany Berkstresser saw a post that a band named Federali was looking to audition singers. Bethany responded to the post and traveled to the South Side Slopes where the band practiced in a storage unit.

“I went to try out there, and I was like, ‘I’m either going to get murdered or this is going to be a great band,’” says Bethany.

It was through this band that Bethany met Phillip Conley, but it wasn’t love at first sight, as Bethany was already in a relationship and the two didn’t really interact outside of the band.

After the band split, Bethany went to sing with a different band while Phil and another bandmate from Federali started a new project, Balloon Ride Fantasy. 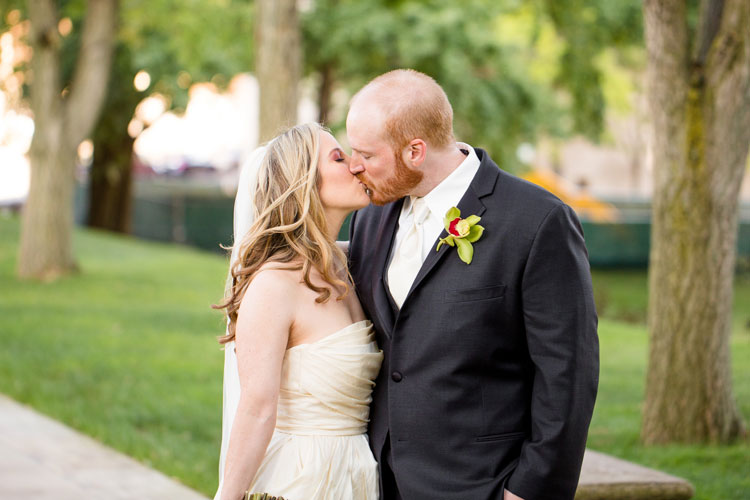 While working together this time, Phil and Bethany started talking more, mostly about music, which led to them hanging out outside of rehearsal, and they just clicked.

“We probably got a little older and less dumb,” says Bethany while laughing.

At the wedding in September 2017, Bethany wanted something musically that hadn’t really been done before. After looking online, she didn’t find anyone else who had used a guitar as a card box, which inspired her to use one at hers.

Using her love of restoring furniture, Bethany found a broken guitar on Craigslist. She had to bolt the head of the guitar back to the body, sand all of the previous paint off, spray paint it gold and, with the help of a friend, precisely cut a hole in the top for cards. 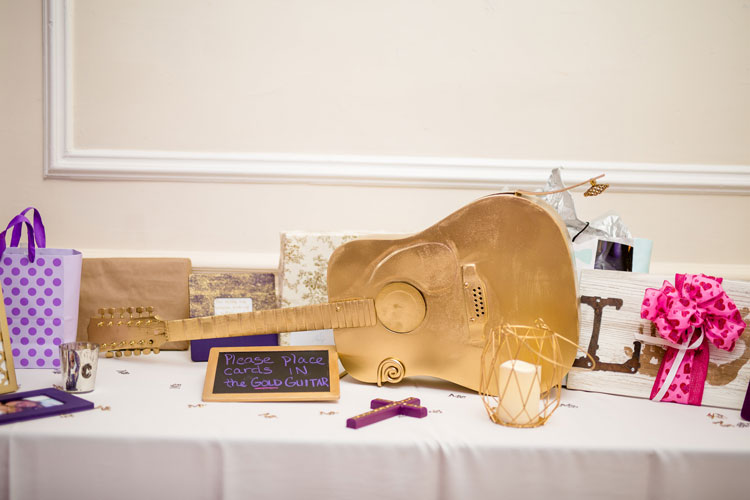 To continue the theme, Bethany made the playlist for the reception, and the favors were chocolate music notes Phil’s mother made. Their bandmates were groomsmen in the wedding.

“It was a labor of love,” says Bethany. 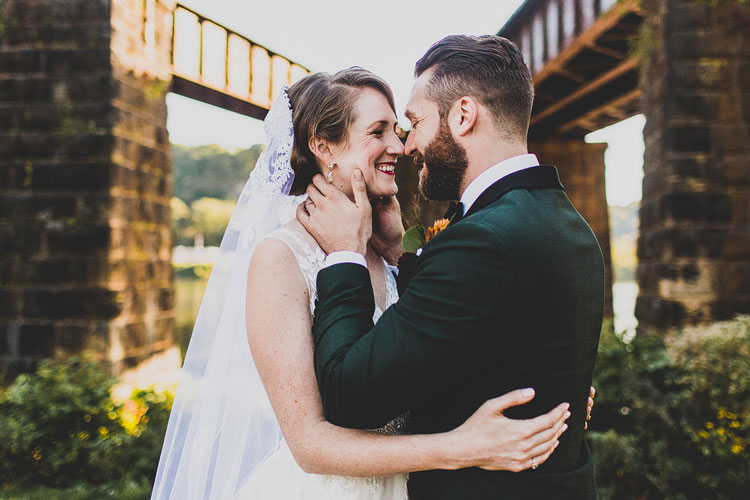 After graduating from the University of Pittsburgh, Katie Kurtzman moved to New York City. But one weekend, she was back in town visiting friends and attended the Head and the Heart concert at Stage AE.

Adam Longshore, who’s originally from Alabama, was invited to the concert last minute when a friend had an extra ticket. That friend ended up knowing one of Katie’s friends, and they introduced the two on that night in May 2014.

“We hit it off that night, and we both love that band,” says Katie.

“By ‘hit it off,’ she meant slyly rubbing my arm during the concert with her arm,” says Adam laughing. “I saw what she was doing.” 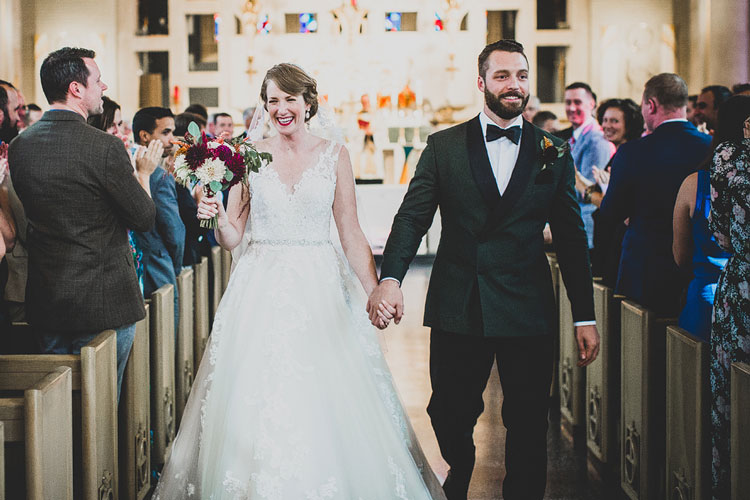 The two connected on Facebook, then ended up texting and talking on the phone; their shared love for music, as well as 80s television shows, brought them closer together.

Just a few months later in September, Katie asked Adam to come to New York City for a Gary Clark Jr. concert in Central Park. After that, the couple started dating long distance until Katie decided to move back to Pittsburgh. While they were apart, Adam would record videos of himself playing the guitar and singing, and Katie would listen to them on her way to work.

The couple still goes to many concerts, ranging from small to large venues and all different kinds of genres. They collect records, and Adam plays the guitar. Their entrance song at their reception on Sept. 30 was “So Fresh, So Clean” by OutKast, and their first dance song was “The Air That I Breathe” by The Hollies.

“[Music] is something that brought us together, but it is also in our house and in our lives,” says Katie.

“We both think of music as a little backdrop, and we both enjoy the same backdrop,” says Adam.