Netflix's new musical is a '90s throwback that feels stuck in its era. 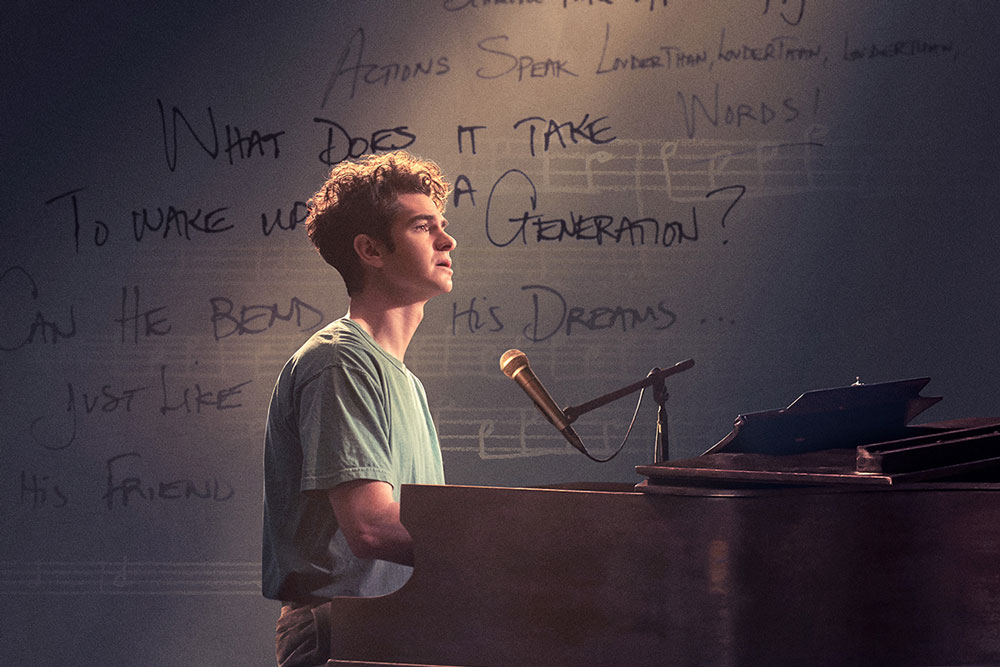 I’m often left cold by a story about a story.

While many great films have been made about the travails of artists, the narrow subset of movies that are specifically about the making of a different great work often feel like supplementary material. Think of last year’s “Mank,” a movie I’m sure you’ve already forgotten; to me, a movie about “Citizen Kane” can never be as interesting as … well, “Citizen Kane.”

“tick, tick … BOOM!,” a movie I will try not to penalize for its grammatically absurd title, is in fact a musical about two other musicals. It is a personal, self-analytical piece by the late composer Jonathan Larson — played well by Andrew Garfield — about the process of taking his first big swing at a hit musical. Inevitably, though, it’s also about Larson’s eventual breakthrough, “Rent,” which shows up in the film’s beginning and ending — and looms over the proceedings, as we see how the writer’s life informed his great work.

So it’s about “Rent,” and it’s about Larson’s unproduced opus (which is called “SUPERBIA,” by the way, another clunky title).

The film, the directorial debut of Lin-Manuel Miranda, follows Larson as he attempts to gain attention — and, admittedly, subsequent fame and fortune — for “SUPERBIA.” By the numbers, it’s a fairly standard struggling-artist tale: friends are alienated, bills go unpaid, hurdles present themselves. The endorsement of a personal hero is bestowed (Larson was championed by Stephen Sondheim, played here by Bradley Whitford).

In style, Miranda takes things back to the confessional, melodramatic-cabaret style popular in late-’90s avant-garde musicals. Much of the film takes place at a performance of … well, “tick, tick … BOOM!,” in its workshop format, with Larson relaying his own stories with the help of a cadre of musicians and singers. A few songs are quite good, while others feel like first-draft songwriter stuff.

Miranda was both reverent and wise in deciding not to stylistically update the show; it feels like something out of 1995. There was no other choice — a time jump absolutely would not have worked — but it highlights what a fish-out-of-water this show is. It’s an artist from a bygone era talking about living an antiquated lifestyle in pursuit of the kind of art no one makes anymore, told as though the intervening decades never happened.

Even with that being the case, the subject matter gets a bit of a head start for me; I was a teenager taking theater classes when “Rent” took over the world of drama, and the untimely death of Larson before the show’s opening gave him a tragic, almost mythic place in my mind. Even with that inherent interest, though, I’m not convinced that “tick, tick … BOOM!” needed to be made. If you can’t sell it to me, good luck with anyone who didn’t own more than one “Rent” T-shirt.