The spoof of Nicolas Cage's persona is exactly what you think it is, weirdness and all. 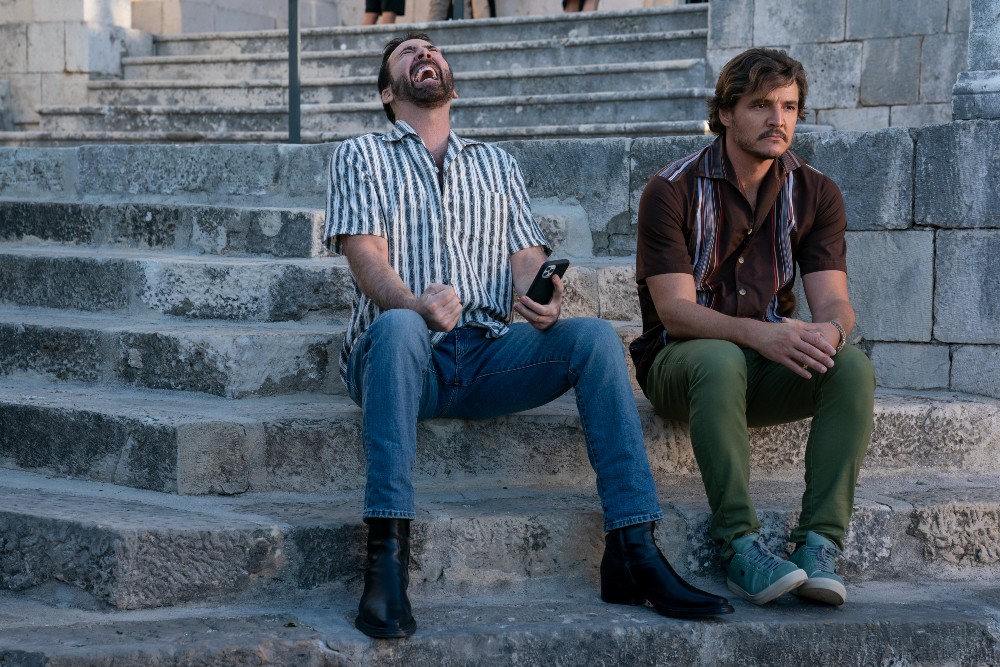 In “The Unbearable Weight of Massive Talent,” Nicolas Cage plays an elevated (or perhaps merely streamlined) version of himself. It’s Nic Cage playing Nic Cage in a movie about Nic Cage.

That oddly surface-level recursion is the mission of “Massive Talent,” the sort of skin-deep metatextual filmmaking that aims to be no more than what it is: A curiosity. Those hoping for a gonzo freakout on par with the most out-there corners of the Cage filmography should be forewarned: This is no “Mandy,” nor even a “Face/Off,” but a palatable simulacram of a broad action comedy.

It just happens to be about Nicolas Cage, who stars as Nicolas Cage. (Or is it the other way around? Don’t think about it too hard.)

The liveliest scenes in the film are those in which Cage interacts with a younger, “Wild at Heart” costumed version of himself; the digitally de-aged version of the star serves as a devil on the shoulder of the aging Cage, pushing him toward the kind of hijinks and bravado that have become a part of his meme-generating persona. These Cage-on-Cage arguments hint at the more ambitious and weird film that might’ve been.

That’s not to suggest that the film we do have is disappointing; it’s exactly as good as you’d suspect. It works well enough and certainly qualifies as entertaining. The dynamic between Cage and Pascal, particularly, is excellent. It’s a fitting tribute to the over-the-top action flicks that its star was known for in the 1990s; it’s no “Con Air,” but it absolutely took notes from “Con Air.”

Oddly, my main takeaway is that Cage is, if anything, underused. “Massive Talent” reminds us that his presence is so bizarre and compelling that relegating him mostly to the bargain bin is a crime; while he’s given great performances lately (including last year’s gripping turn in “Pig”), there’s not enough Nicolas Cage in mainstream cinema — even with quite a few of him present in this particular blockbuster.

Now, for a sequel, let’s do the same thing with Dolly Parton. Have her fend off terrorists inside Dollywood. That’s a guaranteed hit.

“The Unbearable Weight of Massive Talent” is now playing in theaters.