A much older Leatherface returns in a much less savvy latter-day sequel to the 1974 classic. 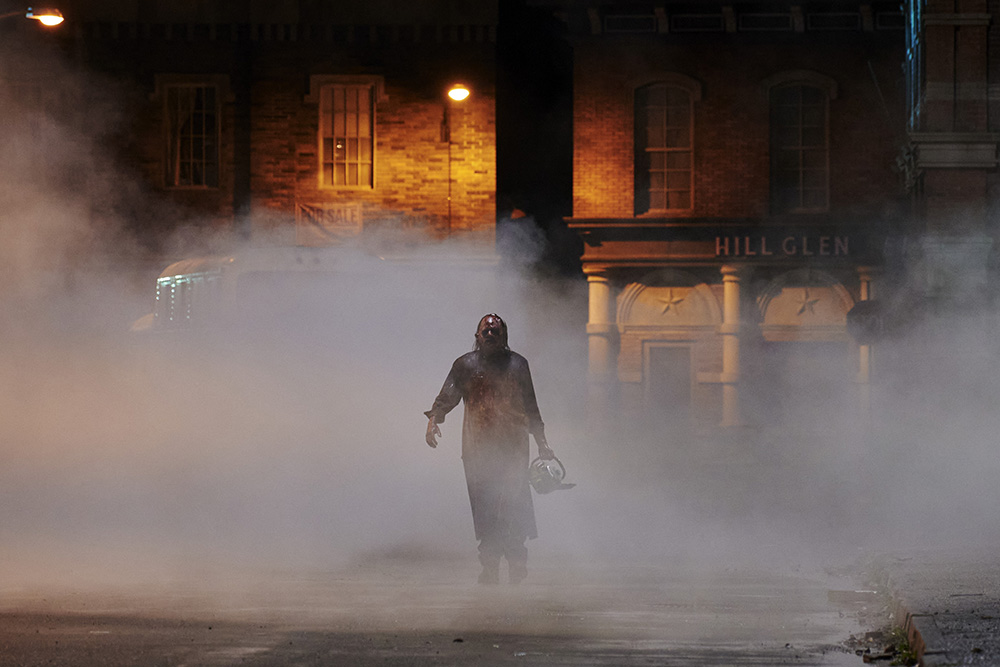 Much like his fellow horror icons Michael Myers and Candyman, Texan murderer/cannibal Leatherface is ready for a soft reboot.

As was the case in the 2018 “Halloween” and the 2021 “Candyman,” the filmmakers behind Netflix’s new “Texas Chainsaw Massacre” have declared all films other than the original classic, from 1974, null and void. This new flick is presented as a direct sequel to Tobe Hooper’s low-budget proto-slasher, positing that Leatherface ended up living in an orphanage for the better part of 50 years — during which time he presumably kept the massacres to a minimum.

Wouldn’t that make the hulking killer above retirement age? Well, yes. But he’s taken remarkably good care of himself and can still swing just about any blunt or bladed instrument with remarkable force.

He’ll need those skills, as there’s a new group of young city folk in town. Hipsters Dante (Jacob Latimore) and Melody (Sarah Yarkin) have bought up all the land in a mostly abandoned small town, and they’re hoping to turn it into a haven for artisanal types. They trek out to the town, dragging Melody’s sister (Elsie Fisher) and Dante’s girlfriend (Jessica Allain) along for the ride, meeting skeptical police officers and a gruff contractor en route.

Unfortunately, a much larger problem is waiting. There’s been a mix-up with one property: the former orphanage where the senior Leatherface (Mark Burnham) lives with an elderly caretaker. Things go south, the big guy starts cutting and we’re off to the races.

For an 83-minute movie, writers Chris Thomas Devlin (screenplay), Fede Álvarez and Rodo Sayagues (story) try to pack in … well, far too much. There’s the fetishization and commodification of small-town life, post-traumatic stress, school shootings, race relations, the housing crisis, police brutality — but aren’t we fundamentally here to watch a big guy run a chainsaw through some people?

Those toe-dips into relevance range from well-meaning-but-feeble to downright exploitative. Of particular concern is the arc reserved for Fisher’s character, Lila; the survivor of a prior killing spree, she repeatedly flashes back to the last time she was drenched in blood in jarring departures from the main plot. Rather than treat this material either sensitively or realistically, though, it’s merely a stumbling block for an ascendant final girl; by the last reel, she’ll be toting shotguns and sneering at Leatherface.

“Texas Chainsaw Massacre” has moments of visual flair — there’s an indelible shot of a freshly masked Leatherface rising out of a sea of dead sunflowers — thanks to director David Blue Garcia, whose inventive setups for the film’s violence will satisfy gore hounds. The general public, though, should steer well clear; there’s not nearly enough here to outweigh the burden of bad ideas and poor taste.

If nothing else: They filmed it in Bulgaria. I’m all for finding convenient and affordable filming locations, but it’s not called the Bulgaria Chainsaw Massacre.