Florence Pugh shines, but this thriller is as messy onscreen as it is off. 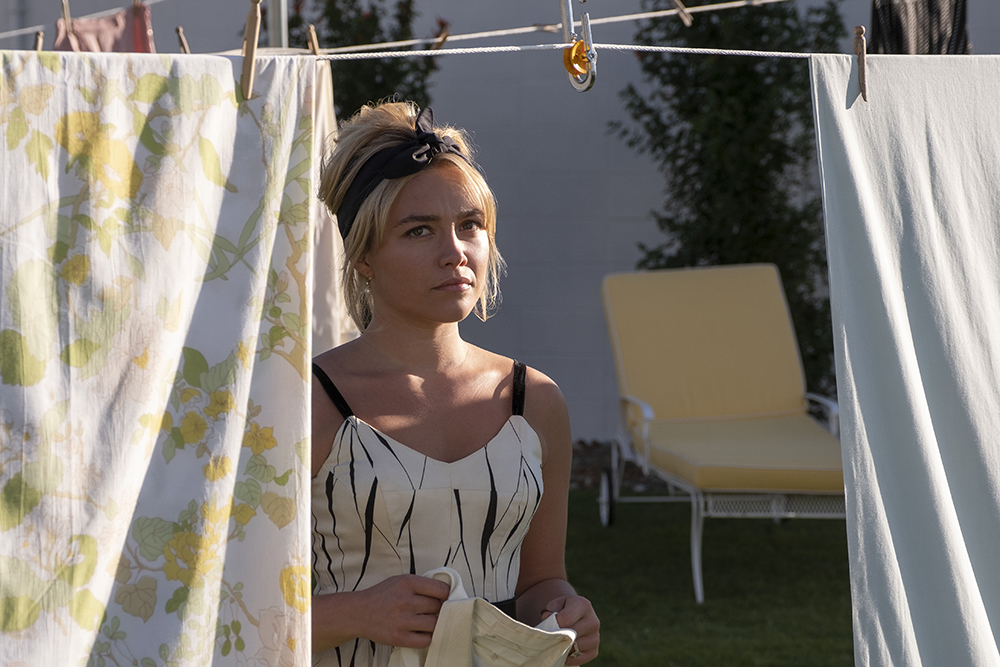 The twisty thriller “Don’t Worry Darling” has, in the months leading up to its release, become the subject of endless industry gossip and internet speculation. It can’t be determined — despite the efforts of a thousand Twitter detectives — if and how much those off-screen factors impacted the filmmaking process; while I can’t imagine the chaos helped, I won’t speculate.

Whatever the cause, “Don’t Worry Darling” is a film that tries to be subtle and nuanced aboard a runaway train. Split-screen flashes, subtle cues and character moments are buried under the rolling thunder of a wacky, untamed story and everything-but-the-kitchen-sink script. It’s a mess, and a strong lead performance only elevates it to the realm of an interesting mess.

In a simulcast sneak preview Q&A, director Olivia Wilde instructed audiences to “listen closely and don’t blink.” You’ll need to if you want to find anything to like.

That lead is from Florence Pugh, who stars as loving housewife Alice. She’s maintaining an impossibly stylish mid-century modern home in a planned community while her husband (Harry Styles) putters off to work for a mysterious organization called The Victory Project. Her neighbors are well kept but isolated in their remote town; vague references to confidential work are the explanation.

Things get more cult-y, a distressed neighbor (an underused KiKi Layne) starts hurling accusations, mysterious happenings ensue. Alice begins to suspect there’s something sinister behind the all-American gloss. The leader of the company and community, a smooth remix of Elon Musk named Frank (Chris Pine), seems to orchestrate a systemic gaslighting campaign to throw Alice off the scent — or is she really unwell?

The revelations will be, in order: underwritten, silly, vaguely offensive and unsatisfying.

Pugh truly is excellent, giving some uninspired dialogue and preposterous scenarios a much-needed boast of credibility; a handful of her co-stars (Layne, Gemma Chan and Nick Kroll all impress) also buy in. Pine, however, seems to know he’s got a dud on his hands. And Styles is dramatically, often hilariously overmatched. When he attempts to go all in on a serious scene, he rages like a cartoon villain, an unintentional “SNL” parody of himself.

Glimpses of the movie “Don’t Worry Darling” wanted to be are evident here and there — in Pugh’s performance, in the memorable design, in a quietly disturbing construction — but these serve only to highlight all the ways in which the film fails. The final joke is that “Don’t Worry Darling” seems utterly convinced of its own greatness — a would-be emperor blissfully unaware that clothes are somewhere far, far away.