The Clerks are back, but reality is catching up to them in Kevin Smith's latest self-referential comedy. 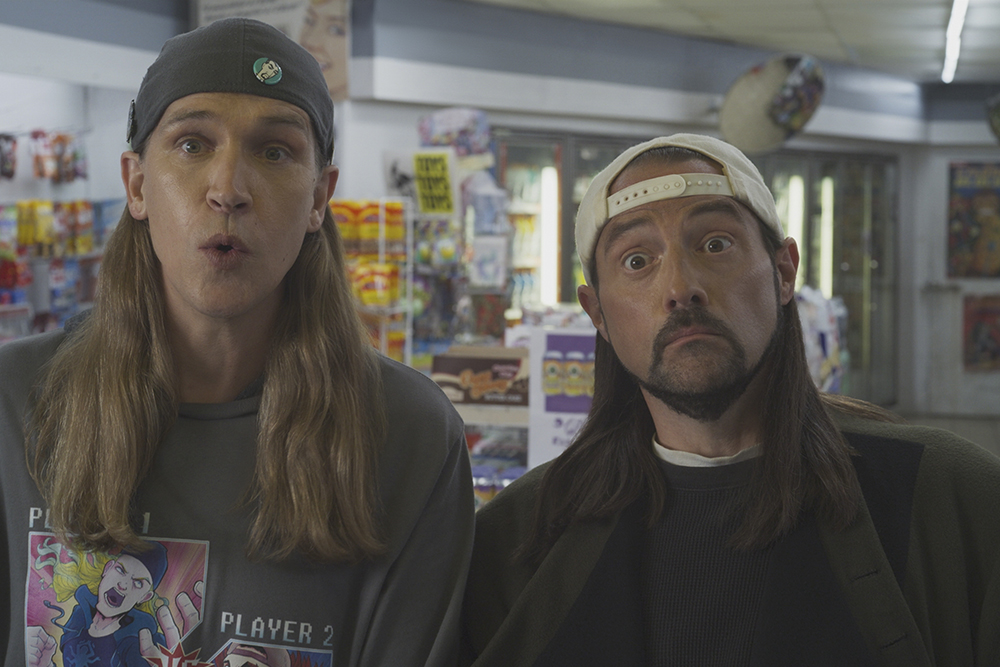 Kevin Smith’s “Clerks III” is a film torn between two intentions. At times — and in its best moments — it is a wry yet somber look at aging, as its dedicated Gen-X slackers for the first time confront mortality. At others, it is nostalgic and self-referential, less a comment on its predecessors than a celebration of them.

Charitably, these divergent aspects could be seen as complementary; honoring the past while looking to the future. From a critical perspective, though, they bear marks of self-obsession that has defined large swaths of Smith’s career. (He certainly doesn’t need to make a speech about his own movie deep in the end credits.) It’s a flawed film — but, surprisingly, it’s also very powerful.

Dante (Brian O’Halloran) and Randal (Jeff Anderson) are still working at the convenience store they hated in “Clerks” and purchased at the end of “Clerks II.” Jay (Jason Mewes) and Silent Bob (Smith) now operate a THC dispensary in the former video store next door. Missing, however, is Dante’s wife Becky (Rosario Dawson), who died in a car crash — further miring Dante in his lifelong state of arrested development.

It’s Randal, however, who sets the main events into motion by way of having a massive heart attack. After his brush with death, he decides to stop merely complaining about movies and make one himself, all about his life at the convenience store. The script he writes, unsurprisingly, has a lot in common with “Clerks,” allowing for nearly the entire cast of the original film to pop back in to play themselves.

There’s plenty of good material to mine here, both in the absurdities of DIY filmmaking and the unlikely phenomenon “Clerks” became. The metatextual aspect of the film is perfectly acceptable; if anything becomes too much, it’s the references. Every t-shirt and cereal box is its own joke, making the viewing process an exercise in eye strain.

Most of it’s funny, though, so the more indulgent moments can’t sink the film. Perhaps the parade of cameos and callbacks are the sugar to help this medicine go down; without a thousand winks to the camera, “Clerks III” would mostly be a film about grief. And while some members of the cast may be pushed slightly beyond their capabilities — forgive them, these are merely some people who agreed to be in their buddy’s movie 30 years ago — the subject matter is shockingly resonant. Smith asks how long a detached child of the ’70s can avoid confronting reality; the answer, it seems, is until the funerals begin.

Frankly, without all the connected-universe hoopla, the grim side of the film could be too jarring for devotees of the series. If you’re of the right age for “Clerks” to have launched your post-adolescent angst, get ready for “Clerks III” to kick off your mid-life crisis.

“Clerks III” will receive a limited theatrical release from Sept. 13-18.