This rollicking, riotous trip back to Hollywood's past is sloppy, but too fun to miss. 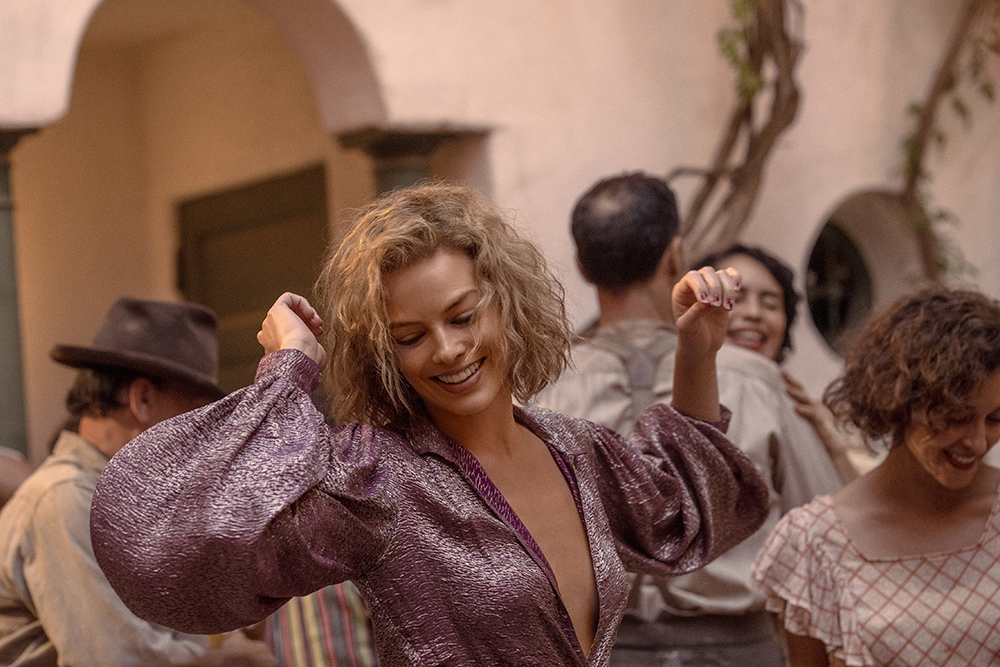 The rollicking — in fact, careening — Hollywood epic “Babylon” begins with a riotous party. A debaucherous frenzy of substances, sex, scandal and one out-of-place pachyderm is accompanied by the hands-down best musical score of the year. We meet our principal characters in madcap fashion before lurching into a tale of late-’20s Hollywood, the dream factory staring down an era of change.

Before we can get our bearings, writer/director Damien Chazelle splashes water on our faces and gets us to the movie set. We watch as reigning king of silent melodrama Jack Conrad (Brad Pitt) swings wildly between hyperactive wheeler and dealer and booze-addled disaster; we see new star Nellie LaRoy (Margot Robbie) walk onto her first set and become an instant star; we follow wide-eyed hanger-on Manny Torres (Diego Calva) get plucked from gofer to … well, a more essential gofer.

The two sequences — a night of mayhem, a day of production, equal in chaos — are exhilarating, a breakneck journey through a simultaneously idealized and demonized Tinseltown. It’s really something.

Then the movie continues, with less effectiveness, for another two hours.

“Babylon” is set at the precipice of the sound era, as actors who became stars in the old studio system must reinvent or go extinct amid a culture of excess and indulgence. (Yes, that draws inevitable comparisons to “Singin’ in the Rain,” and “Babylon” will address that similarity — with mixed results.) Its characters follow intervening peaks and valleys until either crashing, escaping or … actually, I’m not sure anyone gets a happy ending. Except, perhaps, Hollywood itself.

Chazelle, whose “La La Land” is a much more subdued take on the same myths, takes the Tarantino approach this time around: Lots of characters, plenty of stories, boundless energy. He manages to produce a high that carries through the film’s first hour before flagging in the second and decaying in the third.

Perhaps that was the point? The film does kind of move like that wild party — exuberant, then teetering on the edge of danger, then exposed to the cold light of day. Either he meant to do that, or it just kinda went that way. In either case, it doesn’t make for a satisfying ending.

It’s a mess. It’s a big, boisterous, brash mess. But the stars shine so bright, the music pumps so loud and the crash hits so hard that the film emerges a somewhat battered winner. Does it add up? Make sense? Come together? Not at all. Does it need to? Certainly not.