The long-awaited sequel to the blockbuster “Avatar” is a remarkable visual spectacle, so advanced that it looks like it’s from the future. 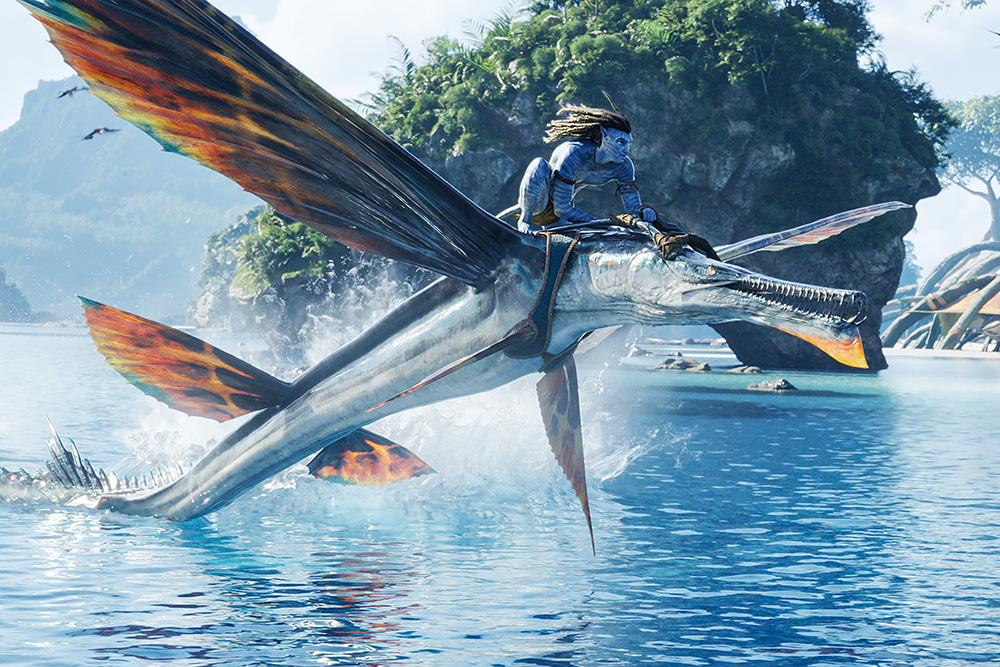 James Cameron’s “Avatar: The Way of Water” looks like it’s from the future.

In 2009, its predecessor was also very advanced; it demonstrated the way that 3D technology could revitalize and enrich theatrical special effects, and few other studios managed to match its grandeur and detail. But the first “Avatar” did not seem like the realization of an impossible feat; other 3D, computer-generated films had appeared before it. That movie was much better than its kin, but it felt like it was from the same world.

“The Way of Water,” on the other hand, stands alone.

Every frame contains the most realistic and mesmerizing computer-generated imagery I’ve ever seen. It’s as though the technology of artificial images suddenly jumped forward by 10 or 15 years — and we’re seeing its ideal, perfect implementation. Every frame is filled, from corner to corner, with images so convincing that the eye forgets it’s looking at a screen. Like the terrified early moviegoers diving away from the Lumière brothers’ train, the “Way of Water” viewer will be swiftly drawn into the world of the film in an uncanny way.

It continues looking that way for more than three hours. With most films, a bloated running time is a hindrance. With “The Way of Water,” it’s a flex; not only could Cameron and crew create these supernatural images, they could create them all night long.

I suppose there’s a plot and a story to “The Way of Water,” though it hardly matters. The relevant detail is that the soldier-turned-Na’vi Jake Sully (Sam Worthington) and his wife Neytiri (Zoe Saldaña), now with four kids in tow, are forced to flee their forest home, becoming refugees with the Metkayina clan, a group of semi-aquatic Na’vi who live alongside a massive reef.

The change from forest to ocean allows Cameron — and, it must be noted, his tens of thousands of collaborators, who are as responsible for these wonders if not more — to experiment. Dazzling, luminous underwater creatures and plants decorate the frame like holiday lights; massive, whale-like creatures race through the sea. The design of the Metkayina village is whimsical — all nets and shells — but the natural world, from dark corners of the ocean to the sky, is the language of the “Avatar” series. It’s spoken eloquently.

Frankly, I’m not sure how the rest of Hollywood can possibly respond. After “The Way of Water,” it would be absurd to pretend that the weightless, soupy dinosaurs of the recent “Jurassic Park” films are any more corporeal than Roger Rabbit. Even the impressive if unrealistic graphics of Marvel’s blockbusters seem rudimentary in comparison. There’s a larger question here about the practicality of such digital epics, particularly with ongoing labor questions about the visual-effects industry; in the case of “The Way of Water,” however, I’ll put such concerns aside.

It’s simply too breathtaking. Too remarkable of an experience. Yes, it lacks narrative originality and character development. In fact, it should be illegal to watch “The Way of Water” on a home screen; doing so would be an absurd act, like peering at the Mona Lisa through binoculars from atop the Eiffel Tower. If you can’t see it in a state-of-the-art, 3D cinema, don’t bother. The grandeur is the whole point.

And what a remarkable experience it is. Go now. And pick the biggest screen you can find.

“Avatar: The Way of Water” is now playing in theaters.