Reviews of "Going in Style" and "Smurfs: The Lost Village," plus local movie news and notes. 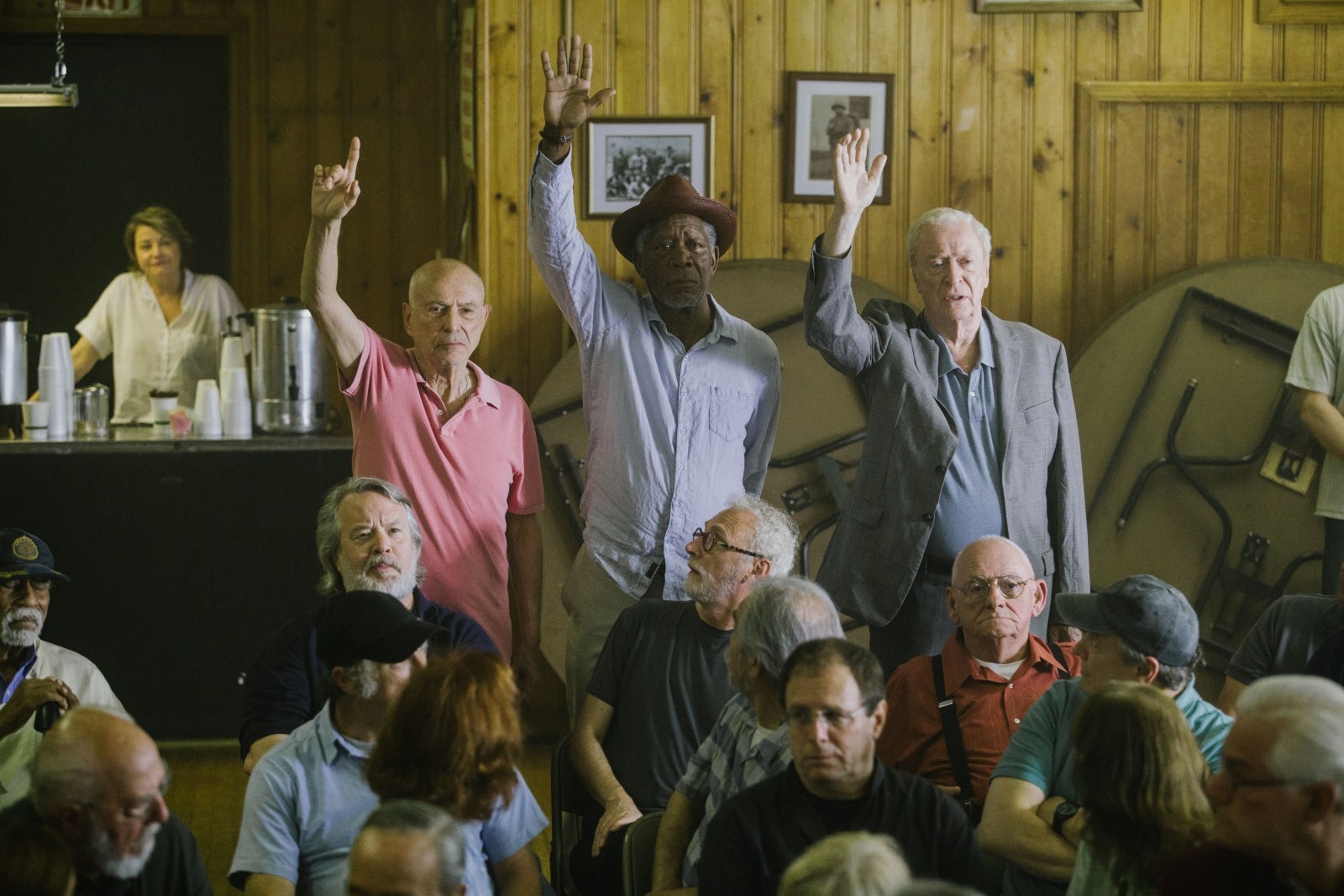 Some assemblages of talent are just too good.

Take “Going in Style,” for example. It’s something of an unremarkable story — three retirees get screwed by the banks and decide to team up for an unlikely heist. It’s an old-people comedy — there are plenty of those released each year, and they’re generally quite pleasant if not at all memorable — with a decent twist on the template. There are some laughs while other parts drag. You know, a movie.

But in this case the old people are Morgan Freeman, Michael Caine and Alan Arkin. (And the supporting cast includes Christopher Lloyd, Ann-Margaret, Matt Dillon and Kenan Thompson.) So don’t bother resisting. It’s a charming affair.

Our trio of septuagenarians are, collectively, in bad shape. All three have lost their pensions after some corporate tapdancing. Joe (Caine) stands to lose his house after the bank pulls a fast one. Willie (Freeman) needs a kidney. And Albert (Arkin) is generally a grump. When Joe goes in to tussle with the bankers, he witnesses an armed robbery; when things get really desperate, he thinks to himself, “I could do that.”

Most of what follows is a by-the-numbers sequence of planning and preparation; it’s a normal heist flick with the jokes from a normal back-in-the-saddle comedy. As many jokes miss as hit, and the ending peters out a bit — a series of whimpers rather than a single bang — but with the triad of actors on screen at nearly all times, you won’t be too concerned. Just sit back and be mildly amused.

One other note, though: “Going in Style” represents a victory for its director, Zach Braff. The former “Scrubs” star had a hit with his debut feature, “Garden State,” a proto-hipster tale of Millennial angst (before we had even figured out what Millennials were). It was a fairly effective film, although it was clear that Braff needed to focus his efforts: He directed, wrote and starred in “Garden State.” Instead of dialing in, though, he only added to his micromanagement with his long-delayed sophomore effort, “Wish I Was Here,” which he produced after funding via Kickstarter.

“Wish I Was Here” was, in short, “Garden State” if that film were utterly insufferable. So it’s refreshing and encouraging to see a film that is quietly directed by Braff, and in which he had no further involvement. He’s clearly a talented guy, he just needs a few other voices around to counteract him.

The sound and fury around the live-action “Ghost in the Shell,” released last week, far outweighed the reaction to the film itself. Accusations of whitewashing severely impacted the film’s domestic box-office potential, as the lavish production grossed less than $19 million in its opening frame, good for a third-place finish. Disappointed fans can console themselves, however: The well-regarded original “Ghost in the Shell,” a classic of ’90s animation, will serve as the closing-night film of the second annual Pittsburgh Japanese Film Festival.

Row House Cinema hosts the week-long event, which features a cross-section of contemporary and classic Japanese filmmaking. Among the selections: the over-the-top Yakuza flick “Why Don’t You Play in Hell”; the uncanny ’70s fright fest “House”; the trendsetting anime “Sailor Moon R”; and the opening-night film, “Samurai Cat” — yes, it’s a tale of swords and felines — making its Pittsburgh debut.

A number of special events are scheduled throughout the week, including food pairings (a Row House specialty). The dedicated fan can also purchase an (almost) all-access pass for $30. The festival website has full showtime and ticket info.

There’s something refreshing about “Smurfs: The Lost Village,” the computer-animated reboot of the big-screen “Smurfs” revival. The previous two films were live-action/animation blends; after “Smurfs 2,” which I did not realize existed until I began typing this sentence, flopped at the box-office, the Smurf-masters hit the reset button. The resulting cartoon was certainly not something I necessarily enjoyed; it’s simple, unoriginal and broad. But the refreshing part: It’s actually for kids. The jokes and setup of “The Lost Village” are straight out of Saturday-morning cartoons, with no winking nods to parents or attempts to hook early teens via defiant, sassy characters. Instead, it’s the rare film actually targeted purely at the third-grade-and-under set. Is it a good movie? No, not really. Will your 6-year-old love it? Oh yeah. Take the kids and try to sneak in a nap while they’re enthralled.

The Montage: The annual Banff Mountain Film Festival World Tour, featuring a remarkable collection of outdoor-sports and nature shorts, makes its annual Pittsburgh stop this weekend at the Byham Theater. The event doubles as a fundraiser for Venture Outdoors; preview the lineup of films here and click here for info on tickets … The Hollywood Theater is on an impressive run, bringing indie and foreign horror flicks to Pittsburgh. Hot on the heels of a two-week run for the deeply uncomfortable “Raw,” they’ll be presenting the local premiere of the ambitious Canadian shocker “The Void.” Click here for info … Werner Herzog’s epic “Queen of the Desert,” with Nicole Kidman, opens today at the Harris. Click here for showtimes.