Meet the Man Who Is Propelling Pitt’s Health Sciences

Anantha Shekhar has big goals for the University of Pittsburgh’s schools of health sciences, from lessening racial inequity to improving its national rankings, and he’s not letting a pandemic slow him down. 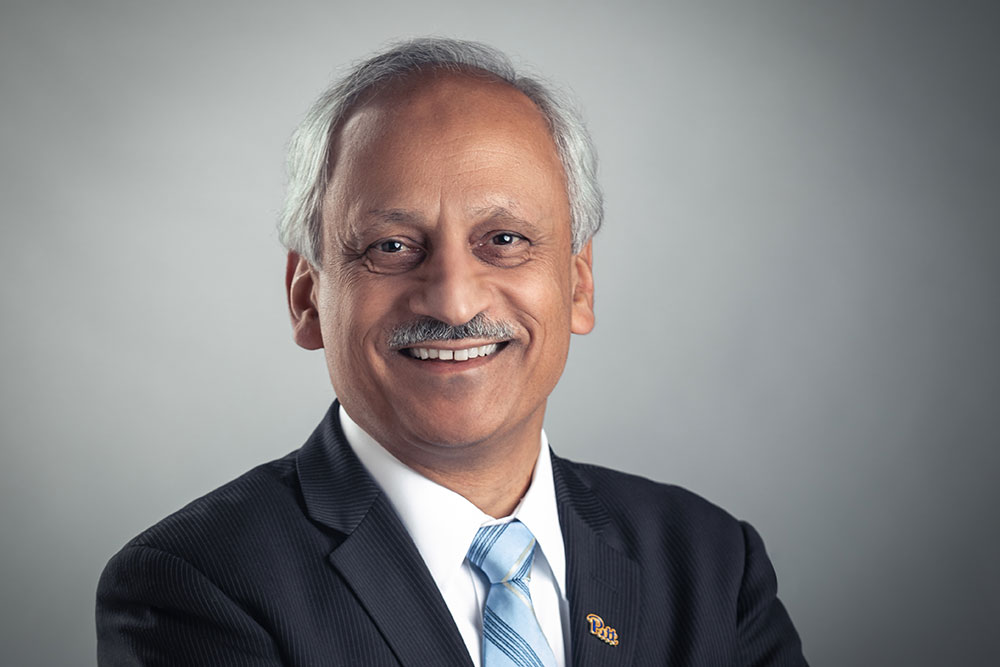 When Anantha Shekhar accepted the job of senior vice chancellor for the health sciences at the University of Pittsburgh, he recognized the immensity of the challenge.

The 63-year-old neuroscientist from Indiana University had supervised research at that university’s medical school, the largest in the nation, but at Pitt, he not only would serve as medical school dean but would also oversee five other top-ranked health sciences schools: public health, nursing, dentistry, rehabilitation sciences and pharmacy.

Together, they have a budget of nearly $500 million a year, about two and a half times more than the operation he led at Indiana.

All of that would have been daunting enough, yet before he even stepped into his office for the first time in June, he had to contend with two huge challenges none of his predecessors ever had to confront — the COVID-19 pandemic and the nationwide calls for racial equality following the killing of George Floyd, which at Pitt took the form of Black medical students demanding reforms, ranging from requests for new scholarships to better accountability for campus police.

Shekhar granted several of the students’ requests, including the creation of three minority scholarships per year.

As he moved from one meeting to another in his first weeks on the job, nothing seemed to ruffle his calm demeanor, a trait he was known for during his years as executive vice president in charge of medical training and research at Indiana University.

“He’s extraordinarily gracious, inclusive and empathetic,” says Dr. D. Wade Clapp, the chief of pediatrics at Indiana University and one of Shekhar’s closest friends. “He is hard charging, too, but works the hardest himself. There’s sort of a joke we had here, that there’s three Ananthas, and at any time, two of them are up working and only one is asleep.”

Shekhar, whose name is pronounced a-NAN-thuh SHAKE-er, is the first new senior vice chancellor of the health sciences at Pitt in 22 years. He succeeds Arthur Levine, who has taken over as executive director of Pitt’s Brain Institute, in particular its Alzheimer’s research.

In an exclusive interview with Pittsburgh Magazine, Shekhar said he relishes the chance to tackle big goals at Pitt and take on the challenges 2020 has brought.

By the time Shekhar arrived, Pitt already was confronting the coronavirus on several fronts. Its affiliated UPMC health system was caring for COVID-19 patients; it was signing up volunteers to test vaccines being developed by other companies; and it was working on several experimental vaccines of its own, including one that could be delivered through a patch with hundreds of tiny needles that would dissolve once they had delivered the vaccine through a patient’s skin.

Like other leading scientists, Shekhar has been dismayed by the way America has responded to the coronavirus crisis.

“Our leaders need to understand that the only way to deal with a pandemic is through science and planning, and unfortunately, that’s been less and less demonstrated across the country.”

COVID-19 also has shown the weakness of America’s public health system, which relies on underfunded departments that are scattered across the nation and often are ill-prepared for major disease outbreaks.

One consequence of that, he says, is that Black and Latino Americans have disproportionately suffered from the pandemic. Through the middle of November, Black residents of Allegheny County have accounted for 18 percent of all COVID-19 cases, even though they comprise only 13 percent of the county’s population.

The pandemic in the U.S., Shekhar says, shows “our long-term neglect of health justice and health equity. That has created a subset of our population that is so vulnerable that even standard public health measures aren’t protecting them.”

Over the past several decades, he says, “I think we as a medical community have lost trust because we have routinely failed the needs” of Blacks and Latinos. “We have colluded with all the market forces in health care and essentially created segregated medical care for those with low resources. And that legacy is not easy to overcome.”

Dr. Naudia Jonassaint, the vice-chair for diversity and inclusion at Pitt’s School of Medicine, is impressed by her new boss’s candor.

“He started out by telling us that he gives Pitt a ‘D’ in diversity and equity,” Jonassaint says. “To say that in the first two weeks on the job is kind of bold. I really feel like he is going to push the envelope.”

Shekhar says one of his goals is to increase the percentage of minority faculty members to 7 or 8 percent within the next five years. 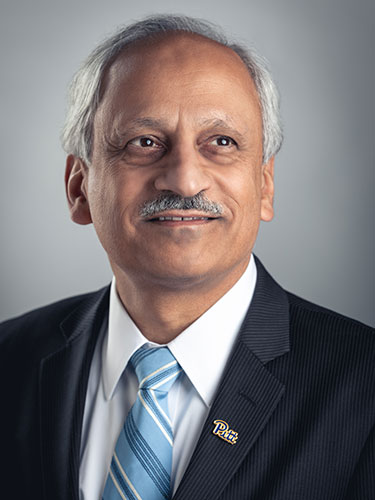 His motivation comes partly from the fact that he is a first-generation American who grew up in a small village in India that had no electricity or running water.

He attended medical school at St. John’s Medical College in Bangalore, a southern Indian city that is the Silicon Valley of that nation.

After emigrating to the U.S. in 1981, he earned his Ph.D. in neuroscience at Indiana University. There, he met his wife, child psychiatrist Gina Laite. They have two adult children. Son Gabriel is a cancer genetics researcher at Indiana University, and daughter Ana is an attorney specializing in elder law with a firm in Indianapolis.

In the few hours he spends outside work, Shekhar says he and his wife love the arts and music. His wife creates etchings and woodcuts, and they are regular patrons of the symphony and opera, which is another reason he is excited to be in Pittsburgh. They also enjoy running, biking and kayaking.

Although the pandemic has kept him from circulating in the community as much as he would like, he has been struck by the fact that “Pittsburgh people are way more friendly even than in the Midwest. It’s been incredibly welcoming.”

Shekhar has been guaranteed a base salary of $1 million a year, with the potential of annual bonuses of $400,000, the Pittsburgh Post-Gazette has reported.

Still, that’s about a quarter of the salary of Pitt’s football coach, Pat Narduzzi.

One small regret Shekhar has in taking on such a big job is that he will have to step back from the scientific research he has done over the last several years on such brain disorders as depression, post-traumatic stress and schizophrenia. In fact, one of the spinoff companies he created in Indiana is waiting for FDA approval of the first new type of schizophrenia medication in the past 70 years.

As an immigrant, Shekhar is acutely aware of what an important role foreign-born students play in America’s university and corporate research labs. He believes it’s imperative for America to have an open, welcoming immigration policy.

“American universities have been the hilltop in every talented scientifically inclined child’s imagination. I grew up in a small, small village, and I dreamt of coming to America and being a scientist here. And that is what has driven all of the innovation of the U.S., especially after the Second World War.”

PUSHING FOR A TOP 3 RANKING

At Indiana University, where he had worked since earning his graduate degree, he had reached the point where he knew he wanted to take on the challenge of running a bigger university health sciences operation.

He didn’t expect that his next step would come so quickly. He first talked to Pitt’s search firm in mid-October of last year, and by the beginning of January, the deal was done.

At Pitt, he is joining a health sciences complex whose six schools already are ranked among the top 10 in the nation. The university currently ranks seventh among all recipients of grants from the National Institutes of Health.

He thinks Pitt can do even better. “I think we have the opportunity to be one of the top three institutions in the country in health sciences.”

And he doesn’t want to get there just by promoting the kind of highly complex medical research that Pitt has been known for, such as brain implants and organ transplants. Just as important, he says, is emphasizing research on the “social determinants” of health care — the way that income inequality, racial prejudice, poor diets and lack of trust in the health system make people’s lives worse.

That perspective, according to the search committee’s chair, Provost Ann Cudd, was appealing.

When the committee brought in a dozen semifinalists last year for interviews in a Downtown hotel, she says, Shekhar’s interview was “astonishingly wonderful.”

“It wasn’t just that he is an innovative scientist, has patentable inventions, and was an administrator at the largest medical school in the country, but he also is very aware of the disparities that exist in American medicine and in society in general,” she says.

As one approach to addressing that, Shekhar hired Maureen Lichtveld in November to become the new dean of the Graduate School of Public Health. Lichtveld has been director of the Center for Gulf Coast Environmental Health Research, Leadership and Strategic Initiatives at Tulane University in Louisiana, and is known for her work on health disparities that affect minority communities.

Another hallmark of Shekhar’s career is his intense desire to speed up the transfer of basic discoveries in the lab to everyday patient care.

Historically, Shekhar says, it takes 15 years before a discovery in the lab becomes a widespread clinical treatment. He thinks the time frame ought to be more like three to five years. And because Pitt has a partnership with UPMC, it offers the opportunity to test new treatments more quickly, without sacrificing scientific rigor.

What does he hope to accomplish in his first year?

By June 2021, assuming the nation has a handle on COVID-19, “I would like to have a very different culture in the medical school — a culture of commitment to diversity, to excellence, and a confidence that we can actually achieve the goals that I imagine we should reach. If we’re on a trajectory for those, I would see that as a great success.”

This article appears in the December 2020 issue of Pittsburgh Magazine.
Categories: From the Magazine, Hot Reads, Medicine and Health Features