March Madness is not for the Faint of Heart

Robert Morris’ last-second survival in the Northeast Conference semifinals re-introduced tournament basketball with all the mayhem and euphoria we’ve come to anticipate at this point of a season. 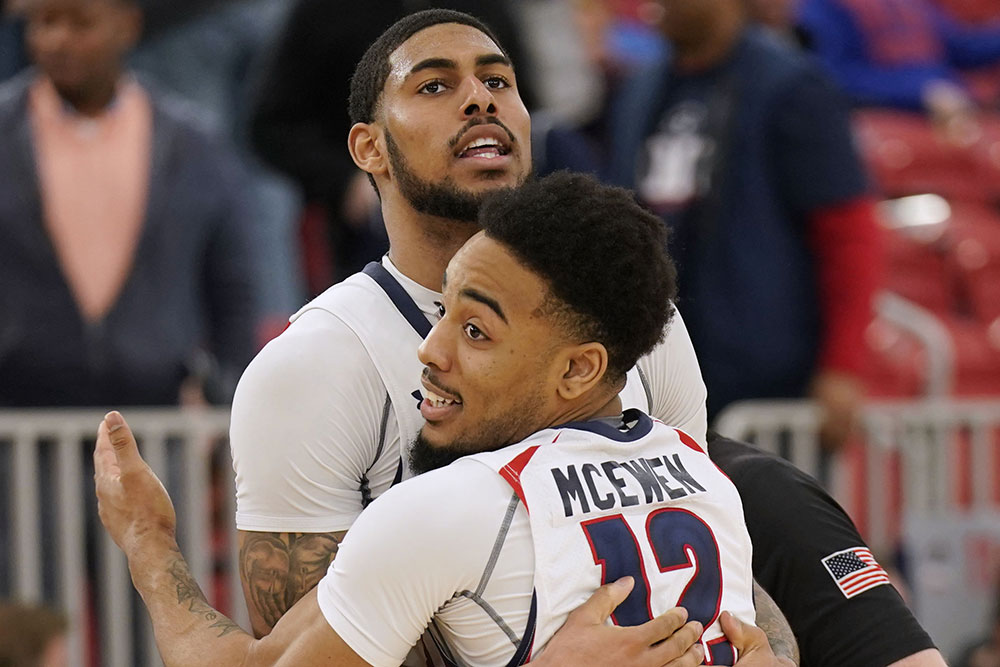 The shot, an off-balance runner from the lane in traffic, went up as the final seconds ticked down.

The ball hit the backboard and then bounced off the rim.

And as it was coming back down again the final buzzer went off.

“Welcome to conference tournament basketball,” Robert Morris head coach Andy Toole exhaled about a half an hour later, after the dust had settled but not everyone’s heart rate.

Toole was flanked in the media room at the UPMC Events Center on Wednesday night by junior forward AJ Bramah and senior guard Josh Williams.

The shot had ultimately stayed out. 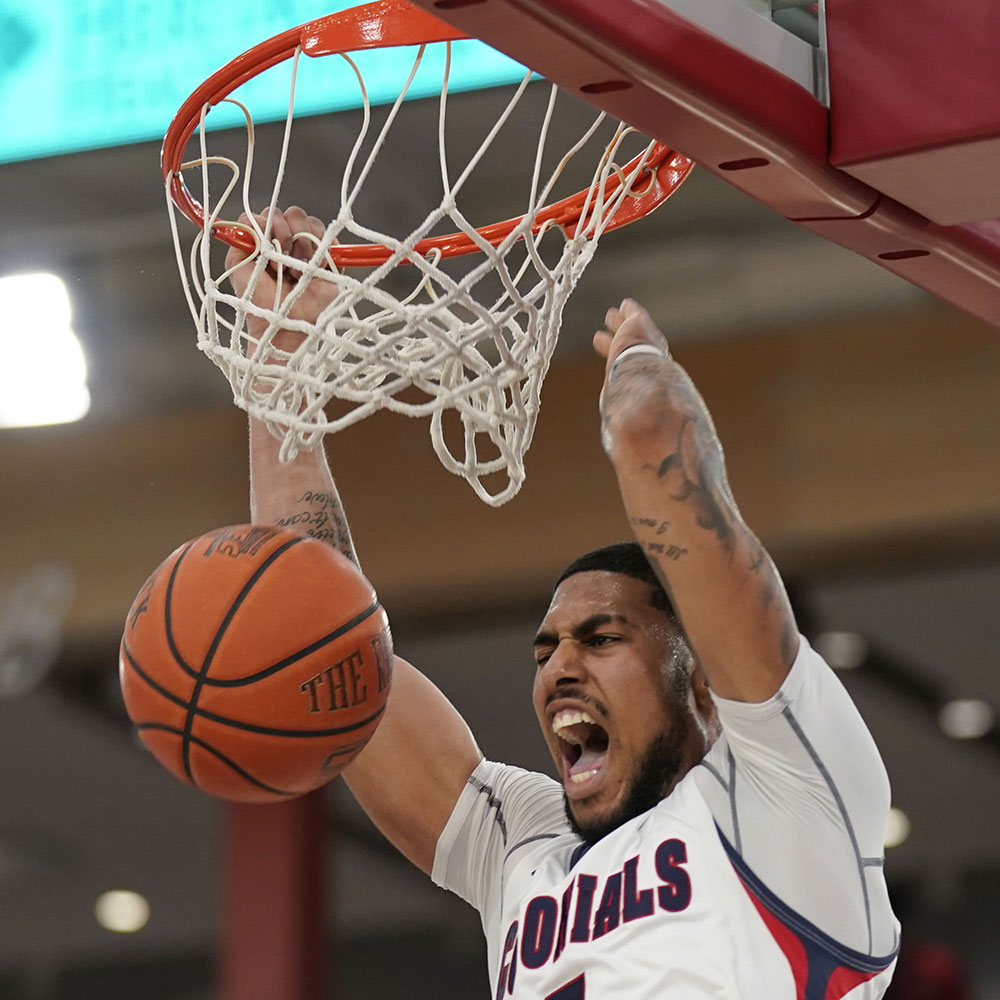 Robert Morris had survived and advanced, 59-58.

But the trio of Colonials at the podium looked and sounded more relieved than euphoric.

There was also this from Williams: “I didn’t know what to expect.”

Not knowing what to expect, what could possibly happen next, is what makes us take a temporary leave of our senses.

“One bounce of the ball and we’re all hootin’ and hollerin’,” St. Francis Brooklyn head coach Glenn Braica lamented.

Down here it’s just winners and losers, and don’t get caught on the wrong side of that line. 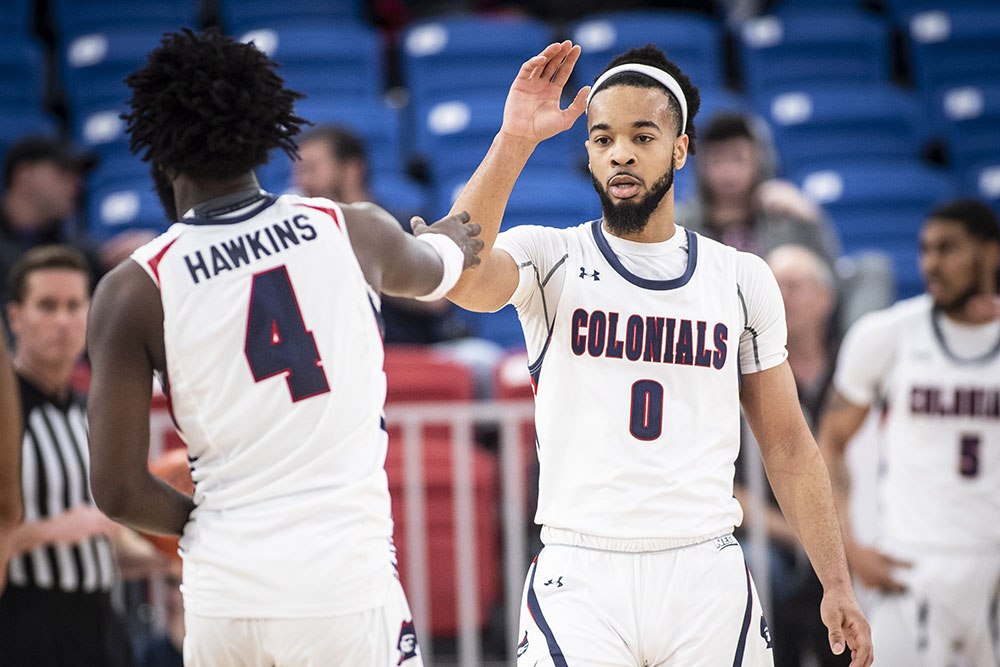 The Colonials have just gotten started in the Northeast Conference Tournament. Their win on Wednesday night assured them of nothing beyond a chance to play again in the semifinals on Saturday afternoon.

They’ll have to win that one and then win again in the conference championship game next Tuesday to earn the school’s first bid to the NCAA Tournament since 2015.

That’s what he told his player when things got tight on Wednesday night when a 14-point lead had become a four-point deficit.

That’s what he’ll tell them as long as there are still seconds left on a clock somewhere.

There will be more take-your-breath-away bounces in store, more leads to protect and more blown leads to overcome, more moments that will reveal a team’s resolve along with its ability to shoot the ball.

“That’s what conference tournament basketball is,” Toole told the media. “It can be crazy, it can be wild but the idea and the objective is to live another day.”

The Big Boy conference tournaments will be staged next week, and a great many of the teams that aren’t able to successfully navigate those will still be invited to the Big Dance.

But for the likes of Robert Morris and Long Island University – they’ll meet at 2 p.m. Saturday in Moon Township – the Madness is already at hand.

The Dukes have already won 20 games (21-8) for just the third time in the last 48 years. But unless they win the upcoming Atlantic 10 Tournament, that elusive first NCAA bid since 1977 will remain out of Duquesne’s reach.

Perhaps that’s why head coach Keith Dambrot went on the offensive this week.

“I took the boxing gloves off,” he announced on Monday. “It’s time now, we gotta go. I got ’em to this point being nice and friendly but now I’m going to be unfriendly. I love ’em, but I want to get what I want to get now. I want them to get what they want to get.

Duquesne responded with an 80-77 win in overtime on Tuesday night at Virginia Tech and set a program record with an 11th win in the Atlantic 10 (11-6).

There might be to RMU President Chris Howard’s, as well.

But all that was detectible on Wednesday was the Madness.

Howard has degrees from the United States Air Force Academy, the Harvard Business School and Oxford.

But when an emphatic dunk by Bramah with just over two minutes left in regulation had given the Colonials a five-point lead, Howard’s response was to jump up and down in front of his courtside seat with a passion that was as unbridled as it was unapologetic.

There will be time enough for sanity to be regained come April.