Located on the site of one of Pittsburgh's former glass factories, and with a view of Downtown, the five-story, mixed-use development is set to open later this month. 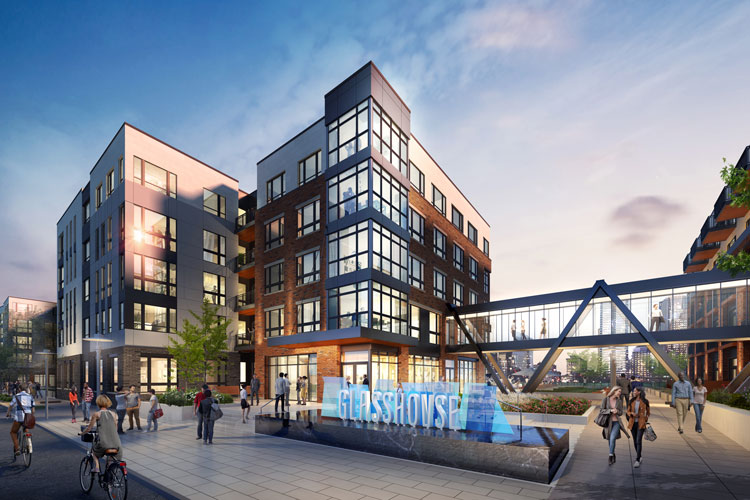 Pittsburgh goes by many nicknames— among them the City of Bridges and the Steel City — but it’s the city’s glass-making past that inspired a new riverfront mixed-use development.

Set to open later this month, Glasshouse Apartments, located along the Monongahela River next to Station Square, pays tribute to Pittsburgh’s extensive history in the glass industry.

Before steel-making took over, Western Pennsylvania was known as the nation's glass hub. By 1920, the region produced 80 percent of the country’s glass, according to WESA. Pittsburgh's three rivers— particularly a large sandbar located in the middle of the Monongahela— proved to be a great resource for mining the materials needed to make the glass.

“Pittsburgh’s glass making was a great part of the history here,” says James Murray-Coleman, senior vice president of Pittsburgh-based Trammell Crow Company, “Years ago, some of the glass that sat on tables in the White House was made on this site in Pittsburgh.” 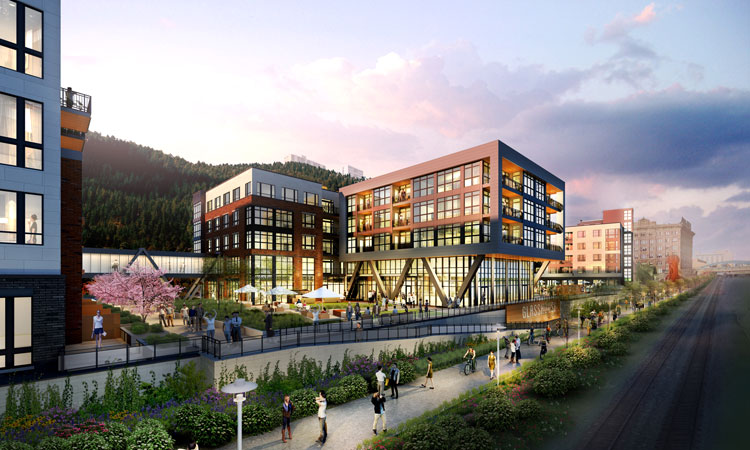 Developed by High Street Residential, a subsidiary of Trammell Crow Company, the five-story, mixed-use buildings consists of 319 apartment units that range in size from 665 to 1,200 square feet. There are junior one-bedroom, one-bedroom, one-bedroom plus den, and two-bedroom residency options. Leasing prices start at $1,610 per month.

Dubbed the Liberty and the Smithfield, Glasshouse's two adjacent U-shaped buildings — which also include 340 underground parking spots — are named after the nearby Liberty and Smithfield bridges that lead from Downtown to the South Side. “We wanted to keep the names simple,” Murray-Coleman says.

The $70 million dollar project took almost two years to complete and included extensive cleanup on the site, which was once home to the Attleburg Glass Company. Baltimore-based architect Hord Coplan Macht — which Murray-Coleman says was chosen because of its extensive waterfront project experience — led the design process beginning in late 2017.

The apartments themselves feature floor-to-ceiling glass windows, many with views of the city’s bridges and Downtown.

“We took a focus on creating as much glass area as possible,” Murray-Colman says. “We wanted to highlight those views from the apartments.” 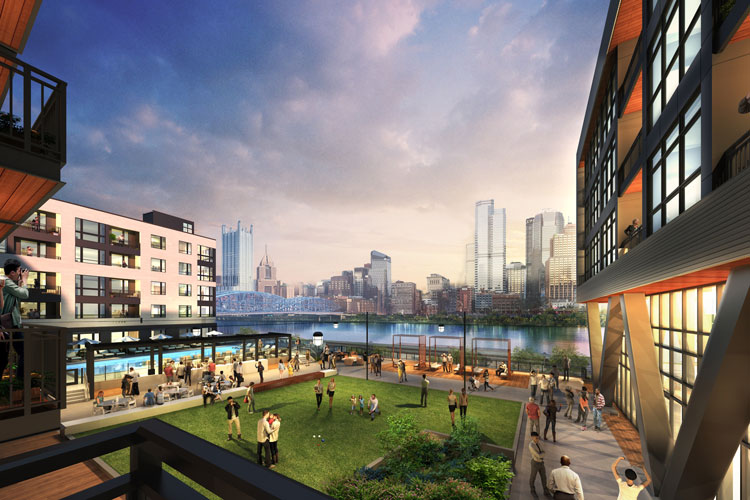 Situated along the Great Allegheny Passage, Glasshouse is only steps away from the riverfront trail that connects Pittsburgh to Washington, D.C. and about an 8-minute walk from Downtown. An on-site bike-sharing program through Healthy Ride provided to all residents also is scheduled to be installed in the coming weeks.

A glass bridge connects the apartments buildings so that residents don’t have to step outside to experience all of Glasshouse’s amenities, which include a workout room, a zero-edge pool and an outdoor green space with grilling areas and fire pits.

Paying tribute to local crafters, Glasshouse also features work from various Pittsburgh artists. Each apartment has a custom-made pendant from the Pittsburgh Glass Center and there are exhibits from local artists — including Matt Kolbrener, Jeremy Raymer and Atticus Adams — installed throughout the buildings.

While residents are able to begin moving into the Smithfield at the end of August, the Liberty won’t be available for occupancy until later this fall. So far, Glasshouse has leased 30 of its units, Murray-Coleman says.

“We are extremely excited, leasing these units so quickly, but there are plenty of units left with spectacular views,” Murray-Coleman says.