Lidia Bastianich Shares Her American Dream in a New Memoir

PM Dining Critic Hal B. Klein talks to the celebrated chef, restauranteur, television host and author about grandparents, foraging and the plight of refugees seeking a better life in the United States. 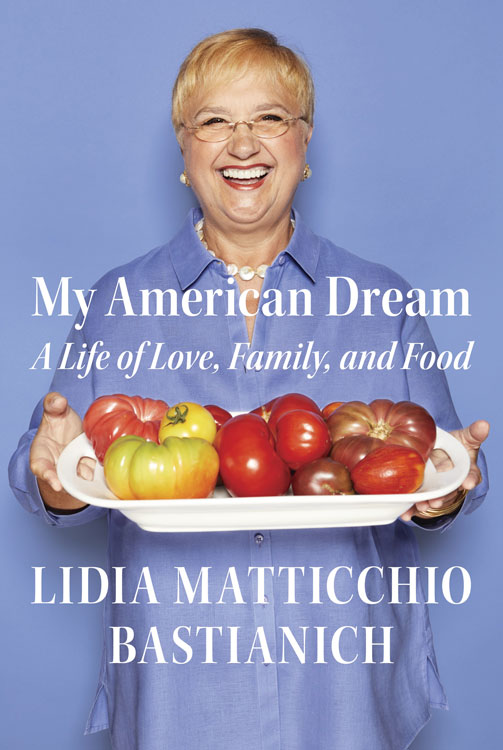 Celebrated chef, restaurateur, television personality and author Lidia Matticchio Bastianich immigrated to the United States with her family in 1958. She is the owner or co-owner of six restaurants, including Lidia’s Pittsburgh, which opened in the Strip District in 2001, as well as five locations of the delectable Italian food emporium Eataly. Bastianich is the author of 13 cookbooks. “My American Dream: A Life of Love, Family, and Food” is her first memoir.

The following interview was lightly edited for length and clarity:

You’ve lead a remarkable life, Lidia. You grew up in challenging circumstances and worked to became one of the food world’s most influential and recognizable people. How did you do it?

I am who I am. I’m very much a product of my past, but also of my future. I am that person that was shaped by all of the elements that you read along the way in the book. Some were good, some were tough, but I am very grateful for many things that I had in life. Family, children, grandchildren. For being able to to be successful in business, live comfortably and have the opportunity to communicate and touch people with my story. Now, I have opportunity to give back.

You lived for two years in a refugee camp and then came to America with your family in search of a better life. How do you feel about what’s happening now at the southern border of the United States?

I can’t help but think of how I felt in the refugee camp. I can’t help but feel for these families, these children. Especially the children. When we first came into the camp, we were quarantined for checkups. I remember how frightened I was because they separated my father and brother from my mother and me, and I thought I’d never see them again. I can feel what they feel today. My story is a story of immigration for a better life. I lived the immigrant’s story. I thought I’d take a few more years to write this book, but then I thought, “Maybe this is the time now.” Our family was given the opportunity to come here and we made an American dream of our lives. Immigrants, if given a chance, will do that. America is made of immigrants.

You seem to have very fond memories of foraging for food as a child in Istria and of “raiding” the fruit trees as a refugee in Trieste. Foraging used to be dismissed as a refuge of the poor, but now it’s seen by a lot of people as a very hip thing to do.

That’s what’s so amazing. What it tells me is even with modernization and moving forward toward the future one should never forget the basics, especially with food. The basics are the basics. The land, the earth, the sea, this is where food comes from. This should not change, will not change, unless we let people change it. Some of the problems we have now is that we let big industry change that, dramatically, and without respect for the planet. Human beings are intelligent, but we are not almighty and we shouldn’t try to change everything. There are certain things on Earth that need to remain constant for us to live as decent life. [With this] retro to-the-land movement, I say to my grandchildren that I did that with my grandma. Now, maybe we can’t do it exactly the same way that I did with my grandmother, but we can grow food and find food using the same values. Not everyone can have a garden or keep animals, but other people can do that and they can specialize in it. We as consumers need to support those people. We need to do that. We need to respect and buy from the farmer that grows with integrity and that respects the Earth. We might be once-removed from that now, but we are not really that far removed.

Can you talk a bit about the influence of grandparents when you were growing up as compared to how it is today?

Transgenerational communication and support systems are extremely important. Even if the situation was dire with communism I had the unconditional love of two generations. Today, as parents, we want to push our kids as much as we can and always look forward to what they can be, but we neglect, too much, what's behind. Grandparents offer richness, stability, unconditional love and lessons from a life of experiences. Grandparents can pass on in a loving way a whole life of knowledge. I think that children today are more deprived of it than ever. Grandparents are put away into homes and they are not close enough to their grandchildren. Life if built on memories. The memories I have of how hard [my grandparents] worked and their respect of nature, all of that remains with me. I think that as a society we should revisit that connection. Too many children have a lack of love and affection, and on the other hand, older people are lonely and separated. Let's fix that.

What would you like to see next for Italian cooking in the United States?

America loves Italy and Italian food. I’ve been in the business of cooking Italian food in the United States since 1971. All the time, I think ‘How do I bring food of the regions of my native Italy to my adoptive country?’ First, you realize you need the traditional products to do that. You need the right rice to make risotto. If you don’t have it, you don’t make it. Today, we have access to about 90% of the traditional Italian products. What I love seeing right now is young American chefs embracing those Italian products and somehow including this into their own cuisines. I really enjoy and appreciate how chefs are embracing that.

Bastianich will visit Lidia’s Pittsburgh beginning at 6 p.m. on Tuesday, June 26 to celebrate the release of her memoir. The special three-course menu will feature family-style antipasti such as asparagus and fresh ricotta, entrees of pollo al limone, osso bucco and Lidia’s pasta tasting trio and a family-style selection of house-made desserts. Reservations are available throughout the evening.