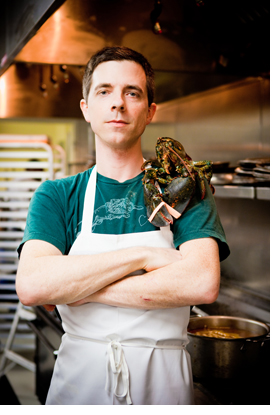 HOOPER ADDS AMERICAN CLASSIC TO LEGUME'S MENU
It was bound to happen. In a city full of burger lovers, it only makes sense for Legume (our Best New Restaurant of 2012) to also offer the beefy staple. Making its debut yesterday, the grass-fed burgers will be served at Legume's bar this month, as executive chef/co-owner Trevett Hooper is still finalizing details. See, he's straightforward about his approach: The burger isn't supposed to be fancy — but it is supposed to be tasty (with fresh meat from Jamison Farm that's ground in-house, how could it not?).

Because Hooper and his crew are working with fresh meat, there's a limited number of burgers available daily — and since the patties will be placed atop fresh buns from La Gourmandine, these will likely be hot commodities. Right now, patrons can add cheese and condiments to the juicy creation (and possibly an aioli of some sort). Whatever you do, please don't forget to ask for a bottle of Heinz.

EDWARD MARC PUTS SWEET SPIN ON FATHER'S DAY GIFTS
Face it: Your dad couldn't possibly fit another tie in that rotating rack he has in the back of his closet. So, if you're doing some last-minute shopping for an amazing Father's Day gift, don't even think about getting him one. You could, however, splurge on something sweet … that's in the shape of a tie.

Fan favorite Edward Marc Chocolatier has been delighting taste buds since 1914, so any chocolate box that features the Tiffany blue lid is a winner. Especially the seven-piece Chocolate Tie Box: For this particular gift, four of the company's top fillings are used — salted caramel, dark honey coconut, white-mocha meltaway and peanut-butter meltaway. Even better, the ties feature different colors and patterns — perfect for the guy who likes variety.

If you're serious about buying this gift, hurry — but really: Keep Edward Marc's One Sweet Gesture program in mind when checking out so that a charity can benefit from the purchase. Sweet deal!

FIFTIES-STYLE RESTAURANT IN BEAVER CATERS TO YOU
Not in the mood to cook tonight — or even dine out, for that matter (it's been a long week, we know)? Then head to Jerry’s Curb Service for a hearty American meal — where you won’t even have to step out of the car!

This Beaver County restaurant, which is the original franchise location, has been pleasing locals since 1947. Friendly waitresses come to your car to take your order and return with a tray that rests on your vehicle — but what's on that tray is totally up to you: With average meals costing 10 bucks or less, you have fine options like burgers and hand-cut fries (a go-to choice)— or a salad done the Pittsburgh way (with fries on top).

On a warm day, you'd better order one of the shakes, available in such flavors as chocolate, vanilla or strawberry. What could go better with old-school tunes (playing on your radio) and old-fashioned fare? Exactly.

This article appears in the June 2012 issue of Eat Street.
Categories: PGHeats