Reviews of "The Boss Baby," "Ghost in the Shell" and "The Zookeeper's Wife" plus local movie news and notes. 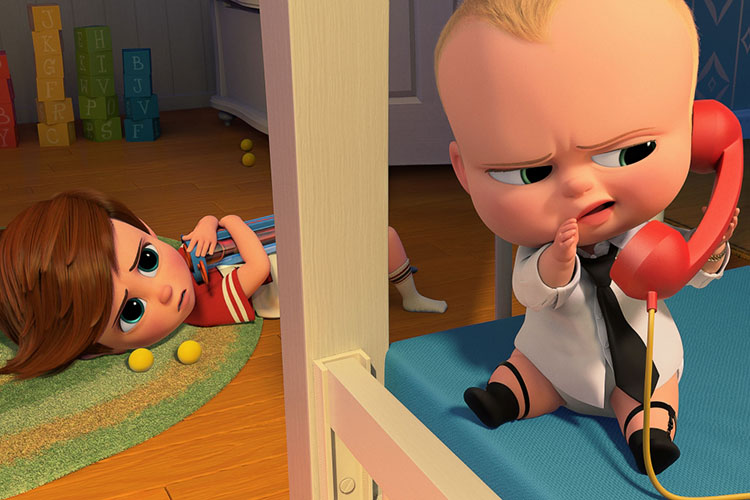 If you’ve been around the internet for long, you’ve likely come across a meme or social-media post reflecting on the “DreamWorks Face.”

That would be the signature smirk of characters appearing in films by DreamWorks Animation — starting with the studio’s golden boy, Shrek, and continuing unabated in this weekend’s new release, “The Boss Baby.” The criticism: As opposed to textually rich and innovative works of animation from the likes of Pixar and Disney, DreamWorks movies are about anthropomorphized animals or atypical humanoids smirking, joking and flatulating in the camera’s direction.

An excellent essay on Film School Rejects dug deeper on this dilemma, though. It’s not just that the studio’s offerings — “Boss Baby” is the studio’s 34th film since 1998 — are broad and repetitive. The issue is that they’re simplistic and unambitious; with the exception of rare deviations such as “How to Train Your Dragon” and “The Croods,” DreamWorks’ output are rote exercises in self-knowing, cocky protagonists learning the value of teamwork and triumphing over toothless, sneering adversaries.

Your kids deserve more. And — as all-ages cartoons like “The LEGO Movie” and “Zootopia” have indicated — so do you.

In “The Boss Baby,” Alec Baldwin voices an atypical infant conducting a secret mission. He’s not a normal baby, see, he’s part of the secret, semi-divine order of management babies — perennial, precocious newborns tasked with keeping the baby business booming. (Not in that way.) Unfortunately, our suit-swaddled hero’s true identity is discovered by his brother, spelling disaster — unless the two can learn to team up.

Whatever limited humor can be wrung out of Baldwin’s portrayal of a tot wanes within moments, and the rest of the voice cast — Jimmy Kimmel, Lisa Kudrow and Steve Buscemi turn up — seem eager to collect their paychecks and get back home.

“The Boss Baby” is certainly unimaginative, but more than that, it’s just dull. At one point during the film, I turned to my companion to remark on how dull the film was … only to find her sound asleep.

You’ll be bored, unconscious or both. Don’t bother.

The live-action remake of the popular anime film “Ghost in the Shell” has been almost entirely eclipsed by its own controversy in the months leading up to its release. Since the dawn of the 21st century, Hollywood has taken an increased drubbing for casting white actors in Asian roles; the decision to put Scarlett Johansson in the lead, and presumably Asian, role has been cited as a particularly egregious case of whitewashing.

On the one hand, there’s a slightly plausible write-off to those complaints; the character, referred to mostly as “Major” in this film, is not human at all, and thus bears no real race. On the other hand, that’s a stretch of an apology for a tone-deaf move; regardless of how justified the filmmakers felt, textually or commercially, in opting for Johansson, no white actress should ever have been cast in this role.

Oh yeah: So how’s the film?

Visually, “Ghost in the Shell” undoubtedly ranks among the most stunning achievements in recent memory. The director is Rupert Sanders in his sophomore effort (after 2012’s “Snow White and the Huntsman”), and the film was shot by Jess Hall — but the story is the visual effects department, which has rendered a futuristic fantasy world with astounding detail and transfixing beauty. This is the rare film worth watching with no regard at all for the story; it’s breathtaking.

The story is a bit more standard fare — a tale about the boundaries between human and artificial intelligence and a somewhat rote, “Who am I” quest — but any shortcomings of the narrative are washed clean by the visuals (and, admittedly, a very fine performance by Johansson, the propriety of her casting notwithstanding). The controversy hangs like an albatross around the neck of an otherwise strong film.

“The Zookeeper’s Wife,” based on the popular nonfiction book of the same name by Diane Ackerman, is somewhat unimpeachable; it’s a beautifully shot and deftly directed (by Niki Caro) retelling of an inspiring true story. The film is set in late-’30s Poland, where Antonina (Jessica Chastain) and Jan Żabiński (Johan Heldenbergh) run a thriving zoo; when the Nazis take over, they begin using the grounds as a waystation and hiding place for Jewish friends and neighbors smuggled out of the Warsaw ghetto. It’s a story that bears telling, and Chastain is such an unflinchingly strong performer that the film can’t fail. There are notable structural problems — far too much of the film’s running time is spent on the meddling and lecherous intentions of German zoologist Lutz Heck (Daniel Brühl) — and it’s a tale that likely functioned more elegantly as a book than it does as a film. Overall, though, it’s certainly worth a watch.

The Montage: “Out in the Dark,” an Israeli drama about a relationship between a Tel Aviv lawyer and a Palestinian student, is the next installment in ReelQ’s “Reel Stories” series, showcasing films from around the world which deal with LGBTQ themes. The free screening, set for Tuesday night at Alphabet City on the North Side, is being co-presented by JFilm; click here for tickets and info … The lauded “Personal Shopper” opens today at Regent Square Cinema … Increase your film-snob cred by heading to Row House Cinema this week for selections from French New Wave master Jean-Luc Godard, including “Breathless” … The Hollywood Theater will present “1984” for one show early on Tuesday. Tickets and info here.