Weightlifter Tom Duer competes at an international level. In his Lawrenceville gym, however, he trains all comers with a focus on self improvement. 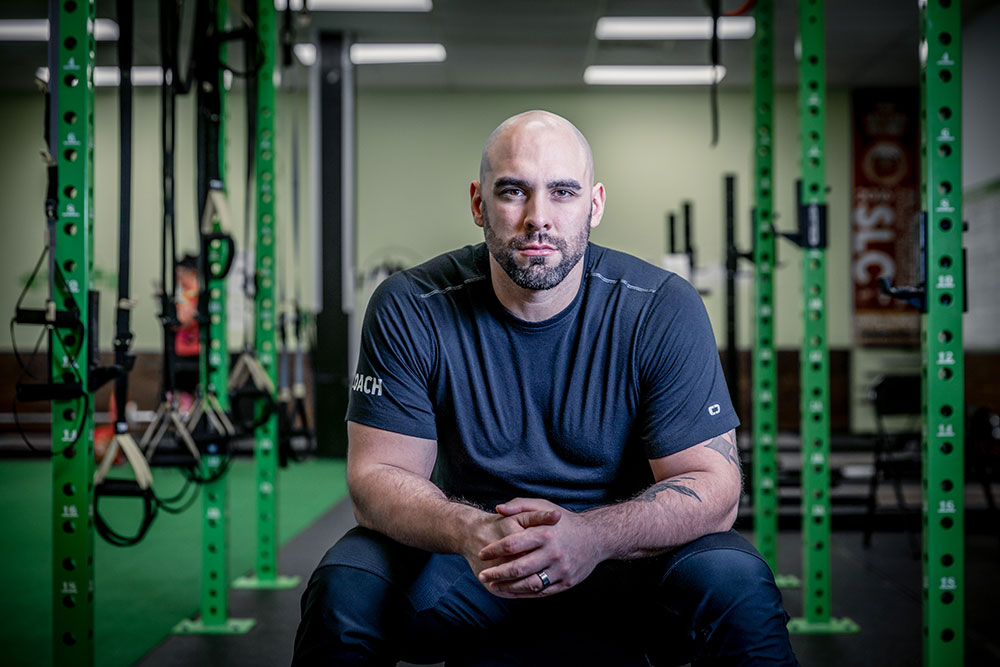 Tom Duer’s arm muscles bulge, Popeye-style, out of the sleeves of his black T-shirt. His arms host a collage of tattoos — a bunch of roses, a dinosaur, the U.S. Steel logo — including, on his shoulder, this sentence: “Ask not for lighter burdens but broader shoulders.”

His are already very broad. They helped him hoist a 407-pound barbell above his head in a national competition.

He ticks off other strong-guy credentials: modeling in various muscle mags; competing as a Mr. Universe contestant; being offered the role of a beefy rugby player in “Sex and the City 2.” (He turned down that job.)

Despite all that, he’s not the kind of guy who would give a testosterone-drenched smirk to the weakling at the gym. Duer is the 33-year-old co-owner of the Pittsburgh Fitness Project, a Lawrenceville gym where he has for the past three years taught Olympic-style weightlifting and other athletic pursuits to people of various shapes, ages and fitness levels.

“We don’t care if you walk in as a star athlete who wants to be a national champion or a mom who has never touched a barbell — or some Joe Schmo off the street. We’d treat you the same,” he says.

Last year, Duer made the United States national team, placing second in the 238-pound-and-under weight class at the Las Vegas International Open. He was on track to qualify for the Olympic Trials. Then he got other, better news: His wife Maggie, a fellow weightlifter, was pregnant. He decided to hold off on chasing his Olympic dreams for another four years.

On a recent morning, he was coaching a group that included a young woman new to lifting, a tiny former gymnast, a hulking guy on the national team and Brandi Darby, who has medaled in national competitions.

“Faster arms,” he tells one lifter attempting a “clean and jerk.” It’s the move the public sees every four years at the Olympics, in which a competitor lifts the barbell to their chest and pauses before hoisting it overhead. He also teaches the “snatch,” a highly technical move from the ground to overhead.

The training session is a mix of laughter and grunts. “The vibe is easy here,” says 37-year-old Darby, the first legally blind competitor in recent history to win a medal at a national competition. “Tom is casual when he needs to be but also intentional and disciplined when he needs to be.”

As Duer tells his athletes, “When you get on that stage, it’s like the scariest thing — that means nothing in the world. But even if you don’t make any lifts, you can go home and the sun always rises.”

Duer says his attitude toward weightlifting mirrors the one he developed in his own life after surviving a chaotic upbringing in Williamsport, Pennsylvania. His happy childhood was interrupted at age 10 when his father, Jack, died from a pulmonary embolism in the family bathroom. He says his mother suffered from addiction back then. (Now in recovery, she helps people with addiction.)

Throwing himself into sports was his way of getting positive feedback. He played football at West Chester University and equated acceptance with his performance on the field. But when he injured his shoulder, he felt like it diminished his worth. He kept throwing himself into athletics, going from bodybuilding to male modeling to CrossFit before settling on weightlifting. It’s the sport where he feels at home.

After many years of therapy, he says he has a much more balanced approach to sports and life. To help other kids who might be facing similar problems, he has for the past seven years been a Big Brother. “I wanted to instill the sense of being valued as a human with no strings attached,” he says. In 2017, the organization awarded Duer its Pennsylvania Mentor of the Year honor.

In a bittersweet family footnote, after he became a Big Brother, he learned that his father had started the Indiana, Pennsylvania, branch of Big Brothers Big Sisters.

He loves being a father. Midway through the training session, Maggie, a physician’s assistant and his coach at competitions, comes in with baby Logan, a little girl with her own toy barbells. Mom and Dad tease back and forth about the time he ignored her coaching during a competition and failed.

“I was secretly happy because I got a good told-you-so moment,” quips Maggie, one of the few women to coach backstage at national competitions.

“It was a very quiet car ride home,” Duer says.

The two met on the online dating app Tinder, bonding over their love of lifting heavy things. Maggie, a slim athlete who can lift 180 pounds, says watching a video of herself crushing it in the gym has motivated her before job interviews.

“It’s such a confidence builder for people,” Duer adds. “The actual weightlifting is the least important thing that we do. It’s the stuff you learn about yourself and dealing with adversity.”