Move over, chestnuts roasting on an open fire—the Potato Patch is open! 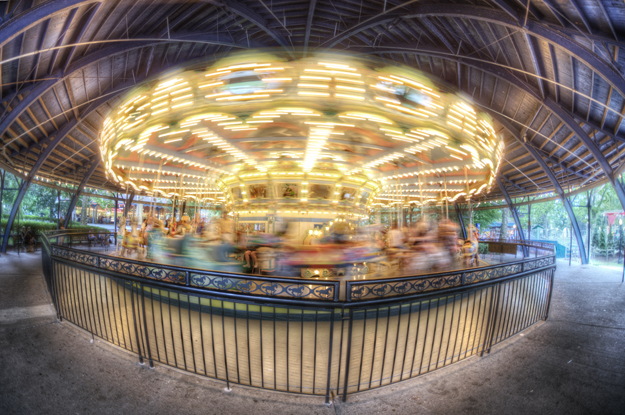 There are plenty of Pittsburgh traditions to embrace each holiday season: Light Up Nights, The Nutcracker, The Rink at PPG Place. Still, one iconic locale has always remained shuttered: Kennywood.

‘Til now, that is. This month, guests will receive their first-ever glimpse of the park as a winter wonderland—complete with lights, caroling, seasonal snacks (think kettle corn and s’mores) and Potato Patch fries.

During the 100-plus years of operation, Kennywood has never opened for the holidays. So, why now?

“This is something we’ve talked about for many years,” Filicko explains, “especially since we’ve opened [during] weekends in September and October. Halloween Fright Nights have been very successful—this was their 10th season.”

Kennywood’s Holiday Lights festivities are limited to the front half of the park, mostly around the lagoon near the Jack Rabbit and The Racer. There will be hundreds of thousands of lights on display, including 68 8-foot LED Christmas trees (accounting for more than 18,000 individual lights).

Rides like the Log Jammer and the roller coasters can’t operate during the winter, but a number will be running: the Merry-Go-Round, the Kangaroo, the Paratrooper and several attractions in Kiddieland. Having received a fresh holiday makeover, The Olde Kennywood Railroad will also be in operation this winter.

New attractions—from a look at It’s a Wonderful Life, courtesy of the Jimmy Stewart Museum, to an ornate model-train display—have also been brought in specifically for the event. Additionally, local choirs and bell-ringing groups, who enthusiastically volunteered to be a part of the experience, will be present to perform various holiday tunes.

“The same day that we announced the event, people started coming to us,” Filicko says. “There’s been a great deal of interest.”

That’s not to imply that turning Kennywood into a winter wonderland has been effortless. To make it happen, the park staff purchased a dazzling array of holiday décor and made tough decisions about which rides could operate—and those were just the most obvious hurdles.

With all the changes, big and small, it’s certain that people will see the classic landmark in a new light. Milk and cookies may become a thing of the past once Santa tastes Potato Patch fries.

This article appears in the December 2011 issue of Pittsburgh Magazine.
Categories: Arts & Entertainment