The park's popular Holiday Lights event is back and better than ever. 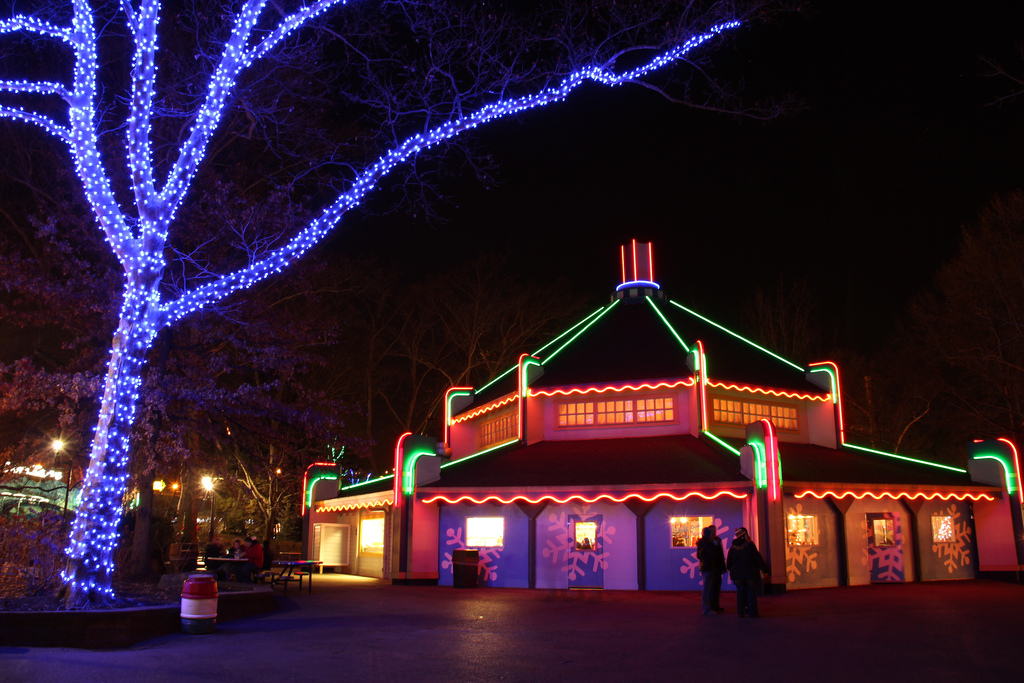 Kenny Kangaroo Gets Festive at Holiday Lights
Hey — Kennywood’s open! No, you can stop looking at your zipper. We’re referring to your favorite amusement park. Kennywood is now attracting visitors with its second annual Holiday Lights event, and it’s bigger, better and longer than last year. The park is open every Friday and Saturday through Dec. 30 (plus bonus nights, Dec. 26 and 27) with one-million lights, over 50 decorated trees from the Indiana Tree Growers Association and attractions at the Kennyville Stage and original Potato Patch.

Drink hot cocoa and nibble on treats as you wander in awe through the holiday display. Christmas music flowing from the park speakers, a live choir and shows at the lagoon are sure to heighten your holiday spirit. But Kennywood isn’t complete without a ride or two, right? The Turtle, a holiday Ghostwood Estate, Paratrooper, Merry-Go-Round, Gingerbread Express, Kangaroo, Old Kennywood Railroad, Auto Race and several Kiddieland rides will all be open for your enjoyment. Just don’t forget to tell Santa your Christmas wish — and take a picture with the big guy in his roller coaster car at the Racer.

Pittsburgh Premiere of 'Gruesome Playground Injuries' at Off the Wall
Among ice-breakers, comparing scars is always a good one. Go over the list of mishaps you suffered as a child, and you’ll learn a thing or two about a person — or at least the trouble they’re capable of getting into. Such is the driving force behind Rajiv Joseph’s acclaimed Gruesome Playground Injuries, receiving its Pittsburgh premiere at the new Off the Wall Theatre in Carnegie. When After Dark visited Off the Wall's new digs in October, they were already shining in a perfect venue; an even more intimate script gives them a chance at a second hit. Tony Bingham and Erika Cuenca star as Doug and Kayleen, who met in an emergency room as children and keep bumping into one another as life goes on. Injuries runs for only three weekends, so get your tickets now.

A Twin Bill of Crowd-Pleasers at City Theatre
There’s a particularly festive double-feature going on at the City Theatre this week — even if only one of the shows is about the holidays. In the big theater, longtime audience favorite Kimberly Richards dons the habit once again as the stern yet lovable Sister in Sister’s Christmas Catechism: The Mystery of the Magi’s Gold. In the Hamburg Studio Theater, meanwhile, rave reviews and sellout crowds have heralded Tami Dixon’s one-woman ode to Carson Street and surrounding environs, South Side Stories; demand has been so intense that the run has stretched into January. For more on both hits — and a review of South Side Stories — check out this week’s edition of After Dark!

In Theaters: After several weeks of cinematic drought, things finally kick in once again this weekend. Anthony Hopkins takes a turn as the great Alfred Hitchcock in the appropriately named Hitchcock; and director Peter Jackson tries to stretch one relatively short book into three very long films, starting with The Hobbit: An Unexpected Journey. PM Film Editor Sean Collier appeared on the 102.5 WDVE Morning Show this week with his reviews, and they weren't particularly encouraging. The Hobbit is fine, but more for dedicated fans of Tolkein's work, and Hitchcock is…misguided. He also doesn’t think Anthony Hopkins looks like Hitchcock.

With three days and three locations, Chatham Baroque wants to fill your weekend with vocal and instrumental holiday ensembles featuring local musicians and special guests. Call 888/718-4253 to purchase tickets and get more information on the event and locations.

Dreading the cold? Escape to a local gallery on Friday or Saturday. Shadyside’s The Gallery 4 brings you Victorian-style art and live botany with two free accompanying displays: "The Sepia Show" and "Terrariums: Living art under glass by Holly Bomba." Call 412/363-5050 for more details.

This article appears in the December 2012 issue of PMWeekend.
Categories: Things To Do