Johnny Mathis Is Coming for a Sleepover

Three sisters from Ambridge became such devoted fans of the crooner Johnny Mathis that they eventually welcomed him as a houseguest. 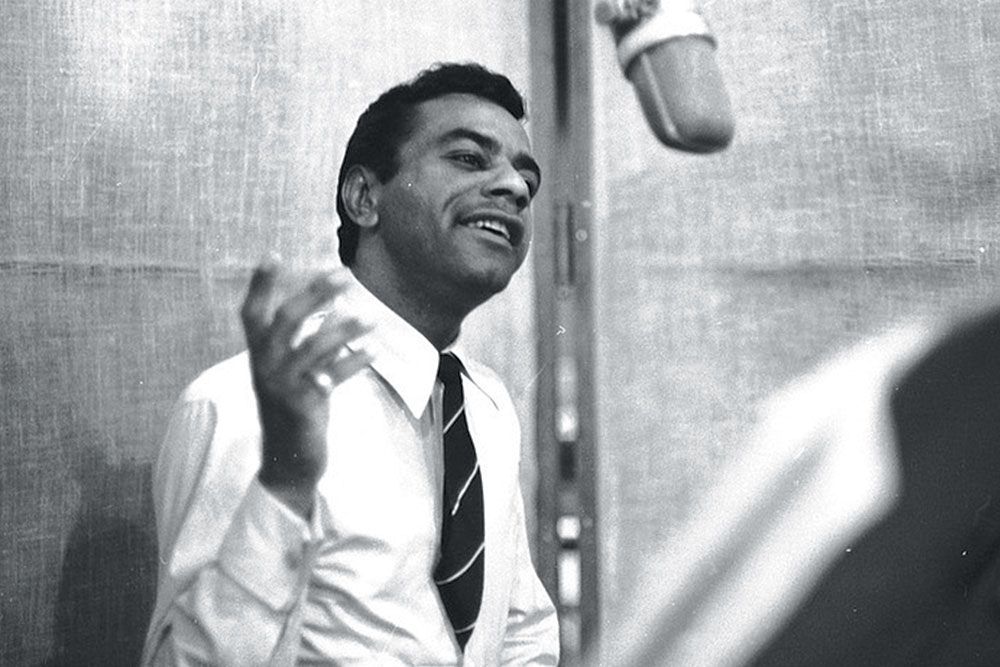 In December 1957, three sisters from Ambridge were in New York City on a pre-Christmas trip when they stopped at a coffee shop in the old Taft Hotel. It was Friday the 13th, but their luck was good; after a few minutes, a familiar young man walked in. Dianne Malay recognized him first; “That’s Johnny Mathis,” she exclaimed. “Go get his autograph!” Her older sister, Oragene, approached the singer; he said he would be sitting at the next table.

Mathis, then just 22, was having a phenomenal year; he released his first big hits — “Wonderful! Wonderful!,” “It’s Not for Me To Say” and “Chances Are” — and made an appearance on “The Ed Sullivan Show.” Oragene and her sisters were thrilled when he stopped to talk with them and sign autographs. They became ardent fans, attending his concerts during the golden age of Pittsburgh nightclubs. He drew crowds first at Lenny Litman’s Copa, Downtown on Liberty Avenue, before becoming a regular attraction at the Twin Coaches on Route 51 in Rostraver, Westmoreland County.

“We often traveled to see him too,” Malay says. “Chicago, Cleveland, Connecticut, Philadelphia, New Jersey. We would always sit close to the stage.”

In late October 1961, the sisters knew Mathis would be flying into the old Greater Pittsburgh Airport. “Back then, it was fun to go to the airport, and you could go out to the plane,” says Oragene. During that visit on the tarmac, Mathis’ manager asked Oragene and her older sister, Becky, if they had a car. “‘Yes,’ we said, ‘that’s how we got here.’” With the manager at the wheel, the Malay sisters found themselves riding with Mathis to a Steubenville concert and back to Pittsburgh afterward.

“We went Downtown to the Hilton,” says Oragene, “but then Johnny told his manager that he was coming home with us. He didn’t come right out and say it, but I think he wanted to cheer up my other sister Dianne, who had just had surgery … When we got there, my mom really didn’t say anything.” They put Mathis in Becky’s room, and Becky moved into Oragene’s room for the night. “In the morning, my mother told us to be quiet,” Oragene remembers. “He didn’t get up till 10 a.m., and he was surprised we let him sleep in so late.” They ate breakfast and then drove him back Downtown. The next night, Mathis sang to a crowd of 5,000 in the new Civic Auditorium (later the Civic Arena).

In the 1970s, Mathis started singing with the Pittsburgh Symphony at the Syria Mosque in Oakland; his relationship with the symphony has flourished. In an interview with Bryan Sejvar at WQED-FM in 2015, Mathis said, “Heinz Hall is one of my favorite places in the world. And to sing with that orchestra is a blessing.”

Both of Oragene’s sisters have passed away, but she still listens to Mathis’ CDs in her car and attends his concerts when he comes to Pittsburgh. She usually takes a flower — often a single rose — and hands it to him on stage. She got a hug and kiss from Mathis in 2015 at Heinz Hall. It’s a relationship that has continued since that chance encounter in the Taft Hotel. As Oragene will tell you, “I still have that autograph.”

Thanks to Minette Seate, Mike Seate, Kim Love and Brian O’Neill for help with this story.

This article appears in the November 2019 issue of Pittsburgh Magazine.
Categories: Rick Sebak