CEREMONY
Before its gates opened to the public, Jes and Bryan exchanged vows at Kennywood Park (4800 Kennywood Blvd., West Mifflin; 412/461-0500, kennywood.com) near the Lost Kennywood fountain during a unique self-uniting ceremony. Six passages were read by friends and family members before Jessica Dillon, a close friend of the bride, announced the two as man and wife. To even further personalize the ceremony, Jes and Bryan arranged a handpicked playlist, including love ballads by Iron & Wine and Etta James, to serve as musical accompaniment.

FLOWERS
Jes carried a bright bouquet of silk sunflowers wrapped in white ribbon. Both the bridal bouquet and the flowers used for the ceremony and reception were crafted by the bride’s mother using materials from Michaels (michaels.com) and Pat Catan’s (patcatans.com). 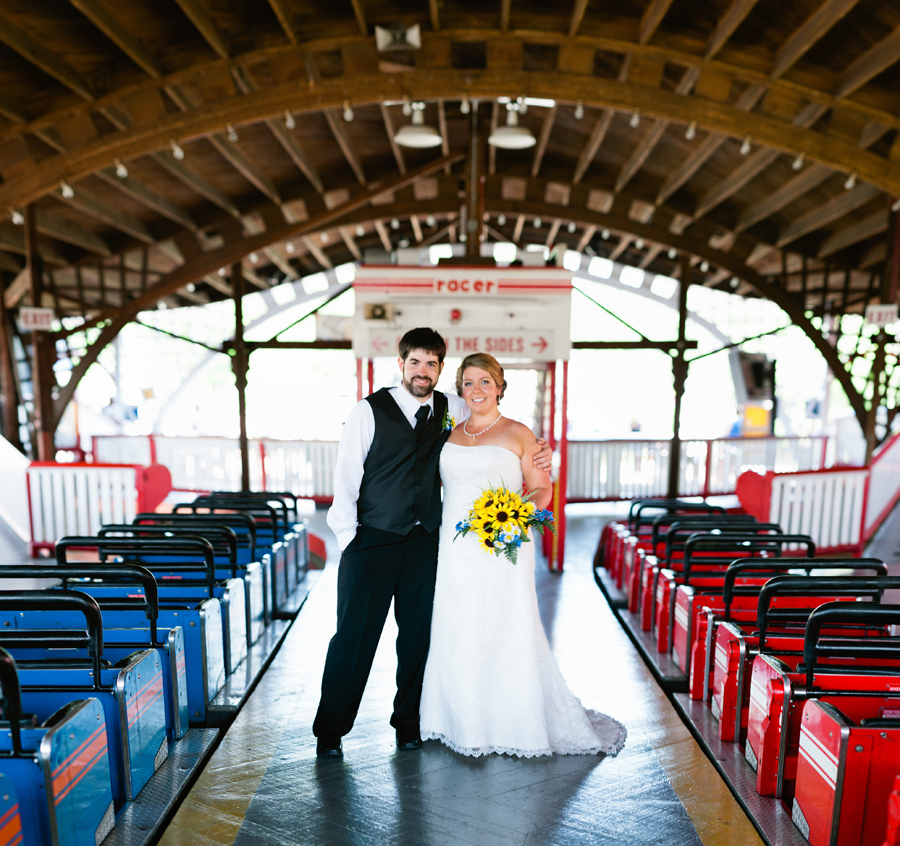 PHOTOGRAPHER
Jes and Bryan were thrilled to learn that they had won a Veronica Varos (330 46th St., Lawrenceville; 412/969-2550, veronicavaros.com) wedding photography package through a contest held by Secret Agent L (secretagentl.com).

ON THE BRIDE
The bride wore a Maggie Sottero gown with a lace overlay from Bridal Beginning (450 Cochran Road, Mt. Lebanon; 412/343-6677, bridalbeginning.com) and a pair of David Tate kitten heels (zappos.com). Impressively, she made her own jewelry and hairpiece with goods from Michaels and Pat Catan’s. 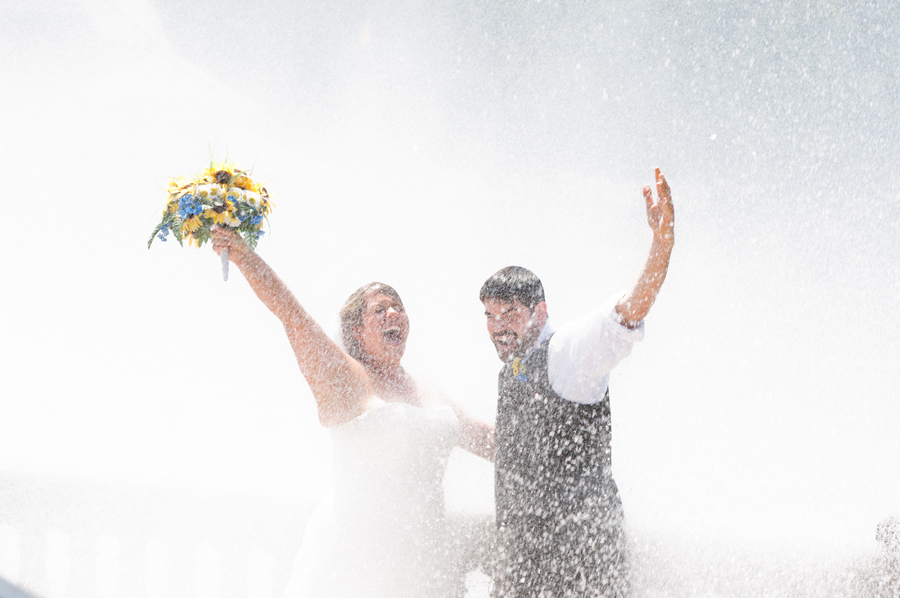 ON THE GROOM
Bryan wore a casual black tuxedo and vest from Men’s Wearhouse (menswearhouse.com). 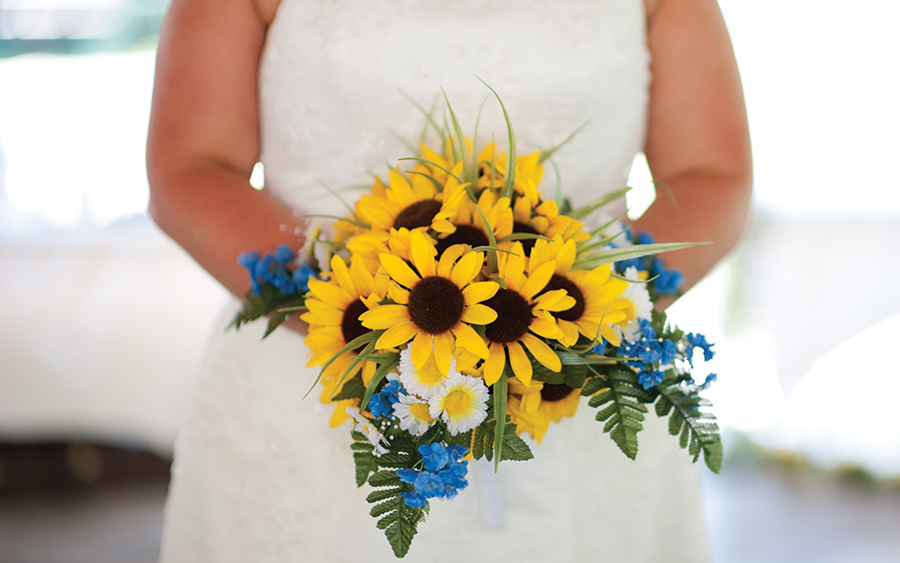 RECEPTION
Following the reception, the couple was joined by guests in one of Kennywood’s park pavilions, decorated for the occasion with blue and yellow streamers, vines of sunflowers, and tables marked with sand-filled beer bottle vases of sunflowers. Stratwood Catering (1977 Lincoln Way, White Oak; 412/672-9659, stratwoodcaterers.com) whipped up a picnic-style buffet that included pulled pork, hamburgers, potato salad and watermelon.

After the meal, guests danced and listened to speeches given by the couple’s friends and relatives before heading back into the park itself for a few rides. Jes and Bryan even rode the Pittsburgh Plunge after standing in its wave at the bottom to “trash” the gown and tuxedo! 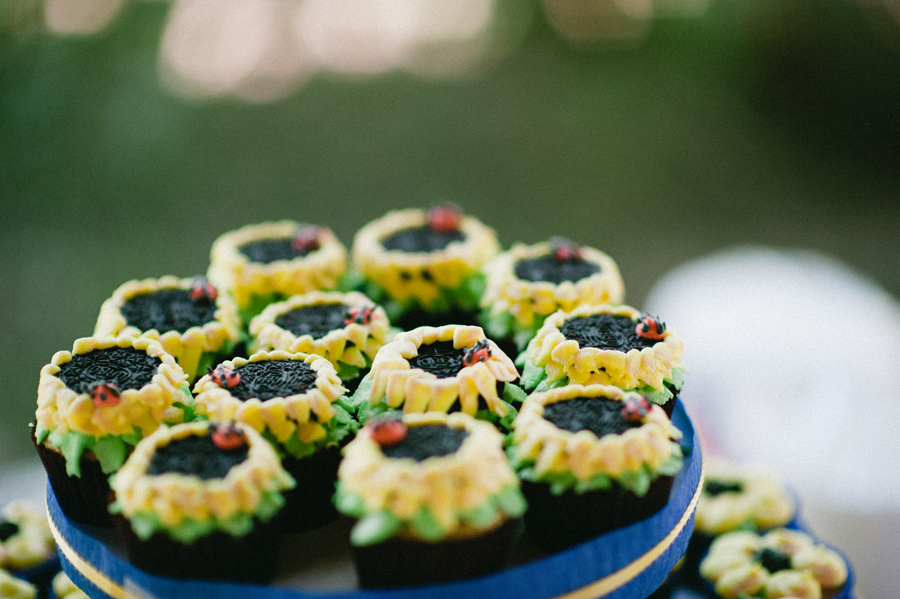 CAKE
Missy Sorg of Café Solstice (cafesolstice.com) created a tiered assortment of Oreo-filled chocolate and vanilla cupcakes that were iced to resemble sunflowers.