The owner of the fun-filled Upper Lawrenceville wine bar introduces her customers to lesser-known, but powerfully delicious, varietals. 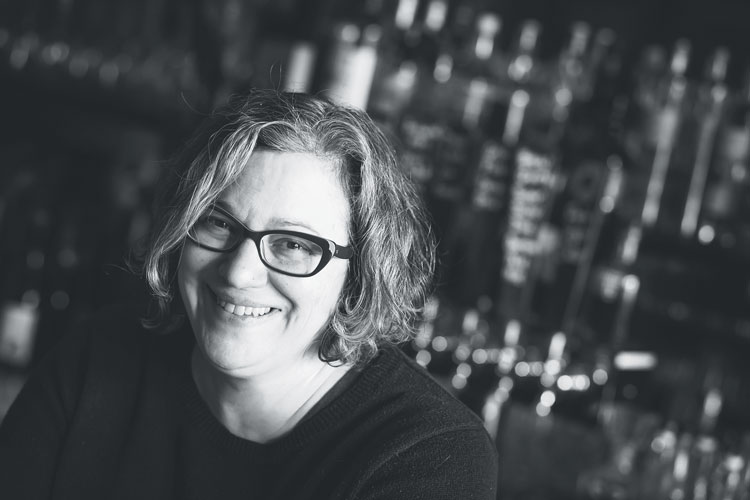 Jamie Patten, owner of The Allegheny Wine Mixer, is on a mission to open people’s minds about wine. “Americans can sometimes be weird about wine. They think it’s elitist or that it’s hard to approach. And there’s really no reason for that,” she says.

Her establishment in Upper Lawrenceville is the antithesis of a stereotypical wine bar. Stuffy? Precious? Reverent? Forget it. “Wine is something that is for the people. People can even make it in their basement,” Patten says.

She decorated AWM’s walls with ghoulish paintings of Edward-Gorey-inspired, wide-eyed children and creepy portraits of cats. There is a photocopy of the actor and musician John Stamos (the original was stolen a few years ago) in mulleted “Full House” glory on the door of the men’s restroom.

Then again, Patten says, “People talk about this being the least pretentious wine bar ever, but if you look at our list it’s actually pretty snooty.”

The Certified Sommelier makes it her business to introduce lesser-known but powerfully delicious wines to her customers. Varietals including Arabako Txakolina (Spain), Greco-Fiano (Italy), Pais (Chile) and Fendant Valais (Switzerland) are on the menu and served by the glass.

Patten is a lifelong service-industry veteran; she started working in restaurants when she was in high school. While she was working at Belle Cuisine in Richmond, Va. at the twilight of the 1990s, she started to get serious about wine, thanks to her employer’s passion for the beverage. “That’s when I started learning that there was more to wine than just, ‘I like this one,’” she says.

She worked in a cafe and wine bar, Cafe Gutenberg, where she deepened her skill set. When she and her husband John Venable moved to Pittsburgh in 2005, however, her plans to open a wine store changed when she realized that Pennsylvania liquor law doesn’t allow for direct-to-consumer sales.

Patten’s studied approach and whimsical attitude makes The Allegheny Wine Mixer a beacon for the democratization of wine. “We take our product really seriously, but we don’t take ourselves very seriously. We know what wine is really for,” she says.

Patten says she adapted this recipe from Bill Buford’s “Heat.” “It’s about as simple and elemental a recipe as you’ll find — no browning, no sautéing, no nothing; just throw everything in a pot, throw the pot in the oven and cook the living crap out of it — but the long, low-and-slow cooking method makes for incredible depth of flavor. At home, we serve peposo over gnocchi or polenta, but at AWM we serve it on slider buns with a fresh grating of Pecorino.”