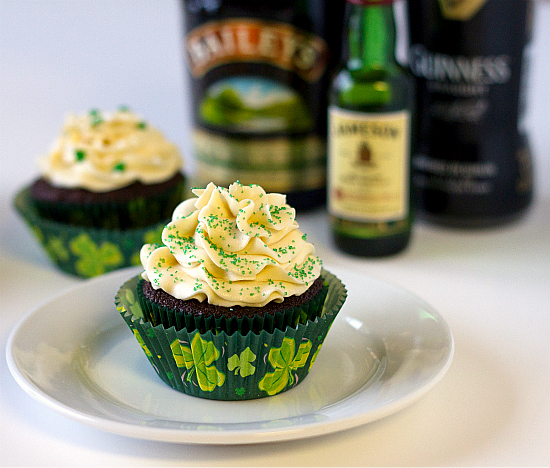 As I mentioned on Friday, I have been doing some experimentation with the beer and chocolate combination. The Guinness-chocolate ice cream that I made totally kicked butt, so I couldn’t wait to see how I liked beer and chocolate in my cake. The answer? I like it, a whole heck of a lot. This was my first time doing Guinness-chocolate cakes, and I was totally optimistic that I would love it, and I was definitely right.

These cupcakes are fashioned after the popular “Irish Car Bomb” cocktail that consists of a shot of Baileys Irish Cream and Irish whiskey dropped into a pint of Guinness. I have never had one myself, but I’ve heard that if you can get it down before it curdles, it’s smooth, delicious and almost tastes like a milkshake. I’ll believe it because these cupcakes are all sorts of delicious. They’re also very boozy. Consider yourself warned. 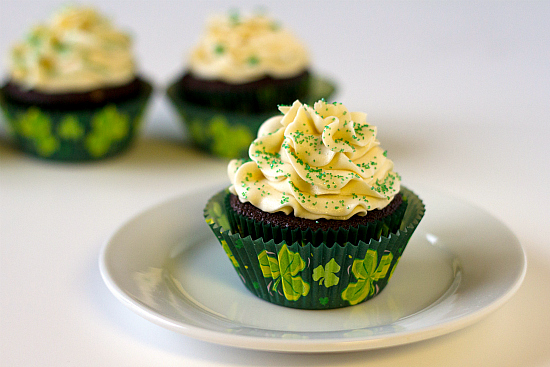 These cupcakes consist of a Guinness-chocolate cake base, which has a wonderful depth of flavor and is also supremely moist. The centers of the cupcakes are cut out and filled with a chocolate ganache that has been spiked with Irish whiskey. And to top it all off, the frosting is my favorite vanilla buttercream that has been doused with a serious amount of Baileys Irish Cream. 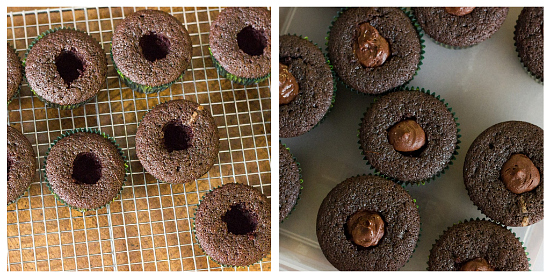 While you can’t really taste the beer in the cupcakes (it serves as more of a flavor enhancer for the chocolate), you can definitely taste the alcohol in the filling and the frosting. Which I think means that the cupcakes are a success. Plus, they got six big thumbs up!

I think I need to start converting more drinks into baked goods, this was too much fun (and way delicious!) 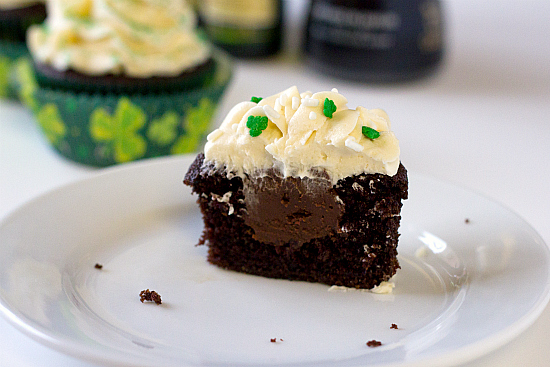 For the Whiskey Ganache Filling:

For the Baileys Frosting:

1. To Make the Cupcakes: Preheat oven to 350 degrees F. Line 24 cupcake cups with liners. Bring the Guinness and butter to a simmer in a heavy, medium saucepan over medium heat. Add the cocoa powder and whisk until the mixture is smooth. Cool slightly.

2. Whisk the flour, sugar, baking soda and salt in a large bowl to combine. Using an electric mixer, beat the eggs and sour cream on medium speed until combined. Add the Guinness-chocolate mixture to the egg mixture and beat just to combine. Reduce the speed to low, add the flour mixture and beat briefly. Using a rubber spatula, fold the batter until completely combined. Divide the batter among the cupcake liners. Bake until a thin knife inserted into the center comes out clean, about 17 minutes. Cool the cupcakes on a rack.

3. To Make the Whiskey Ganache Filling: Finely chop the chocolate and transfer it to a heatproof bowl. Heat the cream until simmering and pour it over the chocolate. Let it sit for one minute and then, using a rubber spatula, stir it from the center outward until smooth. Add the butter and whiskey and stir until combined. Let the ganache cool until thick but still soft enough to be piped.

4. To Fill the Cupcakes: Using a 1-inch round cookie cutter (or the bottom of a large decorating tip), cut the centers out of the cooled cupcakes, going about two-thirds of the way down. Transfer the ganache to a piping back with a wide tip and fill the holes in each cupcake to the top.

5. To Make the Baileys Frosting: Using the whisk attachment of a stand mixer, whip the butter on medium-high speed for 5 minutes, scraping the sides of the bowl occasionally. Reduce the speed to medium-low and gradually add the powdered sugar until all of it is incorporated. Add the Baileys, increase the speed to medium-high and whip for another 2 to 3 minutes, until it is light and fluffy.

6. Using your favorite decorating tip, or an offset spatula, frost the cupcakes and decorate with sprinkles, if desired. Store the cupcakes in an airtight container.